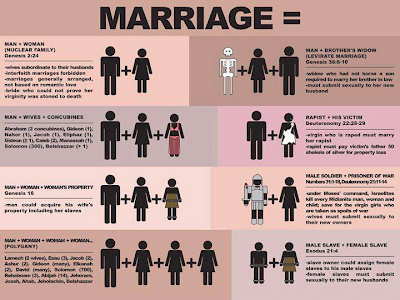 Click on the image to enlarge.
Late last year I wrote about the true Biblical model for marriage and found that -contrary to what self-enriching whore Maggie Gallagher and the folks at the National Organization for marriage or KKK loving Tony Perkins at Family Research Council bleat about marriage between one man and one woman - the true models depicted in the Bible rarely in fact support the Christianists' claims. Instead, the majority of the Bible's model's for marriage are something quite different unless one selectively ignores the many passages that show Gallagher and Perkins to be liars. The image above (which I found via Joe.By.God) illustrates what the Bible really says about the models for marriage. Isn't it strange how those who claim to worship the Bible as the literal "word of God" ignore so many inconvenient passages?

As I have noted many, many times before, if one is going to claim that the Bible is inerrant and the literal word of God, one doesn't get to pick and choose which passages to uphold and which ones to ignore. It's an all or nothing proposition - at least if one is intellectually and morally consistent. Which we all know is not true of Christianists. Their hallmarks are lying, disseminating hate and, of course rank hypocrisy.
Posted by Michael-in-Norfolk at Monday, October 03, 2011