NOM Says It Will Defy Campaign Disclosure Laws Yet Again 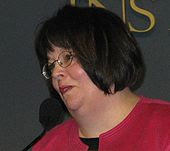 When is someone going to put Maggie Gallagher and Brian Brown's fat nasty asses in prison? The same goes for some Catholic bishops that are working hand in had with NOM to break the law. Their front organization for the Catholic Church and/or some other secret deep pocket types that hide behind the NOM moniker continues to flout the campaign disclosure laws and no one seems to be getting prosecuted for or having their campaign and propaganda activities shut down by the authorities. It's outrageous and now NOM says it is going to basically tell the state of Minnesota to go f*ck itself. The Minnesota Independent looks at NOM's latest lawless activity. Here are some highlights:

A coalition of groups working to convince voters to pass a constitutional amendment to ban same-sex marriage said on Tuesday that it would not follow new rules being proposed by the Minnesota campaign finance board, which watchdog groups say would violate the law. Minnesota for Marriage is a partnership between the Minnesota Family Council, the Minnesota Catholic Conference and the National Organization for Marriage.

Last week, the Minnesota Campaign Finance and Public Disclosure Board announced it was considering updating its rules to close loopholes in the ballot initiative’s reporting requirements. . . . . The guidance would heighten public disclosure around campaign spending and will be debated before the board this week.

Common Cause Minnesota saw Minnesota for Marriage’s announcement as the prelude to a lawsuit. NOM has filed lawsuit in a half dozen states including Iowa, Maine and California where judges have upheld those states’ campaign disclosure laws.

“Minnesota has become ground zero for a national fight over whether the public should know who is behind political spending,” said Mike Dean, Executive Director of Common Cause Minnesota. “Last year, the legislature and governor required that all political spending by independent expenditure groups and groups supporting constitutional amendments be disclosed.”

He said that Minnesota for Marriage “announced their intention to violate this very provision of Minnesota’s disclosure law.”

These hate filled people and their demands for special rights - indeed to be totally above the law - sicken me and make me wish for a religion free world. The world would truly be a better place.
Posted by Michael-in-Norfolk at Tuesday, October 04, 2011

This may be petty, but I believe people should refer to Gallagher as the NO-neck monster.
You are always right, she is building a career and being paid to attack me, and I wish someone would put a stop to it. Pronto