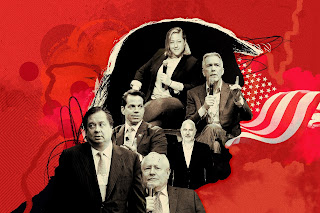 Frighteningly, the Republican Party now opposes not only Democrats but democracy itself.  The reason being that as their base dies off and younger voters and suburbanites flee the GOP, the only way to continue to win elections is to restrict voting rights to "the right people,"  namely reactionary whites, white supremacists and Christofascists. It is all party of the GOP agenda to allow a minority of citizens to control government over the protest and rights of the majority, something that is aided by the anti-democratic Senate and the Electoral College which gives disproportionate power to rural, backward states. None of this is a new trend, but with Donald Trump many Republicans - it would appear most, in fact, now appear to be willing to give control to an autocrat so long as that supports the GOP's reverse Robin Hood and anti-democracy policies.  The hold outs?  The Never Trumpers and what's left of any form of conservative intelligentsia.  A piece in New York Magazine looks at this group that seemingly will continue to resist the GOP assault on democracy, particularly since they see that the threat is very real.  Here are highlights:

One of the most predictable developments of the post-Trump era was that the small band of anti-Trump conservative intellectuals and Republican officials would quickly melt away. They had been repulsed by Donald Trump’s combination of grotesque character and ideological heterodoxy — opposing American alliances, free trade, and so on – but when given the chance to support Republicans who believed in traditional Reaganite principles and weren’t career criminals, politics would go back to normal and they would return to the fold.

Instead, something surprising has happened. Anti-Trump Republicans are refashioning their identity as pro-democracy conservatives.

Here are a few examples to give a flavor of their thinking. It’s not close to an exhaustive list:

David Frum, the former Bush speechwriter who was one of the first conservatives to recognize the party’s collapse into revanchism, wrote a column for The Atlantic arguing that Trump’s rise reflects not the tendency of a demagogue to inflame the majority, as the Founders feared, but the power of a minority. Frum called for democratic reforms to stop the conservative minority, given disproportionate representation by the House, Senate, and Electoral College, from exercising control. “The retreat from majority rule has not only weakened the American system’s fairness, it has also wobbled that system’s stability,” he argued. “The path back to constitutional normality depends upon a reinvigoration of the majoritarian principle.”

Anne Applebaum has argued for granting statehood to the District of Columbia. The Bulwark, a magazine that has become a hub of anti-Trump conservatism, has crusaded in favor of protecting and expanding voting rights. Its editor, Jonathan Last, argues that Democrats should prioritize pro-democracy reforms . . .

Any bill to expand voting rights would be subject to a filibuster and stand no chance of enactment in any form. Therefore, democratization requires eliminating or at least scaling back the filibuster, which is itself an impediment to democracy. Several anti-Trump conservatives, like Max Boot and David Brooks, have already endorsed this step.

Gary Schmitt, a scholar at the American Enterprise Institute and the former executive director of the neoconservative Project for the New American Century, has argued that the Senate filibuster prevents rather than enables deliberation and debate. Schmitt made this case four years ago and reiterated it last month.

Why have a group of conservatives who not many years ago were prepared to happily vote for the likes of Ted Cruz come to embrace a cause that few of them displayed any interest in? For political elites, Trump’s unconcealed desire to follow the path of figures like Orban, Erdogan, and Putin became the primary stakes of the era’s political conflict. Their activism put them in touch with scholars of authoritarianism and democracy who studied democratic backsliding, and the insights of those thinkers became increasingly evident in the Never Trumpers’ polemics.

Trump’s exploitation of Republican voter-fraud paranoia made it perfectly clear to anybody not in his thrall that the entire Republican agenda of restricting ballot access is part and parcel of Trump’s authoritarian ambition. The connection has grown more obvious still, as Republicans seized on Trump’s vote-fraud propaganda as a pretext to enact vote-suppression measures across the country.

Anti-Trump conservatives have a second motive for embracing democratization. Many of them hope to reclaim and reform the Republican Party as a sane vehicle for center-right governing. They won’t have an opportunity to do so until the party realizes Trumpism is a political dead end. . . . . Democratization, and its promise of forcing Republicans to compete for a majority or something close to it, is the most potent tool to force the party to the center.

Obviously, anti-Trump conservatives correspond to a small sliver of the voting public. None of these people has a vote in the Senate, which is the body that will ultimately decide whether or not to implement pro-democracy reform.

But their influence is not negligible. The main argument against curtailing the filibuster and implementing reforms like automatic voter registration, nonpartisan redistricting, and statehood for D.C. and Puerto Rico is that it would be a Democratic Party “power grab.” The Never Trumpers can supply a high-profile media voice to credibly articulate nonpartisan reasons to bolster the democratic character of the electoral system.

As Trump’s clumsy effort to cancel the election and seize an unelected second term sputtered to its end, a realization settled on all parties that we are merely living in a temporary armistice. Trump was elected because most Republicans refuse to accept the legitimate right of a majority of democratic voters to govern. He launched — or more precisely, escalated — a war against democracy. Everybody can see the stakes. There is no going back to “normal” now.