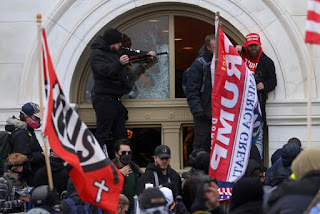 When I started following the so-called "Christian Right" three decades ago, I quickly came to believe that a majority of evangelicals, Southern Baptists and similar denominations had strong white supremacist tendencies.  This belief has only intensified in the years since and culminated in the January 6, 2021, attack on the U.S. Capitol when white supremacists and evangelical Christians marched side by side as they sought to disrupt the certification of the 2020 election and in essence overthrow American democracy. As a piece in Salon lays out, increasingly white evangelicals and white supremacists are one and the same.  Both want white control of the nation and demand that special deference be given to their beliefs.   Indeed, anything that infringes on their ability to discriminate and abuse others is deemed to be an attack on their "freedom."   Here are article excerpts:

In QAnon's alternate reality, a shadowy figure known as "Q" — who has been notably silent of late — sends out secret "drops" containing messages, clues and orders to true believers. . . . . Ultimately, QAnon is an updated version of the infamous anti-Semitic libel "Protocols of the Elders of Zion," a conspiracy theory which has existed since the early 20th century and played a central role in the Holocaust.

It is a con that lures in the weak-minded and the vulnerable. It is a political force with ambiguous but substantial influence within the neofascist Republican Party. It could also be described as a live-action roleplaying game for lonely and socially alienated adults who are desperate for a sense of agency, meaning and community in their lives.

QAnon also has elements of religion. Adrienne LaFrance writes at the Atlantic: . . . . Does it matter that basic aspects of Q's teachings cannot be confirmed? The basic tenets of Christianity cannot be confirmed. Among the people of QAnon, faith remains absolute. True believers describe a feeling of rebirth, an irreversible arousal to existential knowledge. They are certain that a Great Awakening is coming. They'll wait as long as they must for deliverance.

As a new religion, the emergence of QAnon coincides with and has fueled the Republican Party and Trump movement's embrace of right-wing terrorism and other political violence.

Terrorism and extremism expert Colin Clarke told the Independent how white right-wing Christian evangelicals are being radicalized by the QAnon conspiracy theory into committing acts of terrorism:

"It's not going to get better anytime soon, unfortunately… Conspiratorial thinking is very closely associated with high-anxiety situations and endless wars, elections and national tragedies," he said.

Moreover, Clarke said there has been a "crossover" between the QAnon systems and evangelical Christianity that is going to imbue right-wing extremism with the sort of violent fanaticism more associated with al-Qaeda or Isis.

Robert Jones, CEO and founder of the Public Religion Research Institute (PRRI) . . . . .  explains how Trump's insurrection and the Capitol attack should also be understood as expressions of white supremacy and Christian nationalist violence. He also details how white evangelicals actually believe that they are being oppressed and have become victims in America — false beliefs which make them very susceptible to conspiracy theories such as QAnon, political extremism and, in the worst-case scenario terrorism and political violence such as we witnessed on Jan. 6. Jones also explores why white evangelicals are so loyal to Donald Trump and his political cult and what that reveals about American politics and society.

Polling shows that even after the insurrection on Jan. 6, there are still supermajorities of white evangelicals reporting that they hold favorable views of Donald Trump. There was a majority of evangelicals saying before the 2020 election that they saw President Trump as being called by God to be president. That has been true throughout Trump's presidency.

The power of Trump's appeal is a backward nostalgia which involves going to back to a previous time when white Christians had more power in the United States. "Making America Great Again" signals to that desire to "restore" that state of affairs.

During Trump's campaign speeches, and even on Jan. 6, Trump would say things such as, "If you're not ready to stand up and fight, America as you know it will be over. You're going to lose your country." But who is the "your"? Who is the "our"? Trump is appealing to a white Christian base. What he is communicating is, "I'm the person who's going to help you continue to hold onto your sense of ownership of this country."

For Trump's base of voters that is what it is all about. His appeal is not about policies. It's certainly not about abortion or same-sex marriage. The appeal is based around a single issue.

Looking at the Jan, 6 attack, . . . .  There were Bibles, there were crosses, there were Bible verses on signs. There were flags that said things such as, "Trump is my president, Jesus is my savior." There were shofars being blown, not by Jews but by Christians, who were convinced they were fulfilling some prophecy by bringing Trump into office.

Perhaps the image that stuck with me the most is that there was a fair amount of attention being paid to the Confederate battle flag being marched through the Capitol building. But what did not get enough attention is that there was also the Christian flag. Many people may not be familiar with it. That flag was being marched right into the House chamber along with the Confederate flag.

The insurrectionists are telling us who they are. They very deliberately chose those symbols. They wore them on their clothes. These were white supremacists. These were Christians. Those two groups were not fighting each other. They were marching side by side.

America has such a long history of being dominated by Christianity that many people are reluctant to really see the connections between white supremacy and Christianity as part of American culture.

But you are exactly right. The Ku Klux Klan targeted not just African Americans but also Jews and Catholics, because they considered the United States to be a white Anglo-Saxon Protestant country.

Weird things happen when you get desperate. Those white Americans are reaching for almost anything that will tell them that they are still the most important group in the country, that they still own the country, the country was created for their benefit. In many ways the bedrock of their worldview is crumbling.

White evangelical Protestants are at a very dangerous place in their history today. They have been accustomed to being in the majority, as part of the mainstream of American culture. They find themselves increasingly out of step with the country in terms of their beliefs and their attitudes. Their children and grandchildren are disaffiliating from white evangelical churches. It is a shrinking movement.

The danger then becomes that if part of your worldview depends on the belief that America is a Christian nation — and not just a Christian nation but really a Protestant nation — and moreover that your group are rightful inheritors of that country, and you add in leaders telling you that your country is being unfairly taken away from you, it all becomes a very dangerous powder keg. Such beliefs can lead to extraordinary responses. I believe that the extremes of this view are violent. We should take that very seriously.

Evangelicals constitute a clear and present danger in America and need to be viewed as such by law enforcement and they need to cease being afforded deference and special rights.

Posted by Michael-in-Norfolk at Wednesday, March 10, 2021