It's Time to End the Filibuster 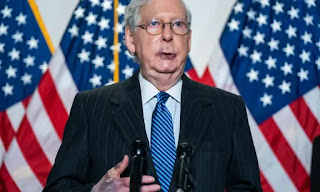 As the Biden Covid relief bill nears final passage - solely on the basis of Democrat votes - it is becoming obvious that congressional Republicans, especially the grim reaper of the Senate, Mitch McConnell (who has done immense harm to the nation), will do all they can to block passage of much needed legislation that has majority of public opinion support.  Why?  Two reasons, the first being they want Democrats to enter the 2022 mid-terms with little accomplished. The larger reason is that the GOP is terrified that Biden's big government programs will succeed and demonstrate to the American public that the GOP's opposition hurts average Americans and more government in their lives is a benefit, not a curse as stated by Ronald Reagan.  The main tool that Republicans will attempt to use is the outdated, Jim Crow era filibuster.  A piece in The Atlantic makes the case that the filibuster needs to be abolished so that a minority cannot exert tyranny over the majority.  Here are highlights:

Last week the House of Representatives passed H.R. 1, a bill that would make voter registration automatic, end partisan gerrymandering, strengthen campaign-finance law, and bolster oversight of lobbyists. It’s the most sweeping package of democracy reforms in generations. Yet the mood among most democracy reformers was not giddy excitement but resigned dismay: Although H.R. 1 has passed the House, it remains in the pile of campaign promises—a higher minimum wage, an assault-weapons ban, comprehensive immigration reform, the John Lewis Voting Rights Act, and more—that under current Senate rules need 60 votes or more to pass, an essentially insurmountable requirement in today’s deeply polarized, evenly split legislature.

It’s hardly surprising that a growing number of Democratic politicians now want to end the legislative filibuster entirely, or that Minority Leader Mitch McConnell and his fellow Republicans are rallying to its defense. What is surprising, however, is how few Americans know that we’ve eliminated it before: 130 years ago, after a debate that makes today’s seem placid by comparison, Republican lawmakers got rid of the filibuster—not in the Senate, but in the House of Representatives.

The procedural battle that took place more than a century ago holds an important lesson for lawmakers of both parties today: Ending the filibuster may be messy, but it won’t destroy a legislative body. In fact, in a polarized age, the only guaranteed cure for political dysfunction is majority rule.

Like the Senate filibuster, which was created when then–Vice President Aaron Burr accidentally removed a rule permitting a majority of the chamber to force a vote on a bill, the House filibuster was at heart a procedural loophole. . . . . Just as in the Senate presently, a minority of the House could kill a popular bill by denying it an up-or-down vote.

At the turn of the 20th century, partisan polarization was almost as bad as it is today, which meant that the assumption back then was the same as it is now: The minority party would use the filibuster to completely derail the majority’s legislative agenda.

What no one anticipated, however, was a legislator as devoted to getting rid of the filibuster as Speaker Thomas Brackett Reed. A 6-foot-3, 300-pound Civil War veteran who favored walrus mustaches and all-black attire, . . . . he became convinced that if a minority of lawmakers could kill a bill without allowing a vote on it, the House would become, in his words, “a tyranny.”

The filibuster’s defenders warned that the end of the filibuster would fundamentally change the House, and they were right. With partisan control of the chamber no longer threatened by obstruction, party leaders became far more influential. Speakers—not just Reed, but his successors as well—consolidated power at the expense of individual members.

The House also took a populist turn. When tabloid-fueled jingoism swept the country a few years later, America declared war on Spain. This likely would not have happened if anti-war lawmakers, Reed among them, had been able to deny their pro-war colleagues a quorum. It seems likely that eliminating the Senate filibuster today would have similar effects, consolidating power in the hands of the majority leader and making the chamber more susceptible to the fickleness of public opinion.

[I]t’s hard not to view the end of the House filibuster as anything but a success for democracy. The 51st Congress, expected to accomplish next to nothing, instead became one of the most productive in history. With full control of government, Republicans passed the Sherman Antitrust Act to rein in big business; established land-grant colleges for Black students in the South; expanded pensions for Civil War veterans and their families; laid the foundation for the National Parks Service; created the beginnings of the federal immigration system; granted statehood to the Dakotas, Montana, Washington, and Idaho; and much more.

[T]he existence of the House filibuster, once so crucial to the chamber, began its slide into obscurity. Today, the laws passed by the 51st Congress continue to shape American life. Yet the procedural debate that made those laws possible—and sent lawmakers running for the exits—is forgotten, even to many of the filibuster’s staunchest defenders today.

Perhaps this is the most important lesson a 130-year-old parliamentary battle holds for lawmakers in 2021: If we end the Senate filibuster, our descendants are unlikely to find themselves longing for its return. If anything, they’ll be surprised that such a bizarre and anti-democratic practice was allowed to hold back progress for so long.

Posted by Michael-in-Norfolk at Wednesday, March 10, 2021