Biden Is Rolling Back the Culture War 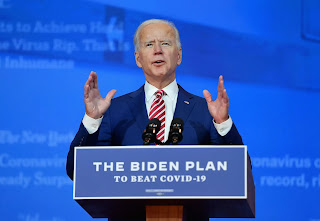 As noted in the prior post, Donald Trump sought to inflame the so-called culture war as part of his effort to maintain the loyalty of morally bankrupt evangelicals, Christofascists, and grifter scamvangelists always in a pursuit of power and, of course money.  State Republicans are seeking to employ the same tactic. Yet, so far the Biden administration's main focus has been on ending the Covid-19 pandemic, undertaking measures Trump could have implemented six months or more ago had his regime not been like a never ending version of a bad reality TV show. As part of this effort, he has relied on legitimate healthcare experts and he has sought to aid struggling Americans to whom the Republicans only offer racial division and religious intolerance as a distraction. Obviously, Biden cannot roll back the culture wars unilaterally, but by refusing to be distracted and ignoring insults flung by total hypocrites like Ted Cruz and Josh Hawley, both of whom have Ivy League resumes, who pretend to represent working Americans even as they throw them under the economic bus.  A column in the Washington Post looks at Biden's efforts.  Here are excerpts:

One of President Biden’s early achievements does not get enough attention: He is rolling back the politics of culture wars. This is good news for his electoral and governing projects, but also for our country.

This assertion will invite contradictory dissents. On the one side, culture wars were bound to abate during a pandemic and economic downturn. The other response is: Are you kidding? If culture wars are over, why is Dr. Seuss all over Fox News?

To take the second point first: Sure, cultural conflict will forever be part of American life. Our habits, mores and assumptions are always in flux, especially given the United States’ exceptional religious, racial and ethnic diversity — along with our long-running feuds between big cities and the countryside. . . . . But what matters is how politicized these conflicts become. Republicans and conservatives have used culture wars as a way of encouraging working-class voters to cast their ballots on the basis of social, religious and racial issues rather than on economic questions.

Ever since the 1960s, the GOP has chipped away at the New Deal coalition by insisting that when the word “elitist” is used, it is a reference to cultural trendsetters and professors, not corporate titans.

And when Texas Sen. Ted Cruz (R-Princeton, Harvard Law School) claimed that Republicans are now the party of “working class men and women” in an interview on Fox News, he spoke of how their wages were being “pulled down” because they were competing with “people coming illegally.” Thus did undocumented immigrants become the class enemy. . . . A member of the party that has done everything it could for the past four decades to destroy organized labor, Cruz even had the temerity to say that Democrats “don’t represent unions anymore.”

His words came a day after Biden offered one of the most pro-union speeches ever given by a president. . . . . Of particular note here is how Biden linked the inequalities of class and race. Here again, he’s fighting against wedge politics aimed at dividing middle- and working-class voters along racial and ethnic lines — and immigration status.

Now, you could argue that Biden’s relentless attention to the pandemic, and the work of economic relief and recovery, is simply common sense. And it is. . . . But the president and his team have exercised enormous discipline in keeping the national conversation focused on bread-and-butter assistance to the vast majority of Americans. It’s one reason his $1.9 trillion aid package that cleared the House and then passed the Senate on Saturday with only Democratic votes polls so well.

And whenever he could, Biden has tried to shift the conversation about the pandemic away from cultural conflict and toward the practical work of ending the scourge.

Former president Donald Trump, and now his allies, keep trying to turn mask-wearing into a cultural question linked to personal liberty. Biden calmly but pointedly speaks for the roughly three-quarters of the American public that sees mask-wearing not as some esoteric form of compulsory virtue signaling but as part of everyone’s responsibility to help prevent the spread of covid-19.

The right wing tried to make a new flash point out of Biden’s rebuke to “Neanderthal thinking” after Republican governors in Texas and Mississippi lifted mask-wearing requirements.

But it hasn’t stuck, and Biden cares more about getting people to wear masks than in pushing the fight further. In any event, most Americans know how deadly it was to politicize mask-wearing in the first place, and it’s excruciatingly hard to turn Biden (D-University of Delaware, Syracuse University College of Law) into an elitist peddler of cultural radicalism. . . . . a 78-year-old White guy is harder for the radical right to demonize than, say, Barack Obama, Hillary Clinton or Nancy Pelosi.

No wonder anti-Biden paraphernalia sold so poorly at the CPAC meeting, as The Post’s David Weigel reported. “I can’t give the Biden stuff away,” mourned merchandizer David Solomon.

As for Dr. Seuss, Republicans might yet help Biden turn that controversy into an economic question, too. After all, their resolute opposition to Biden’s proposal to help Americans in economic trouble makes them resemble no one so much as the Grinch . . . .