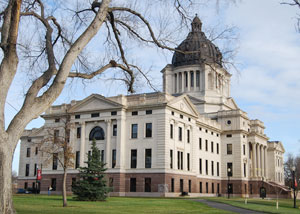 During its four years of misrule, the Trump/Pence regime waged a relentless war against LGBT Americans both to pander to the Christofascist base of the GOP and to further Pence's animus towards the LGBT community.  While Joe Biden is diligently working to undo the anti-LGBT handiwork of Trump/Pence, across the country in GOP controlled legislatures a host of bills have been introduced by legislators eager to prostitute themselves to the Christofascists to inflame the culture wars to distract members of the party base from the reality that the Republicans are doing nothing to aid economically working class American (the South Dakota capitol is shown at right).  Indeed, Congressional Republicans voted against the Covid relief bill that will benefit millions of working families.   A piece in The Advocate looks at the state level war on LGBT citizens.  Here are highlights:

As of this week there have been 71 specifically anti-trans bills introduced in state legislatures around the country, along with 37 bills that target the LGBTQ+ population overall, according to the Human Rights Campaign’s latest count.

Of the anti-trans proposals, 37 seek to restrict transgender athletes’ participation in school sports, with an emphasis on keeping trans girls and women from competing with cisgender females. Twenty-five are aimed at preventing trans minors from receiving gender-affirming procedures, even if the young people have the support of their families. There are nine other bills that would harm trans people in various ways.

Of the broader anti-LGBTQ+ bills, there are 21 so-called religious freedom bills that would enable discrimination against LGBTQ+ people, women, members of minority faiths, and more. Others seek to protect conversion therapy, limit sex education, or otherwise infringe on LGBTQ+ rights.

Most of the bills have been introduced in the South, the Great Plains, or the Mountain West, although there are a few pending in usually progressive states such as Minnesota, New Hampshire, and New Jersey. The two that are closest to becoming law are an anti-trans sports bill in Mississippi and a religious refusals bill in South Dakota.

As for the assertion that these bills are driven by a concern about women’s rights — those of cisgender women, anyway — the right-wing lawmakers behind them have generally shown little concern about funding for women’s sports, equal treatment in the workplace, or reproductive freedom (regarding the latter issue, they have sought to take away access to contraception and abortion). Anti-trans sports legislation is widely opposed by women’s and children’s rights groups.

Opponents of the anti-trans measures say there’s a coordinated effort by anti-LGBTQ+ groups such as the Alliance Defending Freedom. The organization wrote Montana’s so-called Save Women’s Sports Act, and some other pieces of legislation have been modeled on it, LGBTQ+ activists say.

In targeting trans youth, far-right politicians and organizations are taking aim at the most vulnerable members of the LGBTQ+ community, and they may have been emboldened by the attacks that have come from Donald Trump and his ilk . . .

South Dakota is the only state where both chambers have passed a religious refusals bill, and it’s up to Gov. Kristi Noem, a rising Republican star, whether to sign it. The bill was introduced because of restrictions on religious services during the COVID-19 pandemic and sought to assure that religious and secular institutions were treated equally, Janna Farley, communications director for the American Civil Liberties Union of South Dakota, said on Thursday’s conference call.

Her organization had no problem with that intent, but the bill was written so broadly as to open the door to the use of religion for discrimination against LGBTQ+ and two-spirit people, members of minority faiths, and others, Farley said. She mentioned a landlord in Minnesota who cited his religious beliefs in refusing to rent to an unmarried couple, and a police officer in Oklahoma who wouldn’t work at a Muslim event. The ACLU and others asked lawmakers to amend the bill to address these potential harms, but their concerns were ignored, she said.

The legislation is similar to a Religious Freedom Restoration Act adopted in 2015 in Indiana, when Mike Pence was governor. It was amended after much public outrage. David and others predicted a similar outcry if the South Dakota bill becomes law.

“South Dakota potentially risks the loss of business opportunities and the revenue that comes with it, significant legal fees, and damage to the state’s reputation,” David said in a statement this week. “We strongly urge Governor Kristi Noem to reject this dangerous and controversial legislation that would invite a world of problems for South Dakota amidst already difficult circumstances for the state and this country.”