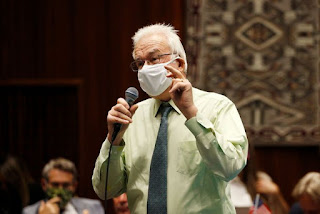 Having lost the 2020 presidential election and then two Senate races in Georgia, Republicans across the country are introducing bills to make voting much more difficult, especially for minorities and younger voters who they view as likely to vote Democrat.  This aversion to democracy is nothing new, although after years of being less blatant about the GOP's hostility to voting rights, the hostility towards minority voters is in full view.  Simply put, the GOP only wants certain people to be able to vote: whites only, if possible.  A piece in New York Magazine looks at the candor of some Republicans (see the image of Representative John Kavanagh above) in wanting to limit voting by "those people" so as to tilt election results toward the GOP which increasingly cannot win elections based on the party platform and policies that benefit the wealthy while throwing scraps to poor whites duped into voting against their own economic interests by GOP calls to racism and right wing Christian religious extremism.  The piece also lays out with clarity the fact that conservatives/Republicans have never been fans of democracy.  Here are article excerpts:

Representative John Kavanagh, a Republican legislator who chairs Arizona’s Government and Elections Committee and is shepherding through a bill to make voting more cumbersome and therefore rare, described his party’s motives with blundering candor.

“There’s a fundamental difference between Democrats and Republicans,” he told CNN. “Democrats value as many people as possible voting, and they’re willing to risk fraud. Republicans are more concerned about fraud, so we don’t mind putting security measures in that won’t let everybody vote — but everybody shouldn’t be voting … Not everybody wants to vote, and if somebody is uninterested in voting, that probably means that they’re totally uninformed on the issues. Quantity is important, but we have to look at the quality of votes, as well.”

If I had to guess, his argument is something he’s picked up from reading conservative media, and he never realized his role as elected official makes it unwise to repeat — especially on-camera.

Donald Trump’s presidency, with its continuous demands to silence his opposition and efforts to undermine the election, highlighted his party’s anti-democratic character. But hostility to democracy is a long tradition on the right, including (perhaps especially) in its loftiest highbrow quarters.

Respectable conservative organs like National Review not only supported segregation and opposed civil rights, but also opposed laws to safeguard voting rights. The NR formula on voting rights has always combined several classic elements. First, there are usually some arch, snobbish gibes at right-wing populist demagogues, who are crass and beneath the dignity of the deserving elites at National Review. Second, the dismissal of rank bigotry is set against a “frank” concession that most Black people do not actually deserve the franchise because they are, like the poor whites who support the demagogues, too ignorant to exercise their vote wisely. And third, it declares states’ rights to be the paramount consideration, so that ultimately no federal solution can be imposed, however troubling the abuses of the state-level authorities.

In 1965, James J. Kilpatrick’s National Review cover story dismissed the need for a Voting Rights Act. Yes, Kilpatrick conceded, white Southerns had mistreated Black people. (“No reasonable man would deny that in times past, the South has sinned against the Negro; here and there, in times present, the abuse continues.”) However, the fact remained, “Over most of this century, the great bulk of Southern Negroes have been genuinely unqualified for the franchise.

A 1966 column by Buckley began with some mockery of Alabama governor George Wallace. But Buckley proceeded to his main point. “For some reason it has been hailed as a triumph of democratic justice that so many Negroes succeeding in voting last week,” he sneered, mocking the absurdity of illiterate Black Alabamans being permitted to vote. Weighing the competing absurdities of the two “evils” — Wallace’s buffoonery, or Black people voting despite having been denied an education by their state — he concluded “the latter” was worse.

After the 1960s, most mainstream conservatives abandoned their defense of de jure segregation in the South, and two decades later had to abandon their defense of the same system in South Africa. But the idea that voting rights ought to be restricted remains a staple of conservative thought to this day. The chilly reception National Review and other right-wing elites afforded Trump was in keeping with their traditional contempt for demagoguery. But the danger they identified in him was not that he threatened democracy, but seemed in their mind to embody it. “We must weed out ignorant Americans from the electorate,” insisted David Harsanyi in 2016.

Conservatives are hysterical in opposition to proposals in Congress to guarantee voting access and limit gerrymandering. National Review calls H.R. 1, the main House bill to promote election reform, “a partisan assault on American democracy.” But NR should be more honest in its criticism: Democracy is not what it wants at all, and never has been.