A Second Blue Wave in the Suburbs? 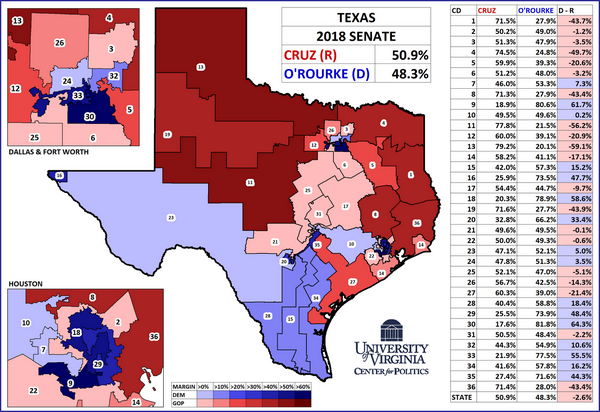 An exodus of suburban voters from the GOP fueled Democrat wins in 2018 and handed control of the U.S. House of Representatives to Democrats.  As things currently stand, Trump is even more disliked than in 2018 and his botched handling of the Covid-19 pandemic and the battered economy may underscore that dislike.  A piece in Larry Sabato's Crystal Ball looks at possible problems for the congressional Republicans in suburban districts if Trump loses or barely edges out wins far smaller than in 2016.  In deed, Trump may have negative coattails even in states like Texas where the rural/suburban divide is growing rapidly.  In heavy military areas like Hampton Roads, Virginia, the Russian bounties for dead Americans and Trump's claim it is all a hoax could harm Trump and those in the GOP pandering to him even further.  Here are article highlights:

Well-educated suburban districts, particularly ones that also were diverse, were a major part of the Democrats’ victory in the House in 2018. Democrats captured many formerly Republican districts where Donald Trump performed significantly worse in 2016 than Mitt Romney had in 2012. Democratic victories in and around places like Northern Virginia, Philadelphia, Pittsburgh, Detroit, the Twin Cities, Atlanta, Orange County, CA, parts of New Jersey, and elsewhere came in seats that meet this broad definition.

And then there’s Texas. Democrats picked up two districts there, one in the Dallas/Ft. Worth Metroplex (TX-32) and another in suburban Houston (TX-7). But Democrats put scares into several other Republican incumbents, and the closeness of presidential polling in Texas could lead to unexpected opportunities for Democrats there this November.

Tellingly, of 18 Texas polls in the RealClearPolitics database matching Biden against Trump dating back to early last year, Trump has never led by more than seven points — in a state he won by nine in 2016. It seems reasonable to assume that Trump is going to do worse in Texas than four years ago, particularly if his currently gloomy numbers in national surveys and state-level polls elsewhere do not improve.

In an average of the most recent polls, Trump leads by two points in Texas. In 2018, Sen. Ted Cruz (R-TX) won reelection over then-Rep. Beto O’Rourke (D, TX-16) by 2.6 points. If Trump were to win Texas by a similar margin this November, the congressional district-level results probably would look a lot like the Cruz-O’Rourke race.

Cruz won the remaining districts, but several of them were close: TX-2, TX-3, TX-6, TX-21, TX-22, TX-25, and TX-31 all voted for Cruz by margins ranging from 0.1 points (TX-21) to 5.1 (TX-25). These districts all have at least average and often significantly higher-than-average levels of four-year college attainment, and they all are racially diverse.

In other words, these districts share some characteristics of those that have moved toward the Democrats recently, even though they remain right of center.

This is all a long preamble to an alarming possibility for Republicans: If Biden were to actually carry Texas, he might carry many or even all of these districts in the process. In a time when ticket-splitting is less common than in previous eras of American politics (though hardly extinct), that could exert some real pressure on Republicans in these districts.

Trump’s Texas sag in 2016 didn’t immediately imperil any Texas Republican U.S. House members, except for retiring Rep. Will Hurd (R) in the perpetually swingy TX-23; it took the 2018 midterm, when Trump’s unpopularity led to big House losses for Republicans, to make many of these districts much more competitive. So it’s possible that Biden could do really well, but not have strong-enough coattails in these and other similar kinds of districts. We also still like Trump’s chances in Texas, despite the close polls.

However, if that changes — and if Biden wins the state without much ticket-splitting — there could be some unpleasant surprises down the ballot for Republicans in Texas. That could also include control of the Texas state House of Representatives, which might be in play if things get bad enough for Republicans this November.

Redistricting looms for 2021 — at the very least, Republicans who currently control state government in Texas may have to dramatically re-draw the map to shore up incumbents whose safe seats have eroded over the course of the decade while also accommodating a few new House seats because of Texas’ explosive growth. For Republicans, their gerrymander after the last census (albeit blunted a little by judicial intervention) made practical political sense, but demographic changes and coalition shifts pushed 20 of the 36 districts to vote more Democratic than the state in the 2018 Senate race. And if Democrats somehow win the state House, they will have a formal seat at the table in the redistricting process next year.

That said, as we scan the Leans Republican and Leans Democratic columns, there may be more GOP seats than Democratic ones that are closer to drifting into the Toss-up column. Second-quarter fundraising reports, which will be trickling out over the next couple of weeks, may provide some additional clues as to the state of these competitive races.

All in all, the Democrats’ grip on the House majority remains strong.

Meh.
The suburbs are usually pretty racist and mostly white, so I’ll wait until I’m optimistic. Cheeto is gonna count on voter suppression and Vlad’s help to win. Oh and on the stupidity of Americans and their unbridled racism.