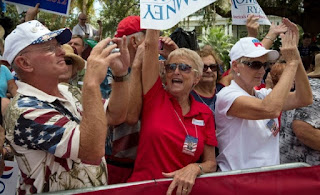 With the Covid-19 pandemic worsening in the USA - hence why Americans are banned from traveling to European nations - one wants to find something positive in the news.  The above headline caught my eye since Donald Trump and America's horrifically botched response to the pandemic are irreversibly linked to one another.  Between lies and denials and the total failure of any coordinated federal response Trump made a terrible situation far, far worse as did his boot-licking supporters in the Republican Party such as the governors of Florida and Texas who rushed to reopen their states' businesses over the advice of medical experts in the hope of reviving the economy and Trump's chances of reelection.  Both states now face a crisis thanks to such failed leadership. The irony is that the GOP's most staunch suppers - older white voters - are among those most at risk from the pandemic.  Thankfully, many of this demographic have been paying attention and belatedly realized that neither Trump nor the GOP are their friends. Indeed, fear of death from the virus has - no pun intended - trumped the groups' all too prevalent racism and religious extremism.  The welcome result is that Trump is seeing his support hemorrhaging within this demographic.  A piece in the New York Times looks ate the situation.  What I find remarkable is that none of these voters should have been surprised by Trump's failure of leadership or moral bankruptcy when they pulled the lever for him in 2016.  As for those still supporting Trump, I suspect that if they were honest with themselves and others, it's racism and/or Christofascist leanings that are keeping them loyal to Trump.  This election is truly a choice between morality and immorality. Here are excerpts:

He supported Jeb Bush in the 2016 presidential primary race and cast a protest vote in the general election for Gary Johnson, the Libertarian nominee. An Air Force veteran, Mr. Wagner described the Trump presidency as a mortifying experience: His friends in Europe and Japan tell him the United States has become “the laughingstock of the world.”

This year, Mr. Wagner said he would register his opposition to Mr. Trump more emphatically than he did in 2016. He plans to vote for Joseph R. Biden Jr., the presumptive Democratic nominee, and hopes the election is a ruinous one for the Republican Party.

Mr. Wagner is part of one of the most important maverick voting groups in the 2020 general election: conservative-leaning seniors who have soured on the Republican Party over the past four years.

Republican presidential candidates typically carry older voters by solid margins . . . . Today, Mr. Trump and Mr. Biden are tied among seniors, according to a poll of registered voters conducted by The New York Times and Siena College. And in the six most important battleground states, Mr. Biden has established a clear upper hand, leading Mr. Trump by six percentage points among the oldest voters and nearly matching the president’s support among whites in that age group.

Mr. Trump’s presidency has been a trying experience for many of these voters, some of whom are now so frustrated and disillusioned that they are preparing to take the drastic step of supporting a Democrat.

The grievances of these defecting seniors are familiar, most or all of them shared by their younger peers. But these voters often express themselves with a particularly sharp kind of dismay and disappointment. They see Mr. Trump as coarse and disrespectful, divisive to his core and failing persistently to comport himself with the dignity of the other presidents that they have observed for more than half a century. The Times poll also found that most seniors disapproved of Mr. Trump’s handling of race relations and of the protests after the death of George Floyd.

And as the coronavirus pandemic continues to sweep the country, putting older Americans at particular risk, these voters feel a special kind of frustration and betrayal with Mr. Trump’s ineffective leadership and often-blasé public comments about the crisis.

In The Times poll, seniors in the battleground states disapproved of Mr. Trump’s handling of the coronavirus pandemic by seven points, 52 percent to 45 percent. By a 26-point margin, this group said the federal government should prioritize containing the pandemic over reopening the economy.

Former Representative Carlos Curbelo of Florida, a 40-year-old Republican deeply versed in the politics of the retiree-rich swing state, said many seniors were disturbed by important aspects of Mr. Trump’s record and found Mr. Biden a mild and respectable alternative who did not inspire the same antipathy on the right that Mrs. Clinton did in 2016.

Mr. Trump’s ineffective response to the coronavirus weighed on the thinking of many older voters surveyed in the poll, including Patrick Mallon, 73, a retired information technology specialist in Battle Creek, Mich.

The pandemic set Mr. Mallon firmly against Mr. Trump’s re-election. “The main reason is Donald Trump saying, ‘Don’t wear a mask, this thing is going to go away, we can have large gatherings,’” he said. “Everything he says is incorrect and dangerous to the country.”

Nonwhite seniors in the battleground states currently support Mr. Biden over Mr. Trump by a huge margin, 65 percent to 25 percent. Even among some seniors supportive of Mr. Trump, however, there is an undercurrent of unease about the way he approaches the presidency.

At the moment, Mr. Trump’s unpopularity with older voters appears to be hindering other Republicans in states including Arizona and Michigan.

Gayle Craven, 80, of High Point, N.C., said that while she was a registered Republican, she had not voted for Mr. Trump in 2016 and would reject him again this year. She said she saw Mr. Biden as an “honest man.”

Again, no one should be surprised by Trump's failures in leadership or his grotesque immorality. It was all on open display prior to the 2016 election.  The Access Hollywood tape made Trump's immorality all to visible to anyone who wasn't a racist first and foremost.
Posted by Michael-in-Norfolk at Sunday, June 28, 2020