The Decline of the American World 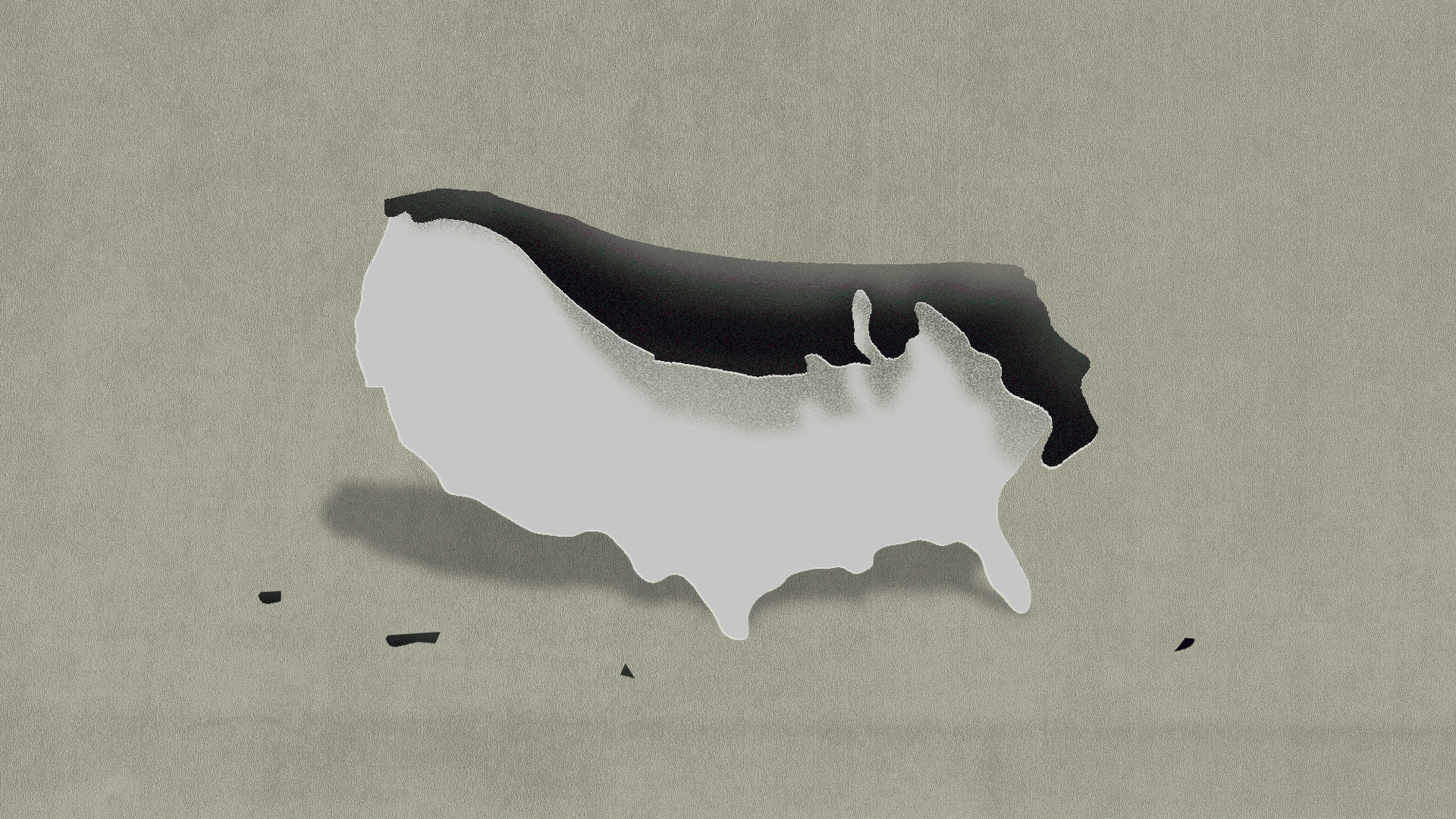 If one surveys the so-called great powers over the course of history, all eventually fade and give way to successor powers - e.g, the Persian Empire, the Roman Empire, the Byzantine Empire, Spain. France, the British Empire,  Some have fallen due to military might of other nations, yet most have also declined due to internal problems and a failure/refusal to address the problems.  Of course, there is also the issue of failed leadership that has served to exacerbate internal and external threats and problems. A very long piece The Atlantic looks at America as it seemingly finds itself a such a cross roads with a totally unfit occupant in the White House who serves only to worsen external and internal threats. Compounding the situation is America's long history of refusing to be honest about its history and its moral failings that are all too often swept under the myth of American exceptionalism.  Another four more years of Trump in the White House would only serve to further accelerate America;s decline.  Already, the damage done has been incalculable.  Here are article highlights:

“He hated America very deeply,” John le Carré wrote of his fictional Soviet mole, Bill Haydon, in Tinker Tailor Soldier Spy. Haydon had just been unmasked as a double agent at the heart of Britain’s secret service, one whose treachery was motivated by animus, not so much to England but to America. “It’s an aesthetic judgment as much as anything,” Haydon explained, before hastily adding: “Partly a moral one, of course.”

I thought of this as I watched the scenes of protest and violence over the killing of George Floyd spread across the United States and then here in Europe and beyond. . . . . The beauty of America seemed to have gone, the optimism and charm and easy informality that entrances so many of us from abroad.

At one level, the ugliness of the moment seems a trite observation to make. And yet it gets to the core of the complicated relationship the rest of the world has with America.

Le Carré’s reflection on the motivations of anti-Americanism—bound up, as they are, with his own ambivalent feelings about the United States—are as relevant today as they were in 1974, when the novel was first published. Where there was then Richard Nixon, there is now Donald Trump, a caricature of what the Haydons of this world already despise: brash, grasping, rich, and in charge. In the president and first lady, the burning cities and race divides, the police brutality and poverty, an image of America is beamed out, confirming the prejudices that much of the world already have—while also serving as a useful device to obscure its own injustices, hypocrisies, racism, and ugliness.

It is hard to escape the feeling that this is a uniquely humiliating moment for America. As citizens of the world the United States created, we are accustomed to listening to those who loathe America, admire America, and fear America (sometimes all at the same time). But feeling pity for America? That one is new, even if the schadenfreude is painfully myopic. If it’s the aesthetic that matters, the U.S. today simply doesn’t look like the country that the rest of us should aspire to, envy, or replicate.

Even in previous moments of American vulnerability, Washington reigned supreme. Whatever moral or strategic challenge it faced, there was a sense that its political vibrancy matched its economic and military might, that its system and democratic culture were so deeply rooted that it could always regenerate itself. It was as if the very idea of America mattered . . . Now, something appears to be changing. America seems mired, its very ability to rebound in question. A new power has emerged on the world stage to challenge American supremacy—China—with a weapon the Soviet Union never possessed: mutually assured economic destruction.

For the United States, this cultural dominance is both an enormous strength and a subtle weakness. It draws in talented outsiders to study, build businesses, and rejuvenate itself, molding and dragging the world with it as it does, influencing and distorting those unable to escape its pull. Yet this dominance comes with a cost: The world can see into America, but America cannot look back. And today, the ugliness that is on display is amplified, not calmed, by the American president.

America’s closest allies are looking on with a kind of stunned incomprehension, unsure of what will happen, what it means, and what they should do, largely bound together with angst and a shared sense, as one influential adviser told me, that America and the West are approaching something of a fin de siècle.

[T]he confluence of recent events and modern forces has made the present challenge particularly dangerous. The street protests, violence, and racism of the past few weeks have erupted at the very moment the country’s institutional failings have been exposed by the COVID-19 pandemic, reinforced by its apparently unbridgeable partisan divide, which is now even infecting parts of the American machine that have so far been untouched: its federal agencies, diplomatic service, and the long-standing norms underpinning the relationship between civilians and the military. All of this is happening in the final year of the first term of the most chaotic, loathed, and disrespected president in modern American history.

Most of those I spoke to were, however, clear that Trump’s leadership has brought these currents—in tandem with the pressure of relative economic decline, the rise of China, the reemergence of great-power politics, and the decline of the West as a spiritual union—to a head in a manner and speed previously unimaginable.

[T]he nadir of American prestige has, until now, been the revelations of torture and abuse inside the Abu Ghraib prison near Baghdad in 2004. “Today, it is much worse,” he said. What makes things different now, according to Duclos, is the extent of division within the United States and the lack of leadership in the White House. “We live with the idea that the U.S. has an ability to rebound that is almost unlimited,” Duclos said. “For the first time, I’m starting to have some doubts.”

Put bluntly, Trump is unique. At the most basic level, Bush never recoiled from the core idea that there was a Western song, and that the lyrics should be composed in Washington. Trump today hears no unifying music—only the dull beat of self-interest.

One senior adviser to a European leader, who did not want to be named relating private deliberations, told me that Continental snobbery at the notion of American leadership of the free world, of the “American Dream” and other clichés dismissed until now as hopelessly naive, has suddenly been exposed by Trump’s cynicism.

Those that I spoke to divided their concerns, implicitly or explicitly, into those caused by Trump and those exacerbated by him—between the specific problems of his presidency that, in their view, can be rectified, and those that are structural and much more difficult to solve. Almost everyone I spoke to agreed that the Trump presidency has been a watershed not just for the U.S. but for the world itself: It is something that cannot be undone. Words once said cannot be unsaid; images that are seen are unable to be unseen.

The immediate concern for many of those I interviewed was the apparent hollowing out of American capacity. Lawrence Freedman, a professor of war studies at King’s College London, told me the institutions of American power themselves have been “battered.” The health system is struggling, the municipalities are financially broke, and, beyond the police and the military, little attention is being paid to the health of the state itself. Worst of all, he said, “they don’t know how to fix it.”

A European ambassador told me Trump himself is an expression of American decline. “Choosing Trump is a way of not very successfully adapting to the globalized world,” the diplomat, who asked for anonymity, said. It is a sign of the United States following other great powers downward, . . . . “The Netherlands were the dominant global power in the 18th century. Today they are a successful country, but they have simply lost their power. To some extent the U.K. and France are on the journey to become the Netherlands, and the U.S. is on the journey to be Britain and France.” . . . “The collapse of the American Empire is a given; we are just trying to figure out what will replace it.”

America’s problem is that the rest of the world can see when it has fallen below its achievements. In moments such as the current one, it is hard to dispute some of the criticisms leveled by the country’s most vociferous critics from abroad: that it is irredeemably racist or overly ambivalent to poverty and violence, police brutality and guns. The rights and wrongs don’t appear particularly complicated in this dilemma, even if the country itself is.