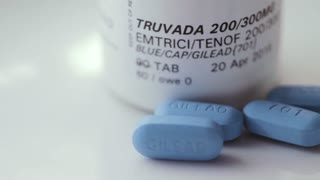 As the prior post noted, America continues to have one of the most flawed and expensive health care systems of any developed nation.  Much preventative treatment is not covered and our prescription drug prices are obscenely high compared to drug prices in other developed nations.   Why? Largely, because large pharmaceutical companies have bought and paid for members of Congress, especially Republicans.  The other reason is that programs like Medicaid and Medicare continue to fail to negotiate lower prices, in part because of politicians in the pockets of the pharmaceutical companies.  Imagine if there was a drug that could have a 99% track record of preventing disease but was so expensive - at least in America - that only a tiny percentage of those who would benefit can afford it even if they have "good insurance."  Due to the lack of affordability, many become ill and huge medical costs are incurred - costs that could have been avoided.  The drug exists: Truvada which taken daily and known as PrEP prevents HIV infection.  It cost about $55 to produce a year's supply, yet in America, the cost to patients is $20,000 per year.  I have focused on PrEP, but the same phenomenon applies to countless drugs that drive up medical costs into the stratosphere.  A piece in the New York Times looks at the USA experience versus other developed nations.  Here are highlights:

Last week, the High Court of England and Wales announced a momentous decision: It invalidated the pharmaceutical company Gilead’s patent on Truvada, opening the way to generic competition.

Truvada, a combination of two drugs, is one of the world’s most-used H.I.V. medicines. For treating H.I.V., it’s used along with a third drug. But many H.I.V.-negative people also take Truvada daily as a preventive. That’s called pre-exposure prophylaxis, or PrEP.
In the United States, Truvada is available only as a brand-name drug. It costs $20,000 a year.

Here’s how it will work in Britain’s National Health Service, according to Dr. Andrew Hill, a senior research fellow at Liverpool University who studies the cost of medicines. “The N.H.S. will say to a group of generic companies: ‘We need PrEP for 20,000 people. Give us your best price.’” The cost of making PrEP is $55 per year, Dr. Hill said. He believes that the generic will sell for between $100 and $200.

All over the world, more and more people are taking H.I.V. drugs. These medicines are very good at their job — keeping people healthy and noncontagious — so most patients will take them until they die of something that isn’t H.I.V. Patients are also starting earlier on antiretroviral therapy; the new recommendation is to start immediately upon diagnosis. And now with PrEP, a potentially enormous new group of patients has arisen: H.I.V.-negative people who are at risk for catching the virus.

It’s lucky, then, that Truvada will have generic competition. It should allow the health service to greatly lower costs and offer PrEP to anyone who needs it.

The health service does an admirable job with H.I.V. Around the world, countries measure the percentage of people living with H.I.V. who have no virus detectable in their blood. In the United States, only 49 percent have achieved this. In Britain, the number is 78 percent.

While the National Health Service has a lot of problems, it has some huge advantages over the American system that allow it to provide high-quality H.I.V. care in a cost-efficient manner. So it’s worth looking at what the British health service does right, because some of those strategies could work in America, even though the two systems are structured very differently.

Even when brand-name drugs have no generic equivalents, the medicines in the British system cost a small fraction of what they cost in America. Most brand-name triple therapies cost about $6,500, said Dr. Laura Waters, an H.I.V. physician who is a member of the health service’s H.I.V. Clinical Reference Group, which sets policy. She said that a combination pill that includes some generics would cost between $2,600 and $4,000. Full generics usually cost 70 to 80 percent less than comparable brand names. One completely generic H.I.V. regimen costs $400 per year.If America were to use more generics, much of the savings would stay with insurance companies and pharmacy benefit managers. That doesn’t help people with H.I.V. “The resources saved can and should finance a more aggressive effort to fight AIDS in America,” said Anil Soni, head of global infectious diseases for Mylan.

Could it happen with Medicare or Medicaid? Just a few states — New York, Georgia, Florida, California and Maryland — are responsible for a large share of Medicaid’s spending on H.I.V. drugs. They could lead a drive toward using more generic drugs. These drugs are already available, but doctors don’t prescribe them. Like the National Health Service, Medicaid would have to find ways to encourage (or cajole, entice or force) doctors to prescribe generics. If the generics were more widely used, that would encourage competition that could further drop the price.

Every day, America pays for H.I.V. drugs at higher and higher prices, for more and more people. There is no choice but to reform an unsustainable system.

“I just don’t understand why American payers don’t look up reference prices,” Dr. Hill said. “It’s $150 in England, so why are they spending $10,000? Surely they don’t have unlimited budgets in the U.S. But they behave as if they do.”

Posted by Michael-in-Norfolk at Friday, September 28, 2018

Truvada should be made readily available to all. This drug should have its generic counterpart created as soon as the trademark hits its deadline. With the health care system facing big problems, drug companies are poised to make even more money. Ugh.