Kavanaugh’s College Classmates Out Him as "Sloppy Drunk" 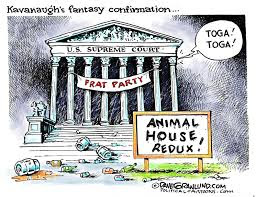 Many of us know the type either from high school, college or the working world: the guy who drinks far too much and then with no inhibitions shows his true self and does unacceptable things. I even had one law partner years ago who was basically a functioning alcoholic who lost his facade of civility after a few too many drinks.  On out of town trips, as the lowly associate, I'd drive rather than have him drive drunk and on legal cases, I and others would keep him focused and often write scholarly articles he claimed as his own without so much as a footnote mentioning the true authors/assistants. As a piece in New York Magazine notes, many of Brett Kavanaugh's classmates recall him as a stumbling drunk.  Do we want someone like this on the U.S. Supreme Court regardless of whether the sexual assault allegations are true?  The image and the legitimacy of the Court should count more than Kavanaugh's sense of entitlement to a position on the court.  Here are article highlights:

The two accusations of sexual misconduct facing Supreme Court nominee Judge Brett Kavanaugh have one big thing in common—alcohol. Christine Blasey Ford says a drunken Kavanaugh attempted to her rape her in high school and Deborah Ramirez says she was drunk when Kavanaugh thrust his bare penis in her face at a college party.

Kavanaugh denies both allegations. He also denies ever drinking to the point of blacking out. In an interview Monday with Fox News, Martha MacCallum asked if there was “ever a time that you drank so much that you couldn’t remember what happened the night before?”

“No, that never happened,” said Kavanaugh, who insisted his focus in school was on academics, athletics, church, and “service projects.”

But that squeaky clean image does not comport with the memories of some of Kavanaugh’s college classmates. Now they’re coming forward to dispute his attempt to make himself out of be a “choir boy.”

“Brett was a sloppy drunk, and I know because I drank with him. I watched him drink more than a lot of people. He’d end up slurring his words, stumbling,” Liz Swisher, a college friend of Kavanaugh’s, told the Washington Post. “There’s no medical way I can say that he was blacked out. . . . But it’s not credible for him to say that he has had no memory lapses in the nights that he drank to excess.”

The New York Times spoke to “nearly a dozen people who knew him well or socialized with him” and they all said Kavanaugh was a heavy drinker at Yale.

These stories largely match with the image of Kavanaugh that his college roommate, James Roche, put forward in a statement Monday. Roche said Kavanaugh was a “notably heavy drinker” and he recalled his one-time roommate “frequently drinking excessively and becoming incoherently drunk.”

Not every ex-classmate tracked down to talk about Kavanaugh remembered him as a complete sponge. Former NBA center Chris Dudley, a close friend of Kavanaugh’s at Yale, told the Post: “I went out with him all the time. He never blacked out. Never even close to blacked out.” Turns out, the former Knick might not be the most reliable source about his college years though. In 2010, while running for governor of Oregon as a Republican, he told a local paper that, despite records showing he registered as a Democrat after his freshman year of college, he had no recollection of ever belonging to the party.

Posted by Michael-in-Norfolk at Wednesday, September 26, 2018