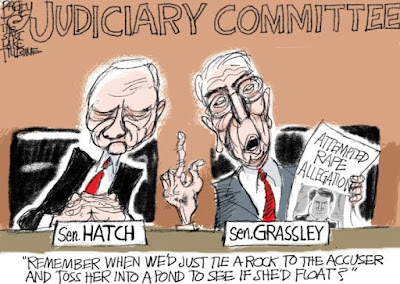 In response to my question of whether Brett Kavanaugh is unbelievably arrogant or stupid if he knew allegations of sexual misconduct might arise yet nonetheless accepted Trump's nomination, one reader may have hit the nail on the head when replying: He thought his elite prep school connections would shield him from scrutiny.  Whatever the case, The New Yorker first broke the story last evening that a second women has come forward to allege sexual misconduct by Kavanaugh, this time while he was in college and seemingly continuing the pattern of drunken misbehavior and contempt for women who it would appear he sees as sex objects to be used by men.  True to form, Kavanaugh says the event never happened and apparently wants the nation to believe that these women are motivated by purely political  agendas, something that to me sounds unbelievable.  The Trump White House, headed by a serial molester who views women as existing for his gratification, is joining the refrain that it's all a smear campaign.  Here re highlights from the piece in New Yorker:

As Senate Republicans press for a swift vote to confirm Brett Kavanaugh, President Trump’s nominee to the Supreme Court, Senate Democrats are investigating a new allegation of sexual misconduct against Kavanaugh. The claim dates to the 1983-84 academic school year, when Kavanaugh was a freshman at Yale University.

Senior Republican staffers also learned of the allegation last week and, in conversations with The New Yorker, expressed concern about its potential impact on Kavanaugh’s nomination. Soon after, Senate Republicans issued renewed calls to accelerate the timing of a committee vote. The Democratic Senate offices reviewing the allegations believe that they merit further investigation. “This is another serious, credible, and disturbing allegation against Brett Kavanaugh. It should be fully investigated,” Senator Mazie Hirono, of Hawaii, said. An aide in one of the other Senate offices added, “These allegations seem credible, and we’re taking them very seriously. If established, they’re clearly disqualifying.”

The woman at the center of the story, Deborah Ramirez, who is fifty-three, attended Yale with Kavanaugh, where she studied sociology and psychology. Later, she spent years working for an organization that supports victims of domestic violence.

For Ramirez, the sudden attention has been unwelcome, and prompted difficult choices. She was at first hesitant to speak publicly, partly because her memories contained gaps because she had been drinking at the time of the alleged incident.

Ramirez said that she felt confident enough of her recollections to say that she remembers Kavanaugh had exposed himself at a drunken dormitory party, thrust his penis in her face, and caused her to touch it without her consent as she pushed him away. Ramirez is now calling for the F.B.I. to investigate Kavanaugh’s role in the incident. “I would think an F.B.I. investigation would be warranted,” she said.

The White House spokesperson Kerri Kupec said the Administration stood by Kavanaugh. “This 35-year-old, uncorroborated claim is the latest in a coordinated smear campaign by the Democrats designed to tear down a good man.

Ramirez, who was raised a devout Catholic, in Connecticut, said that she was shaken. “I wasn’t going to touch a penis until I was married,” she said. “I was embarrassed and ashamed and humiliated.” She remembers Kavanaugh standing to her right and laughing, pulling up his pants. “Brett was laughing,” she said. “I can still see his face, and his hips coming forward, like when you pull up your pants.” She recalled another male student shouting about the incident. “Somebody yelled down the hall, ‘Brett Kavanaugh just put his penis in Debbie’s face,’ ” she said. “It was his full name. I don’t think it was just ‘Brett.’ And I remember hearing and being mortified that this was out there.”

[A]fter several days of considering the matter carefully, she said, “I’m confident about the pants coming up, and I’m confident about Brett being there.” Ramirez said that what has stayed with her most forcefully is the memory of laughter at her expense from Kavanaugh and the other students. “It was kind of a joke,” she recalled. “And now it’s clear to me it wasn’t a joke.”

A classmate of Ramirez’s, who declined to be identified because of the partisan battle over Kavanaugh’s nomination, said that another student told him about the incident either on the night of the party or in the next day or two. The classmate said that he is “one-hundred-per-cent sure” that he was told at the time that Kavanaugh was the student who exposed himself to Ramirez. He independently recalled many of the same details offered by Ramirez, including that a male student had encouraged Kavanaugh as he exposed himself.

The story stayed with him, he said, because it was disturbing and seemed outside the bounds of typically acceptable behavior, even during heavy drinking at parties on campus. The classmate said that he had been shocked, but not necessarily surprised, because the social group to which Kavanaugh belonged often drank to excess. He recalled Kavanaugh as “relatively shy” until he drank, at which point he said that Kavanaugh could become “aggressive and even belligerent.”

Another classmate, Richard Oh, an emergency-room doctor in California, recalled overhearing, soon after the party, a female student tearfully recounting to another student an incident at a party involving a gag with a fake penis, followed by a male student exposing himself.

Mark Krasberg, an assistant professor of neurosurgery at the University of New Mexico who was also a member of Kavanaugh and Ramirez’s class at Yale, said Kavanaugh’s college behavior had become a topic of discussion among former Yale students soon after Kavanaugh’s nomination. In one e-mail that Krasberg received in September, the classmate who recalled hearing about the incident with Ramirez alluded to the allegation and wrote that it “would qualify as a sexual assault,” he speculated, “if it’s true.”

Several other classmates said that they believed Ramirez to be credible and honest, and vouched for her integrity. James Roche was roommates with Kavanaugh at the time of the alleged incident and is now the C.E.O. of a software company in San Francisco. “Debbie and I became close friends shortly after we both arrived at Yale,” he said. “She stood out as being exceptionally honest and gentle. I cannot imagine her making this up.” He said that he never witnessed Kavanaugh engage in any sexual misconduct, but did recall him being “frequently, incoherently drunk.”


We may never know the full truth, but too things are clear: (i) given the allegations, Kavanaugh does not belong on the U.S. Supreme Court ) or the DC Circuit), and (ii)  it is beyond disturbing that Senate Republicans don't care about the allegations - or women in general.

Posted by Michael-in-Norfolk at Monday, September 24, 2018

There may be more women. Brett just went on Fox news to screech that he was a VIRGIN all through high school. Not that any of his accusers is sayin he raped them. But that's the fox news false equivalence tour for you.