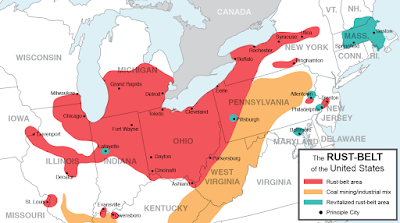 While much of the media - and, I will concede this blog - has been focused on the circus surrounding Brett Kavanaugh's unfortunate nomination tot he U.S. Supreme Court and Republicans' intent to push him through no matter what, there is positive news.  A piece I saw today showed a poll revealing that the generic candidate enjoyed a 12 point lead over the generic Republican candidate.  Secondly as the Virginian Pilot reports via a re-post of a Bloomberg story, things are NOT looking good for Republicans in the Rust Bet states that disastrously handed the White House to Der  Trumpenführer,  Cook's Political Report described the GOP situation as follows:

The Republican challenge of holding onto their tenuous House majority seems unrelenting; something could happen to alter the apparent trajectory of this election, but right now it seems headed for Democratic gains of between 20 and 40 seats, most likely more than the 23 necessary to tip control.

Similarly, on the state level, the losses could be quite high. Keep in mind that three-quarters of the nation’s governorships and four-fifths of the state legislative seats are up in this midterm-election cycle. As Democrats learned in 2010 and 2011, having catastrophic losses in the last midterm before redistricting ends up being the defeat that keeps on defeating for the rest of a decade. We could see GOP net losses of at least five and as many as 10 governorships and between 400 and 550 state legislative seats, perhaps with control of 10 or 11 legislative chambers flipping from red to blue.

Of course, making sure these predictions come to pass means that Democrats and independents sickened by the Trump/Pence/GOP agenda must get out and actually vote on November 6, 2018.  This is especially true for Blacks, Hispanics and younger voters.  But back to the Pilot/Bloomberg piece:


The Rust Belt states that provided an election night shocker two years ago — delivering the presidency to Donald Trump — could hand Democrats crucial wins in the midterm elections.

Wisconsin, Michigan and Pennsylvania, which Trump won in 2016 by a total of less than 80,000 votes to put him over the top in the Electoral College count, are looking less like Trump country this year, as Republicans trail Democratic opponents.

The shift illustrates the year’s challenging political landscape for Republicans. Even with a booming economy and record stock market — typically benchmarks of presidential success — the party’s chances of keeping control of the U.S. House have dropped in recent weeks. Trump’s vulnerabilities even threaten the party’s prospects of holding the U.S. Senate, long considered thought safe from Democratic takeover this year.

The situation confronting Republicans is typified in Wisconsin, where Trump beat Democrat Hillary Clinton by 22,748 votes, or 0.8 percentage points.

While times are generally good in the Badger State — the unemployment rate in July was 2.9 percent, down from 3.5 percent in the month Trump took office, and below the national average — Republican candidates are struggling.

Gov. Scott Walker, once a rising Republican Party star, is fighting for his political life, according to a Marquette University Law School Poll released on Sept. 18. The survey showed Democrat Tony Evers with the support of 49 percent of likely voters, compared with 44 percent for Walker.

Trump’s job approval has fallen to 42 percent in the state, down from 45 percent in Marquette’s August poll. Among independent voters, a pivotal group, 41 percent approve of his performance.

Many voters in Wisconsin, which the U.S. Chamber of Commerce says is among the states most vulnerable to a prolonged trade war, are also skeptical of Trump’s tariffs on China and other nations. More than half — 58 percent — think free trade agreements have generally been a good thing for the U.S. economy, while 25 percent think they have been bad for the economy.

Trump’s approval ratings in the other states in the region are equally low, according to polling in August by Morning Consult. He was at 42 percent in Michigan, 45 percent in Pennsylvania, 44 percent in Iowa and 40 percent in Minnesota.

While not included in the Marquette poll, Republicans are nervous about the congressional race in southeastern Wisconsin to replace retiring House Speaker Paul Ryan, even though it’s rated as “lean Republican” by Cook. The Congressional Leadership Fund, the top super political action committee backing Republican efforts to hold the House, said this week that it’s reserving $1.5 million in advertising for the district. In 2016, Ryan swept the district by almost 35 points.

Prospects for Republicans in the other Trump-won states in the Rust Belt aren’t looking much better.

In Michigan and Pennsylvania, Democratic incumbent Sens. Debbie Stabenow and Robert Casey have double-digit polling leads against their Republican challengers and also held massive cash-on-hand advantages in the most recent campaign finance reports.

In the fight for the House, Pennsylvania looks like one of the better pickup opportunities for Democrats. The state has two ingredients that could benefit the party in this year’s closest House races: suburban swing districts and an abundance of female candidates in a year when women are showing unprecedented levels of political engagement.

The contests for governor in Pennsylvania, Michigan and Minnesota are also rated as either “lean Democrat” or “likely Democrat.” Walker’s race in Wisconsin and another in Iowa that features a Republican incumbent — albeit the state’s former lieutenant governor, who rose to the post when long-serving Gov. Terry Branstad became U.S. ambassador to China — are rated as tossups.

Trump only very narrowly won there and those states have been heavily Democratic in recent history. Plus, Brabender said, Trump was competing against a deeply unpopular candidate in Clinton.

“Unfortunately for Republicans this year, she’s not on the ballot,” he said. “Being pro-Trump may not equate to being pro-Republican.”

It remains critical to get every possible Democrat voter registered and to the polls on election day.  I don't want the Republicans to lose - I want them to lose by landslides that will send terror through whatever Republicans remain in office, including those in the Virginia Senate and House of Delegates.  They need to understand that 2019 could see them sent into retirement if they continue their racist, voter disenfranchising and homophobic ways.
Posted by Michael-in-Norfolk at Monday, September 24, 2018