Other Nations at U.N. Openly Laughed at Trump 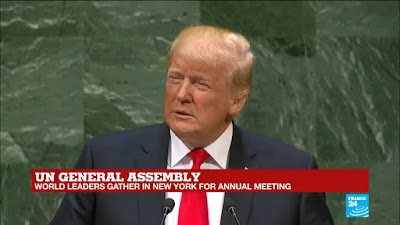 Having traveled in France and the United Kingdom earlier in the month, I can honestly say that having Donald Trump as the occupant of the White House proved to be an embarrassment.  Trump is literally loathed in both nations (a feeling I can fully appreciate).  Now, that loathing came home to roost as Trump engaged in a narcissistic spew of batshitery at the United Nations.  His reality free speech literally triggered laughter from diplomats from around the world and not because Trump was telling jokes.  Rather Trump himself was the joke as is America the joke given that it has such a buffoon in the White House who could not even win the popular vote.   Trump and his evil minion, Mike Pence are quickly isolating America from the rest of the world which, if past allies, China and developing countries come together with new trade and climate treaties could damage America greatly.  Only Trump and his knuckle dragging base don't seem to realize that significant long term damage is being done.  A piece in the Washington Post looks at Trump's - and by extension, America's - plummeting stature on the world stage.  Here are excerpts:

President Trump has long argued that the United States has been taken advantage of by other nations — a “laughing stock to the entire World,” he said on Twitter in 2014 — and his political rise was based on the premise that he had the strength and resolve to change that.

But at the U.N. General Assembly on Tuesday, Trump got a comeuppance on the world’s biggest stage. Delivering a speech that aimed to establish U.S. “sovereignty” over the whims and needs of other nations, the president’s triumphant moment was marred in the first minute when he was met by laughter — at his expense.

The embarrassing exchange came when Trump boasted that his administration had accomplished more over two years than “almost any administration” in American history, eliciting audible guffaws in the cavernous chamber hall.

“He has always been obsessed that people are laughing at the president. From the mid-’80s, he’s said: ‘The world is laughing at us. They think we’re fools,’ ” said Thomas Wright, a Europe analyst at the Brookings Institution. “It’s never been true, but he’s said it about every president. It’s the first time I’m aware of that people actually laughed at a president. I think it is going to drive him absolutely crazy. It will play to every insecurity he has.”

For Trump, the moment wasn’t just embarrassing. It also punctured one of the core fabulist assertions of a president who has, according to Washington Post fact-checkers, made more than 5,000 false or misleading statements since taking office.

As the midterm elections approach, Trump has begun boasting of a long list of accomplishments for his administration, at one point reciting them at a recent campaign rally from two pieces of paper that he pulled from his suit jacket.

In doing so, the president typically has claimed sweeping success and placed himself favorably in historical comparison to the nation’s greatest leaders. At a rally in Springfield, Mo., last week, Trump was wrapping up an hour-long address to supporters with some flowery teleprompter prose about the courage of America’s founders when he strayed from the script to assert that his election in 2016 was “the greatest movement in the history of our country.”

At the United Nations, Trump’s claim to have done more in less than two years than most of the 44 previous administrations defied any bounds of reality — or hubris. The difference was that he was not talking to a room full of excited, red-hat-wearing “MAGA” supporters who cheer him on.[Y]ou kind of feel good that Trump was finally escaping the bubble of political rallies that continually gives him the impression that everyone agrees with the false claims he is making,” said Smith, who watched Trump’s speech from Berlin, where she is spending a year as a fellow at the Bosch Academy. “There was a moment I thought to myself, ‘This is good that the president is being exposed to how the rest of the world sees him.’ ”

“The world just laughed @realDonaldTrump,” comedian Wanda Sykes tweeted. Referring to the famed theater in Harlem in which the audience boos and heckles bad performers offstage, she added, “Stay tuned, they might go full ‘Showtime at the Apollo’ on him.”

By the afternoon, Trump was projecting an air of nonchalance, telling reporters that his boast in the speech “was meant to get some laughter.” But most observers weren’t buying it from a president who seldom laughs at himself and whose default expression is an unsparing glare.

“It’s got to hurt,” said Wright, the Brookings Institution analyst. “It was on camera and it was spontaneous. It was on one of the biggest stages in the world.”


Anyone who truly cares about America, including its standing in the world, should want Trump - and his ass kissing, yes am VP, Mike Pence - removed from office as soon as possible.  It will tajke years to undo the damage being done to the long term prospects of the nation.
Posted by Michael-in-Norfolk at Wednesday, September 26, 2018