48% Of Evangelicals Back Kavanaugh Even If Guilty 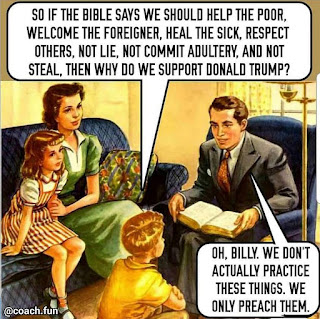 After today's testimony by Christine Blasey Ford - who came across as a totally credible witness - and the belligerent response of Brett Kavanaugh, it is unclear whether the Senate Republicans will belatedly uphold decency and have a detailed FBI investigation and delay their vote or give Kavanaugh - who seems cut from the same cloth as some I knew in college who participated in "trains" on incapacitated or inebriated young women - a pass and place him on the Supreme Court.  Regardless of the outcome, Senate Republicans have made it totally clear that the GOP can no longer claim any shred of morality high ground.  Most disturbing is the reality that nearly half of evangelical Christians want Kavanaugh confirmed EVEN IF HE's GUILTY.  After two decades of monitoring evangelicals and "family values" organizations and witnessing the manner in which evangelicals Christians ushered in the embrace of lies and moral bankruptcy overtake the GOP, I candidly am not surprised.  As I have said a number of times, no group lies more or is more filled with hypocrisy than evangelicals who parade around with false piety and while making a mockery of the message of the New Testament.  A piece in Vox looks at the moral bankruptcy of evangelicals.  Here are excerpts:


Forty-eight percent of white evangelicals say that embattled Supreme Court nominee Brett Kavanaugh should be confirmed even if the allegations of sexual assault against him are true.

Marist asked 1,000 respondents from September 22 to 24 whether they would support Kavanaugh if the allegations by Christine Blasey Ford, who says Kavanaugh assaulted her at a high school party decades ago, were found to be true.

Support for Kavanaugh’s confirmation falls along partisan lines with 12 percent of Democrats and 54 percent of Republicans saying yes.

Aside from the 48 percent who said they would support Kavanaugh’s appointment to the court, 36 percent of white evangelicals say they would not support it, and 16 percent did not have an answer. Mirroring the poll results, many prominent white evangelicals have spoken out in Kavanaugh’s defense, characterizing the allegations against him as part of a liberal plot to waylay his nomination. Jerry Falwell Jr., president of the evangelical Liberty University, sent 300 women Liberty students to Washington, DC, to support Kavanaugh during this week’s Senate confirmation hearings.

Likewise, prominent evangelical Franklin Graham has expressed support for Kavanaugh, minimizing the nature of the alleged assault and characterizing it as merely a clumsy come-on, telling the Christian Broadcasting Network, “She said no and he respected it and walked away.”

Yet the Marist poll results suggest that, for many white evangelicals, another factor is at play in their support for Kavanaugh: They don’t think what he did is bad enough to be disqualifying.

Or, as one unidentified woman Trump and Kavanaugh supporter from Montana said, according to MSNBC, “It’s no big deal.” While the woman did not reveal her own religious affiliation, her words are nevertheless indicative of many conservatives’, particularly white evangelicals’, stance on the allegations against Kavanaugh.

Such a perspective fits neatly within the context of evangelical sexual culture, which in recent months has been characterized by a wider suspicion of the #MeToo movement. Within evangelical culture, as I’ve written previously, the idea that women are “supposed” to be the gatekeepers of male sexuality, that male sexual urges are inherently uncontrollable, and the idea that forgiveness is automatically “owed” to any alleged abuser, converge to create a climate in which allegations of sexual harassment and abuse tend to be seen as minor or, at least, forgivable.

Certainly, the evangelical community is already redeeming its own people accused of sexual misconduct during the #MeToo movement. Earlier this month, former Southern Baptist Convention president Paige Patterson — who left his position as president of the Southwestern Baptist Seminary in disgrace after accusations of sexism — returned to public ministry with a pair of sermons that denigrated the #MeToo movement and focused on the problem of false rape allegations.

Today, as Christine Blasey Ford testifies in front of the Senate, GOP senators will be trying to argue that her assault never happened. But what might be even scarier is the idea that, if it did, plenty of Americans wouldn’t even care.

I cannot undo the reality that I was baptized as a Christian, but I will certainly do all in my ability to distance myself from evangelical/conservative Christians and the toxic moral bankruptcy that they represent.
Posted by Michael-in-Norfolk at Friday, September 28, 2018