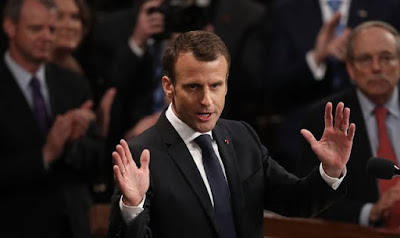 Since the end of World War II, America has been one, if not the only, preeminent super power in the world.  Much of this hegemony was accomplished and maintained through international alliances such as NATO and trade treaties.  Now, the Trump/Pence regime is shredding the template that has kept America strong and seeking to destroy mostly beneficial trade treaties.  Indeed, Trump and his sinister and apparently equally ignorant Vice President seemingly want to take America back to 1920's - 1930's style isolationism (which helped set the stage for WWII) even though the world and global trade has changed radically in the intervening almost 100 years.  The mindset is just as delusional as pro-Brexit voters in the United Kingdom who dream of the long gone British Empire.  Today, French President Emmanuel Macron suggested what may become a new reality as America slinks back into isolationism: a unified Europe, Mexico, Canada, South America and most of Asia all joining in trade agreements that would truly isolate America.  A piece in The Independent looks at the possible picture of the future.  Here are article highlights:


Emmanuel Macron has announced France will no longer accept “commercial agreements” with countries that do not “respect” the Paris Climate Accord during a fiery speech at the United Nations General Assembly.

The French president called for the upholding of trade rules that “guarantee fair competition on equal footing” during his Tuesday speech, following a Monday afternoon meeting with Donald Trump and the US president’s speech on Monday morning. Mr Macron appeared defiant towards Mr Trump, suggesting he’d no longer negotiate trade deals with the US after its withdrawal from the climate agreement last year.

The US is now reportedly the only nation in the world which remains opposed to the Paris Agreement, after Mr Trump decided to pull out of the accord in 2017.

He also criticised the president’s decision to pull out of the Iran Nuclear deal, touting its success in preventing the country’s "nuclear military path”.

“What will bring a real solution to the situation in Iran and what has already stabilised it? The law of the strongest? Pressure from only one side? No!“ he said. “We know that Iran was on a nuclear military path but what stopped it? The 2015 Vienna accord.”

The speech deeply contrasted that of Mr Trump, who spoke on Monday about “America’s policy of principled realism,” while criticising components of the United Nations.

“We will not return to the Human Rights Council until real reform is enacted. We will also not provide any support to the International Criminal Court,“ he [Trump] said, adding that “the ICC has no authority. It violates all principles of justice and due process.”

“We will never surrender America’s sovereignty,” Mr Trump continued. “We reject the ideology of globalism. America is governed by Americans.“

[Trump] The president also announced the US would reduce its funding towards the UN peacekeeping budget to under 25 per cent.

I'm sure that Trump supporters will sneer at France's position, but before they do so, they might want to reflect on the reality that France has a transportation/infrastructure far better than America's and a health care system that is the most efficient in the world which doesn't leave its citizens in bankruptcy when serious illness occurs.
Posted by Michael-in-Norfolk at Wednesday, September 26, 2018