Trump Is Poised to Embroil America in New Wars 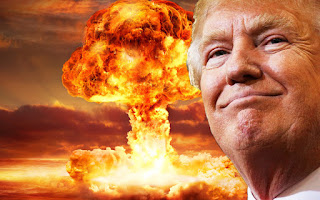 Anyone who has truly followed Donald Trump's career over the years will note one thing: the lives of others means nothing to the man and all that matters is satiating Trump's overweening ego.  Previously, Trump - Der Trumpenführer as I prefer to call him since he embodies some of the most dangerous elements of Adolph Hitler and Benito Mussolini - has stated that only some "major event" will unify America in the wake of his divisive campaign.  What could such a major event involve?  In his latest piece in New York Magazine, Andrew Sullivan suggests that Trump will ignite new wars in the hopes of rallying the country behind him. In making his argument, Sullivan cites Plato's Republic which traces the decline of a republic into a tyranny - a historical work likely unknown to Trump and certainly unknown to most of his white supremacist and Christian extremist supporters - which aptly notes that throughout history would be tyrants have used war and foreign adventures to rally domestic support in the face of principled resistance.  Her are article highlights:

Every now and again, when I find myself buried in the latest blizzard of invariably disturbing news emanating from the Trump White House, I go back and remind myself of the core narrative. I read Plato’s Republic again, the prism through which I first raised the alarm about Donald Trump’s emergence. The prism is essentially how a late-stage democracy, dripping with decadence and corruption, with elites dedicated primarily to enriching themselves, and a people well past any kind of civic virtue, morphs so easily into tyranny. This is the second phase of tyranny, after the more benign settling-in: the purge. Any constraints that had been in place to moderate the tyrant’s whims are set aside; no advice that counters his own gut impulses can be tolerated. And so, over the last couple of weeks, we have seen the president fire Rex Tillerson and Andrew McCabe, two individuals who simply couldn’t capitulate to the demand that they obey only Trump, rather than the country as well. And so Tillerson has been replaced by a fawning toady, Mike Pompeo, a man whose hatred of Islam is only matched by his sympathy for waterboarders. Pompeo has been replaced in turn by a war criminal, who authorized brutal torture and illegally destroyed the evidence, Gina Haspel. Whatever else we know about Haspel, we know she follows orders. And then last night, we saw McMaster fall on his sword, replaced by John Bolton, an unrepentant architect of the most disastrous war since Vietnam, a fanatical advocate for regime change in Iran, an anti-Muslim extremist, and a believer in the use of military force as if it were a religion. And this, of course, is also part of the second phase for Plato’s tyrant: war. “As his first step, he is always setting some war in motion, so that people will be in need of a leader,” Plato explains. In fact, “it’s necessary for a tyrant always to be stirring up war.”

And everything we know about Trump’s character tells us that war is probably the only aspect of foreign relations he intuitively understands. He cannot exist as an equal party in an international system. He has to dominate other countries the way he does other human beings. And, when you look back, you see this has been obvious all along. On trade, he has long been rhetorically at war with our closest neighbors and trading partners, and now he has unveiled the contours of a major trade war with China; we already have a renewed and deeper presence in Afghanistan; and we have long been supporting the Saudi monarchy’s proxy and inhumane war with Iran in Yemen.

The real possibility of a nuclear conflict with North Korea is getting more real by the day (can you imagine Bolton’s counsel for the Kim Jong-un meeting?); and with Bolton in place, the groundwork for ending the Iran nuclear deal is also finally complete. And what’s noticeable in all this is the irrelevance of the Senate. They refuse to reclaim their treaty-making powers with respect to trade (they could end Trump’s China shenanigans overnight); they have abdicated any influence on foreign policy and war just as they have done nothing to protect the special counsel. They are just like the Roman Senate as the republic collapsed. The forms survive; there is nothing of substance behind them.

When the U.S. detonates the Iran Nuclear Accord, the European alliance, in so far as it still staggers onward, will reach crisis point; and the Iranian regime will likely accelerate its nuclear weapons program. They’d be crazy not to. At which point, the path to war starts (or rather is very hard to stop). Kushner is the key figure here, I suspect. His support for the Israeli hard right (he doesn’t just support the West Bank settlements, he funds them) and his very cozy relationship with the new Saudi prince/dictator both point in one direction: war with Iran. Getting the Americans to launch such a war is Jerusalem’s and Riyadh’s wet dream – which is why the reports of the Crown Prince’s boasting about Kushner being “in his pocket” are far from implausible.

All of these developments, I bet, have reached a new intensity because of Robert Mueller’s cumulative legal cornering of Trump, especially the special counsel’s recent crossing the line into the finances of the Trump Organization. At that point, I suspect Trump realized he was more vulnerable than he previously believed, and went on full offense everywhere. I was long a skeptic of Trump’s alleged conspiracy with Russia in 2016, but every single development in the last few months keeps pointing in the same direction — and it isn’t Trump’s exoneration.

Yesterday, we discovered that Guccifer 2.0, Roger Stone’s online pen pal, is actually a Russian agent. Trump’s initial refusal to say — even through his spokeswoman — that Russia is clearly responsible for the release of a nerve agent in a country which is one of our closest allies was simply staggering. As is his continued refusal to confront seriously the threat Putin clearly poses to democratic elections in the West. The extraordinary leak of the warning from his national security team not to congratulate Putin during the recent call is yet another sign, it seems to me, that even those working closest to the president want to alert the world about the threat to our national security that is coming from the Oval Office itself.

Part of me, of course, has long worried and hoped that my assessment of Trump as truly the tyrant of Plato’s imagination is melodramatic overkill. I’m given to excitability, even catastrophism. I’ve been wrong before. And there are many ways in which American life still seems the same.

We still hold elections — even if the president asserts that they are all rigged against him. In November, we have a chance to use the ballot box to save this country, and there are some signs that a wave is building. The courts still have some independence and feistiness; the media is still free, if now accompanied by a full-bore state propaganda channel.

But I worry that the more Trump is opposed and even cornered — especially if he loses the House this fall — the more dangerous he will become. If Mueller really does have the goods, and if the Democrats storm back into congressional power, then Trump may well lash out to protect himself at all costs. We know he has no concern for the collateral damage his self-advancement has long caused in his private and public life. We know he has contempt for and boundless ignorance of liberal democracy. We know he is capable of anything — of immense cruelty and callousness, of petty revenge and reckless rhetoric, of sudden impulses and a quick temper. We also know he is commander-in-chief, who may soon need the greatest distraction of all.

War is coming. And there will be nothing and no one to stop him.