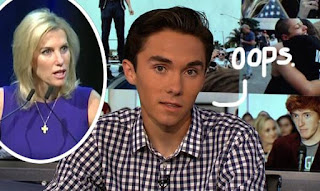 If one listens to the spokesmen and pundits of the far right, they would have you believe that they are the protectors of morality, decency and civic virtue even as they behave as little better than cyber bullies and support and occupant of the White House who boasts of sexual assaults, cavorts with porn stars and is utterly devoid of even a shred of basic morality.  The true ugliness of these people and the far right and Christofascists has revealed itself in many ways, not the least of which has been merciless attacks on the student activists from Marjory Stoneman Douglas High School in Parkland, Florida, as previously noted on this blog.   Earlier this week, right wing nut, Laura Ingraham joined the list of attackers and singled out David Hogg for special bullying.  To his credit, Hogg hit back and called for advertisers to dump Ingraham's show.  Amazingly, advertisers began to do just that in a hopeful sign that the majority of Americans and the business world have decided they are down with the ugliness of Fox News and similar propaganda sites.  Now, as CBS News reports, Ingraham has suddenly announce a vacation as the much deserved shitstorm she started swirls around her.  Here are highlights:

Fox News' Laura Ingraham announced Friday she would be taking a vacation the next week to celebrate Easter with her family as advertisers have dropped her show after she criticized a Parkland school shooting survivor. Her supporters have launched the hashtag #IStandWithLaura.

In April 2017, embroiled in an advertiser boycott, Fox News' Bill O'Reilly announced he would be taking vacation for Easter. He was later fired by the network.

Eleven companies so far have withdrawn their ads from Ingraham's Fox News program after she feuded with a survivor of the Parkland, Florida, school shooting over Twitter. The Atlantis, Paradise Island resort; Office Depot, Jenny Craig, Hulu, Nutrish, TripAdvisor, Expedia, Wayfair, StitchFix, Nestlé and Johnson & Johnson said they would pull ads from the show.

Ingraham on Wednesday posted a mocking tweet of high school senior David Hogg, taunting him for not getting into some colleges he had applied to. In response, Hogg tweeted a list of advertisers on Ingraham's show and called on followers to contact them.
Nutrish was the first to say it would stop advertising on Ingraham's program, and other brands followed.

Ingraham apologized in a tweet the following day, citing "the spirit of Holy Week," and invited Hogg to appear on her show.  Hogg dismissed her statement. "She only apologized after we went after her advertisers," he told the New York Times. Ingraham has stayed silent since her tweet on Thursday.

It's unclear how much of an impact the advertiser exodus will have on Ingraham's program. The 11 who have left are a small portion of the 129 companies that have run ads on her program in the last 10 days, reports Media Matters,  . . . . . On Thursday night, Ingraham's show ran a "filler" ad, indicating it could be having trouble selling.

Remember, if you want to see true moral decency, you will NOT find it on Fox News or in the pews of evangelical Christian churches.
Posted by Michael-in-Norfolk at Saturday, March 31, 2018