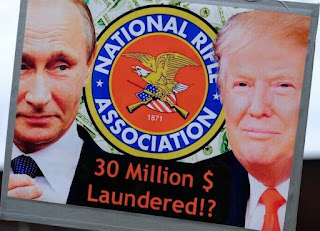 For some time there have been questions swirling around about whether or not the National Rife Association ("NRA") laundered Russians funds and directed them to the Trump campaign or the campaigns of other Republicans bought by the NRA.  Indeed, the Federal Elections Commission and FBI are investigating this very issue. Now, it has come out that the NRA has in fact accepted foreign funds although it has offered a mealy mouth story line that (i) none of these foreign funds came from Russia, and (ii) none of the funds have been given to any political campaigns. Never mind Russia's use of shell corporations in Cyprus and other locales to hide Russia as a funding source and/or that once cash is deposited into a bank account, the funds are fungible and can easily find their way to political campaigns.  Talking Points Memo looks at this breaking story which, if we are lucky, will cause immense problems for both the NRA and the Trump/Pence regime.  Here are highlights:

The National Rifle Association is acknowledging that it accepts donations from foreign entities, and that it moves money between its various accounts “as permitted by law.”

The gun group insists it has never received foreign money in connection with an election. But campaign finance experts say that, since money is fungible, that assurance doesn’t mean much.

Though it’s a long way from being confirmed and may never be, the NRA’s new admissions offer perhaps the most compelling evidence yet that foreign money could have allowed the group to conduct political activities boosting Trump.

The admissions came in a recent letter to Sen. Ron Wyden (D-OR), who has sought answers about the group’s foreign funding, following reports that the FBI is probing whether a Russian banker funneled money to the NRA to benefit the Trump campaign.As TPM has reported, that makes it difficult to trace if the NRA legally received foreign money into its general accounts, then transferred the same amount into an account that can be used for political spending.

“Even if the NRA segregated the foreign money that it received, money is fungible,” Brendan Fischer, a campaign finance expert at the Campaign Legal Center, told TPM. “Foreign money in one account frees up money that can be used for elections in another account.”

“This is a very carefully worded letter that appears designed to give the impression that the NRA does not take foreign money for its election work, but reading between the lines, it does not actually say that,” Fischer added. “The NRA said it did not receive foreign money in connection with the U.S. election. It does not say that foreign money was not used in a U.S. election.”

Paul S. Ryan, Vice President of Policy and Litigation at good-government group Common Cause told TPM that the system described in the gun organization’s letter means that “foreign money subsidizes the NRA’s U.S. political spending.”[I]nvestigative bodies might have access to additional evidence that could determine how Russia or other foreign entities wanted their money to be spent. The FBI is reportedly investigating whether Russian banker and lifetime NRA member Aleksandr Torshin channeled money to the group with the express purpose of helping Donald Trump win the 2016 presidential race.In a follow-up letter sent Tuesday, Wyden asked Frazer for an in-depth account of how foreign donations were used over the past thee years, and whether Russian nationals were members of the NRA’s donor programs, among other questions.

One issue of interest to Wyden: how the organization makes “transfers between accounts are made as permitted by law,” as Frazer acknowledged it does.