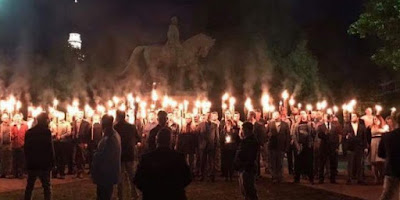 Like many Virginians and certainly countless University of Virginia alumni, I was both outraged and sickened by the Neo-Nazi and white supremacist rally in Charlottesville, Virginia, last August, and by the extremists trespassing on the University of Virginia grounds.   With family members residing in Charlottesville, I know just how furious city residents were to have outside hate merchants and bigots invade their city.  Indeed, in perhaps a slap in the face to right wing forces and politicians who pandered to racists - think Mr. Gillespie - Charlottesville voted roughly 85% for Democrat Ralph Northam in November 2017.  Now, the City of Charlottesville has reached a consent agreement that bans some of the groups that invaded the city - members of which Trumpenführer described as "good people" - from protesting in the city in the future.  A piece in The Hill looks at the outcome.  Here are excerpts:

A white supremacist group that took part in the deadly Charlottesville, Va., Unite the Right rally last year will no longer be able to protest while armed in the city, a Virginia court has decided.

The League of the South, a neo-Confederate hate group, reached a deal with city organizers on Monday to keep its members, agents or state chairmen from taking part in any future armed demonstrations in Charlottesville, according to the watchdog Southern Poverty Law Center  (SPLC).

The consent decree was the result of a lawsuit first filed in Charlottesville Circuit Court by Georgetown Law's Institute for Constitutional Advocacy and Protection against leaders of the League of the South and other paramilitary groups involved in the rally, which led to the death of one woman and injuries for several others.

The city government and several local businesses later joined the ongoing lawsuit, which names the individual leaders of other white supremacist groups, allowing the opportunity that more groups might strike similar deals with the city.

Spencer Borum, the group's Kentucky leader, has taken an active role in arming and training the League of the South for possible civil conflict in the U.S., the SPLC says.

Another League of the South leader, Michael Tubbs, pleaded guilty to the 1991 robbery of weapons from an Army base with the intention of arming the Ku Klux Klan, as reported by the Daily Beast.