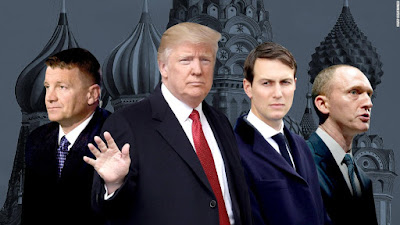 While Der Trumpenführer, and House Republicans continue to claim the Russiagate investigation  is a "witch hunt," two new developments could well show that claim to be a lie.   First, it now seems that George Papadopoulos - who has copped a guilty plea and is working with Robert Mueller - was told by Trump campaign officials to make contact with the Russians and secured campaign approval before he sought to explore what Russia could do for the campaign.  So much for Trump's claim that Papadopoulos was a glorified coffee boy.  Potentially even more devastating is word the British officials have raided the London offices of Cambridge Analytica and are seizing the company's data base and servers - items that might provide a clear and indisputable link between Russian intelligence officials and the Trump campaign.  Trump in typical form has tried to distract the media - or at least the GOP's Christofascist base - by announcing a new ban on transgender members of the U.S. military.   First this from the Washington Post on Papadopoulos' direction from the Trump campaign:

When a Russian news agency reached out to George Papadopoulos to request an interview shortly before the 2016 election, the young adviser to then-candidate Donald Trump made sure to seek approval from campaign headquarters.

“You should do it,” deputy communications director Bryan Lanza urged Papadopoulos in a September 2016 email,  . . .

The exchange was a sign that Papadopoulos — who pushed the Trump operation to meet with Russian officials — had the campaign’s blessing for some of his foreign outreach.

Since Papadopoulos pleaded guilty last year to lying to the FBI about his Russia contacts during the campaign and agreed to cooperate with special counsel Robert S. Mueller III, Trump officials have sought to paint the 30-year-old energy consultant as a low-level volunteer whose outreach to Russia was not authorized by the campaign — and in some cases was actively discouraged.

Emails described to The Washington Post, which are among thousands of documents turned over to investigators examining Russian interference in the 2016 campaign, show Papadopoulos had more extensive contact with key Trump campaign and presidential transition officials than has been publicly acknowledged.

Among those who communicated with Papadopoulos were senior campaign figures such as strategist Stephen K. Bannon and adviser Michael Flynn, who corresponded with him about his efforts to broker ties between Trump and top foreign officials, the emails show.

In a tweet after Papadopoulos pleaded guilty, Trump wrote that “few people knew the young, low level volunteer named George, who has already proven to be a liar.” Another Trump campaign staffer dismissed Papadopoulos as a mere “coffee boy” during the campaign.
At the end of March, Papadopoulos attended a meeting of Trump’s newly named national security advisory group at the candidate’s not-yet-opened hotel in Washington. After introducing himself, the young adviser announced he could organize a meeting between Russian President Vladi­mir Putin and Trump, according to court documents.


That Trump and his circle of sycophants have lied about Papadopoulos'  roll should surprise no one not living under a rock or only watching Fox News.


Adding to the fun is the fact that British authorities, as noted above, raided the London offices of Cambridge Analytica which may have been the go between for Russian intelligence and the Trump campaign.  One can only imagine what goodies that company's data base and computer servers may yield.   Here are highlights from Politico:

Around 18 investigators were seen entering the company’s London headquarters after obtaining a warrant to search its database and servers Friday night, the Guardian reported. The search lasted seven hours, according to the BBC.

“This is just one part of a larger investigation into the use of personal data and analytics for political purposes,” the Information Commissioner’s Office said late Friday after receiving the warrant. “As you will expect, we will now need to collect, assess and consider the evidence before coming to any conclusions.”

The search is the latest development in a ballooning scandal enveloping both the firm and Facebook. Officials on both sides of the Atlantic are scrutinizing the companies amid accusations that Cambridge Analytica may have used 50 million Facebook users’ data without proper consent to help U.S. President Donald Trump’s election.

Perhaps the Brits will expose what the Congressional Republicans have been working so hard to keep hidden.