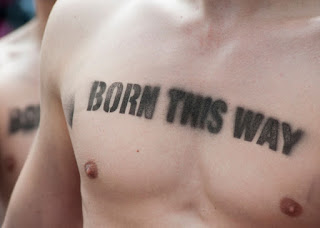 During the last session of the Virginia General Assembly an effort was made to ban licensed therapists from subjecting those under age 18 to so-called "conversion therapy" or "ex-gay" therapy which is universally condemned by every legitimate American medical and mental health association.   Like every other pro-LGBT bill during the session, the ex-gay ban was killed by Republicans only too happy to prostitute themselves to The Family Foundation, Virginia's largest hate group.  Yesterday, Washington State demonstrated the urgency of Democrats capturing control of the Virginia Senate and House of Delegates as Washington State's governor signed into law a ban on fraudulent ex-gay therapy that is harmful to those subjected to it and which has less legitimacy than one might observe from a witch doctor of old.   Indeed, the only supporters of such "therapy" are Christofascists still desperate to claim that sexual orientation is a choice both to appease their warped beliefs and to harm gays politically.  Joe Jervis has details:

“Today, Washington State takes a huge step forward in protecting LGBTQ children by banning this backwards practice, which not only puts the lives of LGBTQ children at risk, but has been rejected by the medical community time and again.

“It would not have been possible for Governor Inslee to sign this bill into law without the support of the new Democratic state Senate. Last fall, Washington voters elected Manka Dhingra to the state Senate, which flipped control of the chamber and gave Democrats full control of the state government. In just a few months, Washington Democrats expanded protections for the LGBTQ community and fought for voting rights, equal pay, gun safety and net neutrality. . . . When Democrats lead with our values, organize early and reach voters in every ZIP code – we win.”

RELATED: The Maryland Senate yesterday also banned ex-gay torture in a 34-12 vote. The bill now goes to the Maryland House.

Hi! I was just curious if there are any therapists (licensed or otherwise) who are doing this type of therapy in Virginia? If there are, we should publish their names and practices and boycott them and sue them under existing civil codes since what they are doing is torture.

I suspect that there are. It would take some further investigation to come up with names and addresses.