Another Shoe Just Dropped in the Mueller Probe 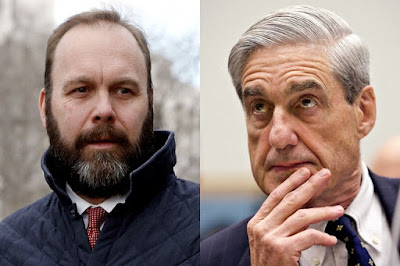 With Donald Trump, a/k/a Der Trumpenführer, with no legal counsel in the Russiagate investigation other than Jay Sekulow, a Christofascist lawyer who some believe skimmed millions from supposed charities operated by he and his family members, Robert Mueller has "dropped another shoe" via information contained in a new federal court filing.  Sekulow has a long history of working with Christofascist extremists such as Pat Robertson.  As for his questionable business practices, Think Progress has this:

Sekulow’s business model bears more resemblance to Trump University than it does to an ordinary legal non-profit. Between 1998 and 2011, according to an investigation by The Tennessean’s Bob Smietana, two Sekulow-run charities “paid out more than $33 million to members of Sekulow’s family and businesses they own or co-own, according to the charities’ federal tax returns.” That includes “$2.74 million in private jet lease payments to companies owned by Jay Sekulow and his sister-in-law, Kim Sekulow,” and $15.4 million to a law firm co-owned by Jay.


True, Sekulow would seem to be cut out of the same cloth as Trump given his history self-aggrandizement and and self-enrichment.  But that will likely have no bearing on Sekulow's ability to defend Trump in what appears to be a tightening noose around Trump and his closet sycophants.  Worse yet for Der Trumpenführer is the reality that reputable and competent attorneys are declining his invatations to join his legal team.  As for the latest Mueller development, a piece in the Washington Post looks at where the Russiagate investigation could be heading and the increasingly high stakes game Trump may be recklessly playing.  Here are highlights:

Another shoe just dropped in the Russia investigation. And it may leave a large footprint.“Manafort associate had Russian intelligence ties during 2016 campaign, prosecutors say,” reads The Post’s headline this morning. The story reports:

The FBI has found that a business associate of former Trump campaign chairman Paul Manafort had ongoing ties to Russian intelligence, including during the 2016 campaign when Manafort and his deputy, Rick Gates, were in touch with the associate, according to new court filings.

The documents, filed late Tuesday by prosecutors for special counsel Robert S. Mueller III, also allege that Gates had said he knew the associate was a former officer with the Russian military intelligence service.

Gates, of course, was Donald Trump’s deputy campaign manager, and he pleaded guilty to lying to the FBI and is now cooperating with the Mueller probe. The associate is unnamed in the filing, but The Post notes the description matches Konstantin Kilimnik, the Russian manager of Manafort’s lobbying office in Kiev.

As the filing puts it, Gates was “directly communicating in September and October 2016” with that associate, who had “ties to a Russian intelligence service … in 2016.” And Gates knew of those ties, the filing also says, noting that another figure involved in those conversations has already testified to the special counsel’s office that “Gates told him” the person was a “former Russian intelligence officer.” That means Mueller is now alleging that Trump’s deputy campaign manager knew in the fall of 2016 that his and Manafort’s business associate had ties to Russian intelligence.  [Paul] Rosenzweig [who was special counsel during Ken Starr’s investigation of Bill Clinton] also said that these new revelations do raise some important possibilities. First, they suggest that Manafort — who was Trump’s campaign chair deep into August 2016 — likely knew his associate had connections to Russian intelligence, since if Gates knew, Manafort also probably knew. “At a minimum that says something about his willingness to work with people who have ties to Russian intelligence agencies,” Rosenzweig said. “That raises the question of whether Manafort was a conduit of Russian influence on the campaign,” though he may have been an “unwitting dupe” in this regard.

Indeed, Politico recently reported that people around Trump are deeply worried about what Gates can tell Mueller, because that might end up inducing Manafort to conclude that his legal jeopardy is so severe that he should flip. Gates can perhaps tell Mueller what Manafort knew at the time about the associate’s ties to Russian intelligence.

Finally, putting this information in the filing might end up protecting the Mueller probe itself. “Mueller’s biggest strategic risk is being fired,” Rosenzweig said. “The more they put Russia into the equation, the harder it is for Trump to fire him.”

The new Mueller filing, . . . . , could make it that much harder politically for Trump to try to shut down or hamstring the probe. And if that’s what this latest shoe dropping accomplishes, that itself will leave a pretty big footprint.