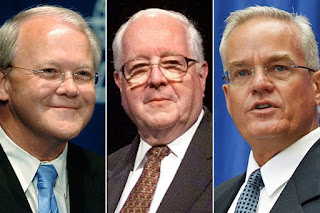 While the never ending sex abuse scandals plaguing the Catholic Church continue to remind the world of the moral bankruptcy complete hypocrisy of the  Church hierarchy - my Google search agent delivers new sex abuse coverage somewhere in the world literally every single day - evangelical Christians are likewise having their hypocrisy put on display as a number of prominent "leaders" are facing sex abuse scandals of their own.  This fact, combined with (i) some 80% of evangelicals supporting Trump, and (ii) the endless deliberate lies and untruths disseminated daily by "Christian family values" organizations, underscore that these folks who want to lecture or condemn others about morality are the LAST people who should be claiming the mantle or moral superiority on any subject.   They are modern day Pharisees plain and simple.  A piece in the Washington Post looks at four prominent evangelicals swept up in sex scandals.   Here are highlights:

As white evangelicals have been some of President Trump’s staunchest defenders, a handful of their leaders find themselves contending with a problem all too familiar to the commander in chief: a sex scandal.

[S]ome observers wonder whether evangelicals are experiencing a repeat of the scandals that led to the downfall of several well-known televangelists in the 1980s.

[T]here’s a growing — but not fast enough — realization in church life of the way that power can easily be abused in predatory ways, especially spiritual power.

Most recently, Frank Page, president and chief executive of the SBC’s [Southern Baptist Convention] executive committee, announced his resignation because of an “inappropriate relationship.” Page did not divulge the details of his relationship on Tuesday, but in a statement he called it a “personal failing” . . . . Page was among a group of evangelical leaders who last September met with and praised Trump in the Oval Office.

In another case, Bill Hybels, who co-founded Willow Creek, one of the nation’s largest churches, came under the spotlight last week after the Chicago Tribune published a series of allegations that he made suggestive comments, extended hugs, an unwanted kiss, invitations to a staff member to hotel rooms and had a consensual affair with a married woman. . . . . after Hybels responded to the allegations to his congregation, calling them “flat-out lies,” he received standing ovations.

Some fear that women are still being discredited in a climate in which a high majority of white evangelicals support Trump despite the multiple sexual harassment and misconduct allegations he has faced. Nearly 8 in 10 white evangelicals approve of Trump’s job performance, compared with 39 percent of all Americans, according to a survey by the Pew Research Center.Wehner says he fears the “circling of the wagons” approach toward protecting leaders instead of victims. . . . “A lot of people are going to think it’s laced with hypocrisy,” he said. “They say one thing and do another. And that the faith is not transformative, faith is just a proxy for political tribalism.

In a recent piece for the Gospel Coalition, evangelical author and speaker Andy Crouch wrote about the danger of evangelicals’ attraction to celebrity power. . . . “Megachurch pastors have the temptation of being a celebrity of sorts and have an aura around them,” Thumma said.

Earlier this year, a woman said Andy Savage, a megachurch pastor in Memphis, sexually assaulted her 20 years ago, when she was a high school student and Savage was a youth pastor in Texas. After he addressed his congregation, apologized and asked for forgiveness, it applauded him. He has since resigned.

In another case, late last year, Paul Pressler, who helped lead a conservative takeover of the Southern Baptist Convention in the late 1970s and early 1980s, was accused of sexually abusing a young man for several decades, starting when the alleged victim was 14. A pending lawsuit against Pressler, who is a former justice on the Texas 14th Circuit Court of Appeals and who served in the Texas legislature, also names Southwestern Baptist Theological Seminary and its president, Paige Patterson, as defendants. Baptist News Global, an independent Baptist news outlet, reported that Southern Baptist leaders were mostly silent about the allegations.
Sex-abuse scandals in evangelical churches have been highlighted recently by Rachael Denhollander, the first woman to make allegations against sports physician Larry Nassar. Denhollander has since focused on speaking out about sexual-abuse allegations in Sovereign Grace Churches, a network of congregations mostly based across the United States.

When the Catholic sex-abuse scandals emerged in the United States, part of the larger outcry was how the church hierarchy was involved in covering up cases. In evangelical circles, where churches are often nondenominational or loosely connected to each other, the lack of hierarchy can cause a different set of problems, said Heath Carter, a professor of history at Valparaiso University.

“In the evangelical world, the independence of evangelical leaders and … lack of authority structure mean they can go on for a while and then explode when they come to light,” Carter said.

I for one hope that they keep on exploding and in the long run expose the hypocrisy and moral emptiness of evangelicals, especially their leadership which, as in the Catholic Church, care about three things: money, power and control over others.  Actually lhe Gospel message in the end means little or nothing.