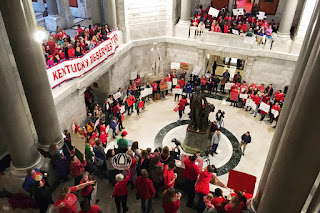 Red states have two main pillars of Republican Party governance: (i) slash taxes and governmental funding and (ii) prostitute yourself and the civil law to right wing Christian extremists. One area where these agendas merged was in slashing public school funding which satisfied the Christofascist party base's hatred of public education because - the horror! - it might educate students to the point where they might walk away from the brain dead, anti-knowledge worldview of the charlatans preaching from pulpits and/or television scamvagelists.  With the revolt that began in West Virginia - a state that is always the butt of jokes told by Virginians - seemingly now taking hold in other states, Republicans may find that they have awakened what may become a nightmare.  Just in time for the 2018 midterms and all of the state and local elections that piggy back with them.  The reality is that, if you value quality public schools - which are a key to maintaining property values and attracting new business and industry - you simply do not vote Republican. A piece in New York Magazine looks at the growing teacher unrest.  Here are highlights:

Eight Kentucky school districts — including those in Louisville and Lexington — are closed today as teachers stay home to protest the GOP legislature’s destructive “reforms” of their pension system. Oklahoma teachers are planning to strike on Monday despite winning a $6,100 pay raise. And Arizona teachers rallied at the state capital on Wednesday and are threatening to strike if their demands for major pay raises and restoration of education funding cuts are not met.

As this wave of unrest among teachers spreads nationally, it’s clear it has been inspired by the nine-day strike that won West Virginia teachers (and other state employees) a pay raise earlier this month. But there’s something more fundamental going on than copycat protests. We’re seeing a teacher-led backlash against years, and even decades, of Republican efforts at the state level to cut taxes and starve public investments. This is very clear in Oklahoma, where a quick pay raise the legislature passed this week is deemed by teachers to have missed the larger point: this investment alone will not undo a decade of neglect. There is still work to do to get this legislature to invest more in our classrooms. And that work will continue Monday, when educators descend on the capitol,” Alicia Priest, president of the Oklahoma Education Association, said in a Facebook video

The pay-raise bill signed by Governor Mary Fallin yesterday brought in $447 million in new revenues from higher taxes on cigarettes and oil-production facilities. But the teachers are demanding $3.3 billion “to restore millions of dollars in school funding that have been cut in the past decade. . . .

Similarly, in Arizona the teacher protests are not just about teacher pay, though they are among the lowest paid in the country. Their demands are much broader . . . . Teachers, who organized a grassroots campaign on social media, are demanding a 20 percent raise and restoration of school funding to 2008 levels, before the Great Recession struck, according to the Arizona Republic. They are also asking state lawmakers to stop cutting taxes until Arizona’s per-student spending reaches the national average.

[T]his collision is a reminder that GOP claims that tax cuts at the state as well as the federal level would pay for themselves by generating sustained economic growth have once again proved faulty, with public education being the primary victim of chronic budget shortfalls.

While Republican pols in Arizona and Oklahoma, like their counterparts in West Virginia, are backpedaling furiously and trying to prevent or resolve strikes, the conflict may go too deep for an easy resolution.

In Kentucky, teacher grievances are mostly focused on the pursuit by Republican governor Matt Bevin and the GOP legislature of another big conservative cause: public pension “reform,” which in this case meant serious reductions in benefits and a complete revocation of teacher pension security. That the “reform” was whipped through the legislature suddenly after being attached to a sewer regulation bill did not improve its aroma.

Perhaps the current wave of teacher protests and strikes will subside as the school year ends. But more likely, it will spill over into the election season this fall, when 36 governorships and most of the national state legislatures are up for grabs.

Come November, vote a straight Democrat ticket at every governmental level and send the GOP a strong message.
Posted by Michael-in-Norfolk at Saturday, March 31, 2018