March for Our Lives - Republicans Are Not Getting the Message 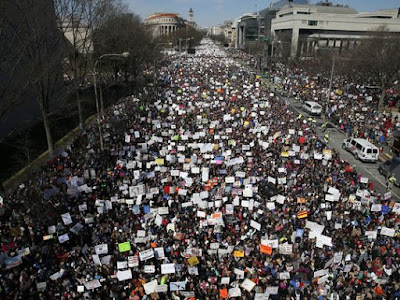 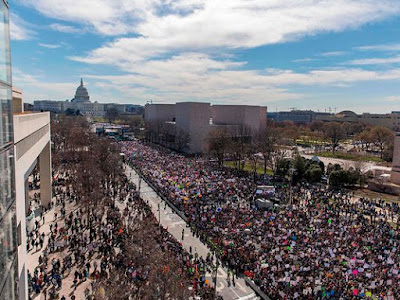 UPDATED:  Per The Hill, this batshitery from Rick Santorum:


By some estimates, the turn out for yesterday's "March for Our Lives" in Washington, D.C., was the largest protest march ever in the city's history (the crowd's certainly dwarfed the turn out for Der Trumpenführer's low attendance inauguration).  And that doesn't count those who turned out at sister marches in other major cities.  Having been a teen in the 1960's and college student in the early 1970's I identify with the idealism of the Parkland students and those they have inspired.  Things can change if enough pressure is applied, especially at the ballot box.  My generation saw the Vietnam War ended and Nixon removed from the White House. This new generation of youth have that advantage of the Internet and social media that allows them to organize and apply pressure in ways my generation only dreamed of.  What's interesting is watching the reactions of those most in the pocket of the gun lobby.  Most Republicans have remained silent and others have attacked the student activists.  The NRA increased its ad buys 600% since the Parkland massacre as noted by the Chicago Tribune:

Within four days, though, the NRA had returned in force, increasing its advertising aggressively on Facebook, and spending so widely and indiscriminately that its ads on YouTube showed up on videos for school-age kids. According to a previously unpublished review by Pathmatics, a company that scrapes data from online ads, the NRA spent more than six times as much on digital ads after the Parkland shooting than it did in the weeks before it. Its average daily spending in the 24 days before Parkland was $11,300, according to Pathmatics. In the 24 days after its silent period, that average jumped to $47,300.

Disgustingly, NRATV has mocked the students and shown, in my view, the growing depravity and moral bankruptcy of "conservatives" in general.  This from the Washington Post:

The latest attack came from Colion Noir, a host on NRATV who took to the airwaves on the eve of the Parkland teens-led March on Washington, telling them: “No one would know your names” if a student gunman hadn’t stormed into their school and killed three staff members and 14 students. . . . . Colion Noir is a pseudonym for Collins Iyare Idehen Jr., a lawyer and gun rights activist from Houston who has nearly 650,000 subscribers on YouTube.

Fox News, it typical form, has lied and mislead its gullible viewers on the positions of the activist students and, as noted before, helped spread the false meme that they were hired actors.  Anything rather than face the reality that people are fed up with what falsely styled "conservatives" and Republicans are doing to the country.

I sincerely hope that Millennials and those attaining voting age in time for the 2018 midterm elections will take the message of the Parkland activists and register to vote and get out to the polls and take out their anger on pro-gun candidates.  Here's a look at that message:

During today’s March For Our Lives rally in Washington, D.C., one of the Parkland students who has become an outspoken advocate for gun control spoke. And he used the speech to warn pro-gun politicians that the voters are coming for them.

Cameron Kasky began his address by telling the hundreds of thousands gathered “welcome to the revolution.” Stating that he’s been asked if he believes that “any change is going to come” following the tragic Marjory Stoneman Douglas shooting, he told the crowd to “look around” because “we are the change.”

“We must educate ourselves and start conversations that keep our country moving forward, and we will,” Kasky exclaimed to cheers. “We hereby promise to fix the broken system we’ve been forced into and create a better world for the generations to come. Don’t worry, we’ve got this.”

Kasky went on to state that the people of the country now “see past the lies” and the “corrupt aren’t controlling our story.”

After listing off the names of the victims of the Parkland shooting, Kasky noted that the march isn’t the “climax of this movement — it is the beginning.”

Let us hope this is truly a beginning of real change and the beginning of the end of Trump - who remained silent about the march - and today's GOP.
Posted by Michael-in-Norfolk at Sunday, March 25, 2018