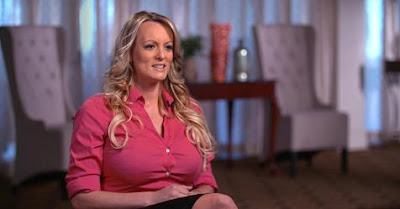 I, like I suspect many, I watched the 60 Minutes interview of Stormy Daniels last evening.  My take away?  Donald Trump is an adulterous pig.   In my view, a very unattractive adulterous pig.  Perhaps my favorite part of the interview was this:

I suspect that this exchange will most enrage Der Trumpenführer since it dismisses his delusional attractive image of himself.

On a more serious note, what the Daniels interview may do is further alienate women voters - a demographic with whom Trump does poorly - by reminding them of Trump and the GOP's anti-women agenda.  With the 2018 mid terms a little more than seven months away, the last thing Republicans need is more alienation of women voters or, in the alternative, energized women voters out for retribution.  A piece in CNN looks at why Republicans should be worried.  Here are excerpts:

But one way that the Daniels story could have a very real political effect is in its ability to further energize the women's vote, especially that of white college-educated females. From the start of his presidency, Trump has had a gender problem. Hillary Clinton won 54% of the women's vote. The first mass protest against his presidency, the Women's March on January 21, 2017, drew hundreds of thousands of women from all over the country.
The president has done nothing to allay the concerns that he is a sexist-in-chief who is dismissive of any policies that aim to achieve gender equity and who is prone to espousing the kind of "locker room talk," as he called it, that was on display in the infamous "Access Hollywood" tape that emerged during the election. While many Americans had been hopeful that Clinton's candidacy would signal a historic milestone in the fight for gender quality, the story turned out differently. The victory of Trump felt to many women like a huge step backward. In the period that has his followed his election, many women voters have only become more determined to reverse the damage that his victory caused. The #Metoo movement pushed the issue of sexual harassment to the front and center of our national conversation. Activists brought down numerous leading figures in key industries and have created immense pressure to transform the rules and norms of workplace behavior. The anger among women in the electorate could be decisive in the midterm elections. With a record-breaking number of female candidates running for office, many women are clearly determined to shake up Washington. If women voters who oppose President Trump turn out in large numbers, they can provide the key to electing a Democratic-controlled House and Senate. Ronald Brownstein has noted that 62% of college-educated women are planning to vote for Democrats in November. According to an NBC News/Wall Street poll, the president's favorability rating among college-educated white women has fallen from 32% to 27%. And the Republicans only receive positive marks from 23% of this pool. In the special elections in Virginia, Alabama, and Pennsylvania, the Republicans performed poorly with women voters. And [Trump's] the president's numbers have also fallen among blue-collar white women who were important to his victory last November. In RealClear Politics, David Brady and Brett Parker recently recounted how weak the enthusiasm is for his presidency among female voters, and the widening gender gap between the parties. Donald Trump has represented, both symbolically and in terms of the policy agenda, a reactionary presidency toward the feminist movement that has pushed the country toward greater gender equality. The daily tumult in the White House and Special Counsel Robert Mueller's investigation create woes for Trump. But the decisive factor that could put real institutional brakes on this [Trump] President may well turn out to be the women's vote.