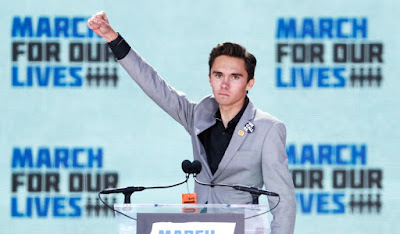 I find it very revealing to watch the behavior of so-called conservatives as they attack the student activists from Parkland, Florida as they work to spearhead pressure for the enactment of common sense gun control laws.   Much like the Christofascist who disseminate deliberate lies against LGBT individuals, we are now seeing fabricated photos and sound bites attacking Parkland students, especially Emma Gonzales and David Hogg.  The subtitle of a piece in The Guardian described the phenomenon well:

This is a fight between a young, diverse, feminist generation against an old, white, male minority desperate to hang on to power.

Yes, there is a strong racial component to the attacks on the Parkland students given that many have argued that  America's insane gun laws are really about maintaining white power, and white male power in particular.   A column in the Washington Post looks at the false and immoral attacks as does the piece in The Guardian referenced above.  First highlights from the Post column which notes that the usual haters on the right are furious that their usual tactics of personal destruction against their opponents are not having their usual effectiveness:

As an entirely new movement for gun reform is being driven by a group of smart, passionate and media-savvy Florida teenagers who survived one of America’s frequent mass shootings, many on the right are more than a little put out. The problem, as conservatives see it, is that the mainstream media have given these young people more attention and more credulous coverage than they deserve

But what really ticks conservatives off is that they themselves are feeling constrained from criticizing the Parkland students, because they are worried they will be criticized for attacking such sympathetic spokespeople. Not that some aren’t trying. Just in the last couple of days, we have seen two genuinely fake news stories about Parkland students go viral on the right, one in which involved a doctored photo of a student supposedly tearing up a copy of the Constitution, and another which falsely alleged that one of the students wasn’t on campus on the day of the shooting and had been lying about it. But even in the nonloony corners, the Parkland students are making people frustrated. Head over to the National Review’s website today, and you can find a bunch of articles about guns.  . . . . [one] the magazine’s editor Rich Lowry, is entitled “The Teenage Demagogues.” Lowry, after listing what he sees as rhetorical excesses from some of the students, gets to the heart of the matter: Maybe all of this can be written off as the work of overenthusiastic, under informed 17-year-olds. But the student activists aren’t acting alone. They are promoted and praised by adults who should know better. Since the kids serve a useful purpose in promoting gun control, though, it is practically forbidden in much of the media to dissent from anything they say.

“It is practically forbidden in much of the media to dissent from anything they say,” Lowry says, claiming for the right the status of noble victims, brutally silenced by a system that forbids them to speak their opinions out loud.

But is that true? Tell me: What opinion on the subject of guns has been declared verboten in the current American debate, never to pass the lips of a conservative lest he be banished from the media forever? The idea that we should be arming teachers, or the ludicrously false claim that more guns leads to less crime, or the belief that military-style rifles are awesome, or the notion that we have no gun problem that can’t be solved by bringing more guns into more places? Which of the policy changes advocated by the Parkland students — a ban on those military-style weapons, raising the age to purchase a rifle from 18 to 21, expanded background checks — may no one “dissent” from? Because I hear conservatives making all of these arguments on TV, on the radio, and online every single day.

Here’s the real difficulty the Parkland students present. It’s not that they’re passionate and surprisingly articulate for their age, though they are. It’s not that they’ve widened the conversation on guns by refusing to accept things the adults have taken as given for years, such as the idea that the NRA is simply too powerful to bother opposing, though they have. It’s that they’re too sympathetic. And when a spokesperson is sympathetic, when you attack them personally, you look like a jerk.

[W]hat conservatives are really mad about is that the tactic of demonizing those they disagree with — which is so common in contemporary political rhetoric  . . . .  has, in this case, been taken away from them.

You can say the Parkland kids are wrong, but calling them names, trying to dig into their personal lives to find something embarrassing, encouraging your audience to not simply think they’re mistaken but to hate them with all the venomous fire they can muster — that’s what some on the right wish they could do, but can’t, at least without looking like soulless ghouls.

The piece in The Guardian gets to the underlying motives of those on the right.  Here are excerpts:

We know that the gun debate is a culture war. But Haider and her sign reminded me that it’s more than an abstract debate over ideology or constitutional principles. It’s a fight between a young, diverse, feminist generation representing an emerging majority and an old, white, male minority desperate to hang on to power. And guns are their security blanket of choice. Just 3% of Americans own half of the guns in America. And that 3% isn’t just anyone. According to a Harvard study flagged by Scientific American this month, the person most likely to stockpile guns in this country is an older, white man from a rural conservative area. And an alarming body of research shows that they’re motivated by racial anxiety and a fear of emasculation. A 2017 Baylor University study, for example, found that men’s attachment to guns often stemmed from economic woes and fear of losing traditional “breadwinner” status. The researchers wrote that “engaging in fantasies about being an NRA ‘good guy’ who uses his gun to protect his family and community from the ‘bad guys’ was one way for men to reclaim that threatened masculinity.” And in 2015, researchers from the University of Chicago reported that racial resentment was a strong predictor of opposition to gun control; and that the more racist respondents were, the more steadfast that opposition was. There’s a long history of white male support for gun rights being connected to anger and fear over gains for women and people of color. That’s part of the reason that many of the most irate responses to recent young activists have skewed racist or misogynist. But while issues of race and gender confound and alarm those on the right, young activists are doing nuanced thinking to bolster their work on gun violence. This generation is calling out the hypocrisy of conservatives who abhor government interference unless it’s over women’s bodies, talking about how arming teachers would endanger students of color, and recognizing how white students are getting the support that young Black Lives Matter activists never did. The new America is made up of communication-savvy, digital natives. They’re not cowed easily, and they see through the arguments that may have stumped their forebears. . . . . A lot of us adults watching the march and the walkout felt hope for the first time in a long time, and not just because of the incredible signs. We saw a generation who is succeeding where we failed, an emerging new force that thinks differently and who is willing to take the power they democratically deserve.


Nothing frightens the far right more than smart, media savvy non-whites and whites who do not feel threatened by the skin color of others. and who embrace modernity rather than tribalism and Bronze Age beliefs.