America Is Hurtling Toward the Breaking Point 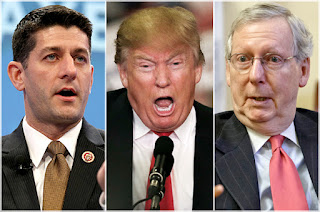 A piece in U.S. News & World Reports from a couple of months ago laid out a frightening reminder of how democracies die and draws parallels between Adolph Hitler and Donald Trump's attacks on the free press and independent media.  In both cases, claiming the press is lying and attacking news outlets is a key mechanism in duping an intellectually lazy and/or bigoted populace into giving up their civil rights.  Here are article highlights:

[Trump] and his advisers fomented Lugenpresse – the concept of "lying press" made famous by the Nazi party in Germany during Adolf Hitler's rise to power -- to undermine journalists covering his presidential campaign at every stop. Voters shrugged. Now, nearly a year into his administration, those efforts are bearing fruit. Nearly half the country believes the media lies and makes things up about him, calling into question their reliability on everything else as well. . . . . The process was accelerated by Facebook and Google, two companies that control information access for millions of people and allowed fake news to be presented, unfiltered, to voters around the country.

Social scientists long ago established an unfortunate truth about history: We are condemned to forget its most important lessons - and it can happen in just one generation. We are now witnessing this forgetfulness again in nation after nation. White privilege, anti-immigration fear and economic and national insecurity are upending political systems around the world with no end (yet) in sight.

We are now more than a generation away from Nazi Germany and the roots of the conflict that precipitated World War II. New generations have forgotten how and why the Nazi party rose to absolute authority in Germany. When we forget, what worked then will work again.

Today, in the U.S., we are just one nuclear confrontation away from becoming a nation where martial law and a military-controlled mass surveillance state will be viewed as a relief by many citizens. Destroying the media's credibility plays an important part in making that scenario a reality.

To put it very simply, there were five basic, highly effective moves that allowed Hitler's rise:

First, the Nazi party allowed a coarse, uneducated leader to rise to prominence on a white privilege, nationalist wave. Second, the conservative establishment party foolishly thought it could appease him by sharing power. Third, that same Nazi party destroyed media credibility to silence critics. Fourth, the Nazis literally burned the establishment congress to the ground. Fifth, it seized authoritarian power by using unchallenged propaganda to precipitate an existential threat allegedly emanating from those outside the white Aryan race and outside the nation's borders.

It is the third stage – destroying the credibility of the mainstream media -- – that's happening right now, and the Politico/Morning Consult poll shows it's working. Whether it continues to work in the next one, two or three years is still very much an open question . . . But if this third stage works, and if GOP leaders allow it to stand, then the fourth and fifth stages we saw in Nazi Germany aren't all that far behind.

The second half of successful propaganda – the "national education" of the people by the government, as Goebbels so accurately portrayed it - relies on a confluence and collaboration between the state and mass media that voters consume. When mass surveillance of the people successfully manages to deliver lies as truth directly to those willing to consume and believe such lies, then the circle is complete.

It is in the context of this disturbing phenomenon that a column in the Washington Post makes clear that America is hurtling towards the precipice and that a significant portion of the population is either oblivious to the danger - think soccer moms and those who say they ignore politics - or fueling its success by watching fake news outlets like Fox News and Breitbart.  Here are column highlights:

Can our government function normally when President Trump tweets about his “button” being bigger than that of an armed adversary? Can there be business as usual when the word “insane” is being applied with increasing frequency to his actions, and when one of his most loyal supporters has called a meeting between Russian operatives and Trump campaign officials “treasonous”?

Only a few days into the new year, there is a striking disconnect in the nation’s capital between the ordinary and the mind-boggling — between the sorts of transactions politicians routinely make to keep the country running and displays of the irrational, the abusive and the menacing emanating from the White House.

There has been an inclination over the past year in both politics and journalism to separate Trump’s tweets and other outbursts from the realities of governing. The idea is that his eruptions are either (a) largely irrelevant forms of his letting off steam or (b) signs of a brilliance beyond the comprehension of mere mortals. What looks to most of us like madness is cast as genius in setting up enemies, signaling his base or distracting us from one thing or another.

But we are past the time when we can believe any of this. Trump is, without question, doing enormous damage to the United States’ standing in the world, and his strategy for political survival is rooted in a willingness to destroy our institutions.

While the news on Wednesday understandably focused on Stephen K. Bannon’s treason comments in a new book by journalist Michael Wolff, 2018 has already produced two remarkable essays explaining the genuine threat the president poses to the nation’s foreign policy interests.

Susan Glasser, writing in Politico, offers frightening detail about how Trump’s stunning lack of knowledge and his indifference to his own obliviousness have led diplomats to label him “insane,” “catastrophic,” “terrifying,” “incompetent” and “dangerous.” Glasser concludes: “When it comes to Trump and the world, it’s not better than you think. It’s worse.”

And Evan Osnos’s carefully reported and much-discussed article in the New Yorker demonstrates how Trump’s policies — but also his pathological focus on himself, his ignorance, and his astonishing susceptibility to flattery — have profoundly weakened the United States’ position in Asia and played into Chinese President Xi Jinping’s reach for international power. . . . And its [a Chinese think tank] analysis uses a term from feudal China, “jiatianxia,” to define Trump’s approach. It means “to treat the state as your possession.”   This insight cuts to the heart of the peril the president represents to our democracy and the rule of law.

Directing the prosecution of political enemies is a habit of autocrats. As Benjamin Wittes, my Brookings Institution colleague, wrote recently, Trump is “normalizing for an entire political movement the politicization and weaponization of law enforcement and intelligence.” Is this the legacy the Republican Party wants? While we sit back and wait on special counsel Robert S. Mueller III to issue his findings, we pray that regular governance will be possible because there is no other choice.

Yet doing so means continuing to absorb Trump’s blows to our system and to our country’s influence around the globe. It also requires great faith in our capacity for restoration despite the readiness of the president’s allies to place his survival above the health of our polity.

[W]e must face the fact that Trump is accelerating us toward the breaking point. No matter how confident we are in our resilience, we should not imagine otherwise. Not even Mueller has a button on his desk he can press to get us out of this without scars.


Be very, very afraid.
Posted by Michael-in-Norfolk at Thursday, January 04, 2018