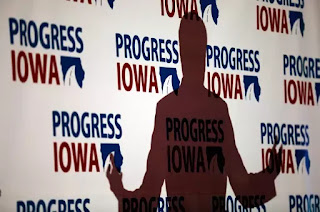 In many ways Iowa has been surprisingly progressive over the decades be it in public education, women having the right to vote or same sex marriage.  Yet, in 2016, all of that was thrown aside for Donald Trump who carried the state despite promises to seeks to dismantle public education, who is a self-confessed sexual predator and who promised to wage war against LGBT equality. Worse yet, he vowed to pull the USA out of NAFTA which would hit Iowa's agricultural industries extremely hard. Now, as the Washington Post reports, Trump's approval rating in Iowa is in the toilet and the public mood has appeared to shift against Republicans.  Perhaps Iowa voters have discovered that while Trump's calls to racism made them feel good about themselves (the state is over 93% white) as perhaps did his fraudulent calls to support "family values," the true GOP agenda of taking from the 99% to give to the 1% doesn't treat them all that well. Indeed, Democrats are optimistic that the newly passed Trump/GOP tax bill will give them plenty of fodder to run on in November, 2018, and in state elections. Here are article highlights:

Iowa has seemingly soured on the president and his party. The end-of-year Iowa Poll, an industry standard conducted by Des Moines-based Selzer and Co., found Trump with just 35 percent approval in the state. Only 34 percent of Iowans said they would back Republicans for Congress in 2018, and 61 percent said they were turned off by politics altogether.

The discrepancy between the rosy economic picture and the public’s distaste for Trump in Iowa has confounded both parties and complicated one of the major political stories of the decade — the Republican romp through the Midwest.

Why Iowa has turned against Trump and Republicans is a mystery that both parties are eager to figure out ahead of the 2018 midterms, looking to understand whether it’s an aberration or a sign of a greater political trend.

Republicans took charge of Iowa’s legislature last January and since then have advanced the agenda they promised voters — pushing through tax cuts, passing labor rules that require unions to hold fresh elections and maintaining a privatized version of the Affordable Care Act’s Medicaid expansion.

Some conservatives saw it as a strong start and suggested polling that showed dark voter moods about Republican governance reflected a cynicism that would fade as the policies took effect.

A swing state for decades, Iowa broke so dramatically in 2016 that Democrats wondered if it had become a demographic write-off. Thirty-one of Iowa’s 99 counties voted for Barack Obama twice, then flipped in 2016 to support Donald Trump.

For the first half of the year, Democrats looked at Iowa as a cautionary tale. White voters without college degrees had wiped the party out in the eastern part of the state, where it had always won strong. National groups had tied Rep. Rod Blum (R) to Trump, expecting a wipeout in a district that had voted for Obama by 14 points in 2012. But Trump won the district, and Blum, a member of the House Freedom Caucus, became a reliable voter for his agenda.

Now, Iowa Democrats believe they’ve begun the climb back. On Jan. 31, the party easily held a state House seat in the first special election of the Trump era. On Aug. 8, it did the same, but in a southeast Iowa district where Trump had won by 21.3 points. And on Dec. 12, when most national political attention was focused on Alabama, Democrats lost a special state Senate race in red northwest Iowa by nine points. The seat had been so safely Republican that Democrats had not run a candidate in 2010 or 2014.

Jeff Kaufmann, the Iowa GOP chairman who has presided over the Republican surge, did not sugarcoat the matter. . . . .  “I see that Senate race as a wake-up call."

In Iowa, Trump’s trade protectionism was a risk and came during a slump for farmers who depend on open markets. Longtime governor Terry Branstad (R) left Des Moines to become the administration’s ambassador to China, and his successor, Gov. Kim Reynolds (R), has found herself lobbying the administration to go slow on changes to trade policy.

“Whenever we talk about pulling out [of NAFTA], commodity prices are affected immediately, and that will be one of the first casualties that we’ll see,” Reynolds said at a Dec. 19 news conference. “So we’re going to hold them accountable.”

Democrats talked confidently about running against the just-passed tax cut. It was, they said, going to sail right past the sort of Iowans who had trusted the GOP the previous year.

“They’re going to see who the winners and losers are in this, and they’re going to identify the corporations and wealthy people who came out way ahead of their families,” said Nate Boulton, a state senator who is running for governor in 2018.

One can only hope the Iowa Democrats field quality candidates in every race and replicate the ground game that proved so effective in Virginia.

Posted by Michael-in-Norfolk at Tuesday, January 02, 2018