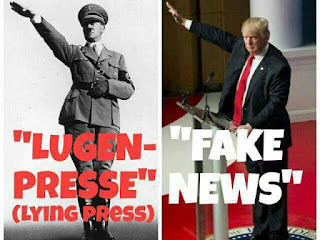 As the new year, 2018, begins, it is essential that Americans (i) recognize the gathering storm that the Trump/Pence regime pose to America and the world, and (ii) that it is critical to the future of the country that those who honor the U.S. Constitution - and I would argue, common decency and even a shred of the Gospel message - come together and do all that they can to put an end to the attacks on American institutions and sending a resounding  "enough!" to Der Trumpenführer and his Republican enablers and apologists.  Two columns in the Washington Post look at the immense danger that Trump/Pence poses to the nation and the need to put aside intra-party bickering to build an ironclad resistance to the toxic threat that Trump/Pence embody. One aptly quotes Winston Churchill on what lies ahead and must be thwarted.  Here are excerpts from the first column:

A storm is gathering, and there is every reason to believe that 2018 will be the most consequential political year of our lives.

The reckoning upon us follows a year mercifully drawing to a close this weekend. Over that horrid year, President Trump has questioned the legitimacy of federal judges, used Stalinist barbs to attack the free press and cast contempt on the rule of law, while his campaign manager, his national security adviserand a foreign policy aide have been marched into federal courts. Those anti-democratic instincts were made all the more ominous by his praising of autocrats across the world as they were ruthlessly consolidating power in countries such as Russia, China and the Philippines.

It is difficult to pinpoint the nadir for a man [Trump] who has savaged Mexicans, Muslims and Gold Star mothers while fat-shaming beauty queens and face-shaming female news hosts . . . . . But the low moment in this presidency may have occurred four months ago, when Trump claimed a moral equivalency between neo-Nazis and those standing against them. Or perhaps it was three weeks ago, when the president told Americans to vote for an accused child molester who had called our country the focus of evil in the modern world and once suggested opposition to the constitutional amendments that ended slavery and gave women the right to vote.
World leaders continue to watch dumbstruck as the United States retreats from organizations that were created following the allies’ victory over Hitler. Those same alliances that Trump now undermines with reckless tweets and discarded treaties carried the United States to victory in the Cold War. But this is a White House that heaps contempt on history. And so, America’s dangerous retreat from the world continues.

“On the morrow of the Republican success isolationist conceptions prevailed,” Winston Churchill wrote in “The Gathering Storm.” The British prime minister believed Hitler’s rise proved, above all else, “how absolute is the need of a broad path of international action pursued by many states in common across the years, irrespective of the ebb and flow of national politics.” But this president is ripping apart the carefully woven fabric of U.S. foreign policy that bound administrations together from Franklin D. Roosevelt to Ronald Reagan to Barack Obama, and across the American century.

Churchill’s ominous warnings to future generations will be more relevant to 2018 than at any time since it was written in the years after World War II.

While Trump’s eroding of U.S. prestige across the globe is disturbing, it is his administration’s undermining of democratic values that poses an even greater threat to our Constitution and country. Borrowing again from Churchill, America’s constitutional norms tremble in the balance as Trump unleashes furious attacks on First Amendment protections, independent counsels and law enforcement officers who refuse to be bullied. While the framers of the Constitution foresaw the possibility of a tyrannical president, they never let their imaginations be darkened by the possibility of a compliant Congress. The storm is gathering. And how we respond in the months ahead may determine our fate for years to come.

The second column calls on all true patriots to put aside differences and confront the malignant threat posed by the Trump/Pence regime and those Republicans who defend it or act as sycophants.  Here are excerpts:

In 2018, Trump’s abuses of power, his indifference to truth and his autocratic habits will be the central issues in our politics. Nothing else comes close.

This means there is no more vital business than containing Trump and, if circumstances demand it, removing him from office. This applies not only to progressives and liberals but also to everyone else, from left to right, who would defend our democratic values and republican institutions.

This may sound obvious, but it’s not. Among Democrats, there are often irresistible temptations to fight internal battles in preparation for 2020: Clinton people vs. Bernie people, the center-left vs. the left, the market-friendlies vs. the social democrats and democratic socialists. . . . . they are not the most important thing. With special counsel Robert S. Mueller III’s investigation under constant threat from Trump’s apologists, solidarity among his opponents is imperative. This is all the more pressing in the face of the Republican leadership’s shameful cowering before a president who is perpetually in search of loyalty and sycophantic praise.
[T]his is a year of midterm elections, not a contest for the presidency. Voters typically use off-year ballots to render a judgment on a president’s course, particularly when they are unhappy — think 2006, 2010 and 2014. The most effective midterm slogan ever was the GOP’s 1946 plea: “Had Enough? Vote Republican.” With a change in the last word, it would fit the current anti-Trump mood well.

Trump, not some ingenious new policy, will be the issue on voters’ minds, and opposition to him will be the most powerful force pushing voters to the polls. Yes, progressives should talk about Trump policies they would try to check or roll back — beginning with the GOP’s egregious tax giveaway — and work to make their ideas on health care, jobs, infrastructure, the environment and education more persuasive. But the point of 2018 is to meet the emergency this presidency has created.

Let’s not shilly-shally about this. To truly check Trump, Democrats will need to win elections in usually unfriendly territory. As my loyally Republican Post colleague Michael Gerson wrote recently, Republican politicians will abandon Trump only “if they see it as in their self-interest.” For this to happen, they will have “to watch a considerable number of their fellow Republicans lose.”
Many progressive positions on matters from health care and family leave to fairer taxation and workers’ rights are widely popular. The fact that revulsion over Trump has shaken loose many normally Republican voters can be embraced as an opportunity for dialogue and persuasion.
What deserves rebuke is the obsequiousness of the current Republican political leadership toward Trump as well as the indifference of the president’s protectors to the rule of law. Their willingness to pile falsehood upon falsehood in his defense amounts to a war on the basic requirements of reasoned debate in a free society.
Friends of republican democracy are called upon to set aside their differences to resist the corruption of presidential authority, to stand up for truth,and to insist that Trump be held accountable.
The priority of 2018 is for our nation to rise up and say: Enough.