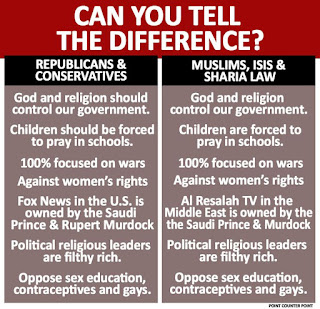 Pink News is reporting that the Islamic executioner responsible for having numerous men suspected of being gay thrown from rooftops of tall buildings has been captured by Iraqi security forces.  These horrific murders were motivated by ISIS' selective reading of the Koran which is not consistent with Islam during its golden age.  Back here in America, Right Wing Watch ("RWW") is reporting on the efforts of self-style fundamentalist Christian "leaders" to “re-horrify society about the sin of homosexuality."  Like their Islamic extremists counterparts, this effort is based on a selective reading of the Bible which transforms the Bible into a message of hatred.  Indeed, the only difference between the two groups is the degree of violence - at least so far - the "Christians" are willing to use against gay individuals.  As is the norm with these "Christians" mentioned by RWW, neither Linda Harvey nor Peter LaBarbera - both of who I have had email debates with in the past - have any legitimate credentials to qualify them as experts on sexuality, mental health or medical issues.  Both merely set up "ministries" that allow them to shrill for money while disseminating hatred.   Here are highlights from the Pink News piece:

Security forces in Iraq have captured a ISIS executioner who was notorious for homophobic murders.  Thousands of LGBT people have been displaced in Iraq and Syria, as the terrorist group known as ISIS (Islamic State of Iraq and Syria) continues to actively target and execute gay men. ﻿

The terrorist group has taunted the West with a string of  ‘death to gays’ execution videos, showing men accused of homosexuality being thrown off buildings and pelted with stones.

One of the ISIS executioners who most aggressively targeted gay people was captured this week.  Abu Omer, a senior jihadi executioner known as ‘White Beard’, had ruled the city of Mosul with an iron fist until the city was retaken by security forces last year.  . . . . according to The Times, he was arrested on January 1 after officials were tipped off about his hiding place in the city.

Among the vicious attacks: ISIL has tied nooses around these men’s necks and dragged them behind trucks, burned them alive, thrown them off buildings and stoned them to death.

The report states: “ISIL has unleashed a reign of terror against civilians and vulnerable minorities living in areas it has seized, including barbarous violence against LGBTQ people.  “ISIL’s extreme ideology is interpreted by its followers to require the death penalty for those who engage in sexual relations outside of heterosexual marriage, including same-sex sexual relations.”

Turning to the Right Wing Watch article, note how these parasitic American Taliban members repeat the lie that gays are sexual predators (most are, in fact, heterosexual men):

On a recent episode of her “Mission America” radio show, Linda Harvey interviewed fellow anti-LGBTQ activist Peter LaBarbera of Americans for Truth About Homosexuality about the importance of working to “re-horrify” society about the sin of homosexuality.

The two lamented that homosexuality is now widely accepted in America, with Harvey voicing her alarm that it is even welcomed in public schools where “predators” are allowed to use LGBTQ clubs to target children for recruitment.

“So many of these groups are predators,” she said. “I believe that the homosexual clubs in schools are just red flags for predators. I think that they exist there as an audience to continue to fast track kids into the lifestyle, network with adults—I mean, who knows what goes on there.”

“How do we re-horrify people about the sin of homosexuality?” she wondered. “People are becoming so comfortable with this, even people on our side. We need to re-horrify them.”

From my past interactions with both Harvey and LaBarbera, in my opinion, they are mentally unbalanced and might benefit from a mental health intervention.
Posted by Michael-in-Norfolk at Friday, January 05, 2018

Email ThisBlogThis!Share to TwitterShare to FacebookShare to Pinterest
Labels: anti-gay animus, Bible as justification for evil, fundamentalist Christians, Islamic Extremists, Koran as a message of hate, Linda Harvey, murder of gays, Peter LaBarbera, religion as a message of hate