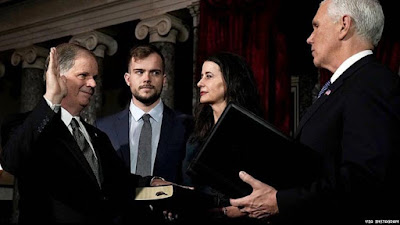 One of the ironies of the Alabama special election last month in Alabama is that not only does Alabama now have a Democrat in the U.S. Senate, but that new senator has an openly gay son, something Roy Moore attacked Doug Jones on repeatedly.  At his father's swearing in ceremony, Jones' son attended and stared down Mike Pence, a virulently homophobic individual who has done all in his power to harm LGBT citizens throughout his political career.   The Advocate looks at the confrontation:

In a triumphant turn of events last month, voters elected Democrat Doug Jones to the U.S. Senate seat in Alabama over accused sexual predator and known homophobe Roy Moore. Shortly after the win, Jones’s son — Carson Jones — who at the time said he “couldn’t be prouder” of his dad, confirmed to The Advocate that he's gay.

On Wednesday, Carson Jones stood side-by-side with his dad as his father took the Senate oath of office, administered by virulently homophobic VP Mike Pence.  Shortly after, Carson Jones, who goes by TheDapperZookeeperon his Instagram page — which includes celebratory photos of the day his father won the election, Pride photos, and a picture of him meeting Lance Bass at a gay bar — posted a photo at the oath-taking in which he appears to be staring pointedly at Pence.

As for Pence's history of anti-LGBT actions, Towleroad has this:

Pence, as his record shows, is no friend to the LGBTQ community.

In 2000 during his first successful run for Congress, Pence said that he was in favor of sending money allocated to care for people with HIV/AIDS to organizations that provide conversion therapy.

From running a think-tank that published virulently anti-gay articles, to attempting to divert HIV/AIDS money to fund conversion therapy, to refusing to protect LGBT Hoosiers from discrimination, to legalizing anti-LGBT discrimination in Indiana, to cozying up to notorious homophobes, to supporting a ban on gay marriage, and decrying the ‘mainstreaming of homosexuality in the military’ after DADT was repealed, Pence’s record is among the worst records on LGBTQ issues of anyone who has ever occupied the office of the Vice President.