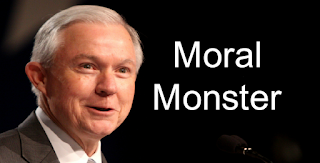 As previous posts have indicated, in my opinion Attorney General Jeff Sessions is an avowed racist despite his protests to the contrary.  Having known the man since the days we were both in Mobile, Alabama (I lived there when Sessions refused to prosecute KKK members who lynched a young black man), Sessions will do anything he can to keep blacks - and gays for that matter - second class citizens.  Moreover, he supports any policy that will help to disproportionately disenfranchise black Americans.  Hence the news that Sessions plans to enforce antiquated federal marijuana laws even in states that have legalized and regulate the sale and possession of small amounts for personal use.  The move comes just as Der Trumpenführer has disbanded his committee to investigate non-existent voter fraud which many believed was a thinly veiled effort to disenfranchise minorities and the poor.  Apparently what could not be accomplished by Trump's farcical committee will now be accomplished through marijuana prosecutions. Politico looks at Sessions' disingenuous move.  Here are excerpts:

Attorney General Jeff Sessions is rescinding the Obama-era policy that had paved the way for legalized marijuana to flourish in states across the country, two people with knowledge of the decision told The Associated Press. Sessions will instead let federal prosecutors where pot is legal decide how aggressively to enforce federal marijuana law, the people said.

The move by President Donald Trump's attorney general likely will add to confusion about whether it's OK to grow, buy or use marijuana in states where pot is legal, since long-standing federal law prohibits it. It comes days after pot shops opened in California, launching what is expected to become the world's largest market for legal recreational marijuana and as polls show a solid majority of Americans believe the drug should be legal.

Sessions, who has assailed marijuana as comparable to heroin and has blamed it for spikes in violence, had been expected to ramp up enforcement. Pot advocates argue that legalizing the drug eliminates the need for a black market and would likely reduce violence, since criminals would no longer control the marijuana trade.

The Obama administration in 2013 announced it would not stand in the way of states that legalize marijuana, so long as officials acted to keep it from migrating to places where it remained outlawed and out of the hands of criminal gangs and children.

The pot business has since become a sophisticated, multimillion-dollar industry that helps fund schools, educational programs and law enforcement. Eight states and the District of Columbia have legalized marijuana for recreational use, and California's sales alone are projected to bring in $1 billion annually in tax revenue within several years.

Sessions' policy will let U.S. attorneys across the country decide what kinds of federal resources to devote to marijuana enforcement based on what they see as priorities in their districts, the people familiar with the decision said.

The change also reflects yet another way in which Sessions, who served as a federal prosecutor at the height of the drug war in Mobile, Alabama, has reversed Obama-era criminal justice policies that aimed to ease overcrowding in federal prisons and contributed to a rethinking of how drug criminals were prosecuted and sentenced. While his Democratic predecessor Eric Holder told federal prosecutors to avoid seeking long mandatory minimum sentences when charging certain lower level drug offenders, for example, Sessions issued an order demanding the opposite, telling them to pursue the most serious charges possible against most suspects.

Sit in criminal court any morning and you will witness white defendants with money getting off or light sentences for marijuana possession while poor blacks without resources to hire a private attorney get slammed and receive sentences that put them in prison and deprive them of the right to vote.  Sessions knows what he is doing and it is disgusting.  He might as well wear KKK robes while on the job.
Posted by Michael-in-Norfolk at Thursday, January 04, 2018