2018: Exposing the Ignorance and Bigotry of the Trump/GOP Base 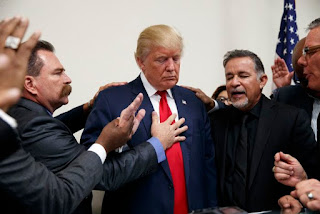 In addition to resisting the efforts of Donald Trump and a complicit Republican Party to destroy America's democratic norms and normalize the reprehensible, it is crucial that the majority of Americans expose the ugliness of the Trump/GOP base of support and truly turn these people into social outcasts.  They cannot be given a free pass and no longer out of politeness can their lies and fantasy world go unchallenged.  "Good Germans" allowed Hitler and his reign of horrors to occur just as too many "good Americans" and "good Christians" are allowing Trump and his toxic base, a majority of whom are evangelicals, to cause tremendous harm to the country and the lives of a growing number of its citizens.  The feelings of these people need to be hurt and their batshitery put on display and challenged relentlessly, both at the ballot box and in daily interactions. This should be the New Year's resolution of thinking and decent Americans.  A blogger friend looked at this urgent need as 2017 came to an end.  Here are excerpts of his review of this toxic base of Trump/GOP support:

There is something grossly out-of-kilter when a fundraising advertisement ends with the words “Thank you, President Trump, for letting us say, ‘merry Christmas’ again” and the insult passes with scarce public remark and is quickly forgotten because it’s buried beneath other lies and insults. It is time to stop indulging ignorant fantasists, to stop pretending they have something to say, and that it deserves respect. It does not.

Resolute ignorance — faith — is not a virtue, but an inexhaustible engine of harm. When a Holy Man urges you to accept implausible and downright garish claims on ‘faith,’ and in the service of faith to commit harms against others (Leviticus’ teachings about sexuality, for instance), he summons you to intellectual dishonesty and serves only some combination of his own insecurities and avarice. . . .   The final word on the subject must be given to Friedrich Nietzsche: “A casual stroll through the lunatic asylum shows that faith does not prove anything.”

Biological evolution by natural selection is real; it really happened, and it is still happening.  . . . .  Genesis is wrong, and we who have done the hard work of understanding that are tired of you who won’t — and really tired of your relentless subversion of public education. Go away.

David Barton [a favorite among Christofascists] is not a historian; he is a whore who specializes in servicing ignoramuses. America was founded by Enlightenment thinkers who meant to break the long train of bloodshed and ruin at the hands of the churches; it’s right in the Declaration of Independence:

We hold these truths to be self-evident, that all men are created equal, that they are endowed by their Creator with certain unalienable Rights, that among these are Life, Liberty and the pursuit of Happiness. — That to secure these rights, Governments are instituted among men, deriving their just powers from the consent of the governed, . . .

We the People of the United States, in Order to form a more perfect Union, establish Justice, insure domestic Tranquility, provide for the common defense, promote the general Welfare, and secure the Blessings of Liberty to ourselves and our Posterity, do ordain and establish this Constitution for the United States of America.

The Founders could not have been plainer: They intended a country of thinking men and women who decide for themselves how their affairs shall be organized. It is a national disgrace that an incandescent theocrat like Roy Moore, a plain enemy of America’s foundational ideals, nearly assumed a seat in the Senate.

All of this nonsense must be confronted where and when it is encountered, and drowned in ridicule and ignominy; after all, it is the morons who don’t know these things who have handed the country over to an authoritarian proto-fascist who thinks our Constitution is a bother. 2018 will be the decisive year; it we won’t fight for our country, we will lose it.

Let all of join in the fight to take back America from the theocrats and racist and the liars in the White House and and the ranks of congressional Republicans who are destroying the nation and trashing the founding ideals of the nation.
Posted by Michael-in-Norfolk at Monday, January 01, 2018