Trump's Republican Sycophants on the Potomac 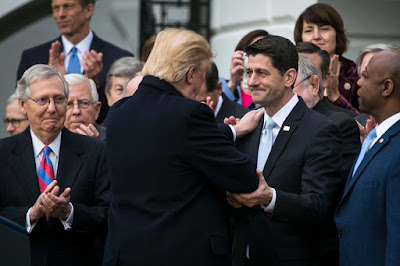 For years now I have argued that the only way to reform the Republican Party is through massive electoral defeats.  Anyone talking about "reform from within" is clearly delusional.  Now, with the Republican Party's "dear leader" in an apparent mental meltdown (based on his unhinged Twitter rants) over the rapidly selling book, "Fire & Fury," it is far past time to hold Republicans, especially those in Congress, accountable for their betrayal of the nation and their efforts to cover up for and normalize perhaps the most abhorrent individual to ever occupy the White House.  Thankfully, November, 2018, may provide an opportunity to inflict such an accounting.

It is also important to be mindful that, while their behavior is disgusting - for some it is now approaching efforts to obstruct justice - what is just as vile is the motivation behind their efforts: to further enrich the 1% and large corporations at the expense of everyone else and perhaps the nation's democracy itself.  Even former Trump critics like Lindsey Graham, a/k/a the Palmetto Queen, have sold out the country (in Graham's case, more and more suspect he is being blackmailed either by Trump or the Russians who may have gleaned damaging information from his hacked emails).  A column in the New York Times takes these individuals and the GOP as a whole to task for the betrayal of the country and one might argue, morality and decency.  Here are highlights:

I haven’t yet read Wolff’s book – do I really have to? — but the basic outlines of his story have long been familiar and uncontroversial to anyone with open eyes. Trump is morally and intellectually incapable of being president. He has also exploited his office for personal gain, obstructed justice, and colluded with a hostile foreign power. Everyone who doesn’t get their news from Fox has basically known this for a while, although Wolff helps focus our minds on the subject.

It seems to me that that the real news now is the way Republicans in Congress are dealing with this national nightmare: rather than distancing themselves from Trump, they’re doubling down on their support and, in particular, on their efforts to cover for his defects and crimes. Remember when Paul Ryan was the "Serious, Honest Conservative?" . . . .Now he’s backing Devin Nunes in his efforts to help the Trump coverup.

As Brian Beutler says, Republicans have become the Grand Obstruction Party. Why?

The answer, I think, is that the cynical bargain that has been the basis of Republican strategy since Reagan has now turned into a moral trap. And as far as we can tell, no elected Republican – not one – has the strength of character to even attempt an escape.

The cynical bargain I’m talking about, of course, was the decision to exploit racism to advance a right-wing economic agenda. Talk about welfare queens driving Cadillacs, then slash income taxes. Do Willie Horton, then undermine antitrust. Tout your law and order credentials, then block health care.

For more than a generation, the Republican establishment was able to keep this bait-and-switch under control: racism was deployed to win elections, then was muted afterwards, partly to preserve plausible deniability, partly to focus on the real priority of enriching the one percent. But with Trump they lost control: the base wanted someone who was blatantly racist and wouldn’t pretend to be anything else. And that’s what they got, with corruption, incompetence, and treason on the side.

They knew what Trump was, but were willing to overlook it as long as they could push their usual agenda. . . . Trump didn’t even hesitate about abandoning all his campaign promises and going all in for cutting taxes on the rich while slashing benefits for the poor.

Early on, some speculated that this would be a temporary alliance – that establishment Republicans would use Trump to get what they wanted, then turn on him. But it’s now clear that won’t happen. Trump has exceeded everyone’s worst expectations, yet Republicans, far from cutting him loose, are tying themselves even more closely to his fate. Why?

The answer, I’d argue, is that they’re stuck. They knowingly made a deal with the devil, and can’t back out.

More specifically, Trump’s very awfulness means that if he falls, the whole party will fall with him. . . . when the corruption is big time, and it’s combined with obstruction of justice and collaboration with Putin, nobody will notice which Republicans were a bit less involved, a bit less obsequious, than others. If Trump sinks, he’ll create a vortex that sucks down everyone involved.

What this means, among other things, is that expecting the GOP to exercise any oversight or constrain Trump in any way is just foolish at this point. Massive electoral defeat – massive enough to overwhelm gerrymandering and other structural advantages of the right – is the only way out.

Every American who cares about this nation and its future needs to begin working - and do so daily - to make sure that the 2018 midterms are a historic bloodbath for the Republican Party. Volunteer to help build a massive grassroots effort to get every voter possible to the polls to make sure the GOP loses control of the House, Senate and as many state houses and state legislatures as possible.  Virginia and the Alabama special election have shown that this is possible.
Posted by Michael-in-Norfolk at Saturday, January 06, 2018