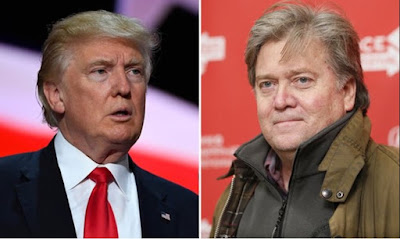 Michael Wolff's new upcoming book, Fire and Fury: Inside the Trump White House, based on interviews with many in Donald Trump's inner circle, details the intrigue, in-fighting, and all-around chaos that swirled around both Trump’s election campaign and his first year in the White House.  The first excerpts of the book have been leaked to The Guardian. Subsequently, New York Magazine published an even more substantive portions of the book that contains numerous bombshells that will be embarrassing at best for Trump supporters and Republican apologists. For the morally bankrupt evangelical Christians who have continued to support Trump, the expose passages on how Trump liked to entrap the husbands and ruin the marriages of women with whom he wanted to have sex (see the image below) underscore that these people have no standing to lecture anyone on morality or anything else.  Two columns in the Washington Post and a piece in Raw Story that catalogs the ten largest bombshells make it painfully clear that Trump is unfit for office and is a danger to the nation.  Take the time to read the Raw Story piece.   The first column in the post by a conservative columnist who makes it clear that none of these bombshells should be surprising.  Here are excerpts:

As excerpts from Michael Wolff’s “Fire and Fury” dribble out, the argument in favor of using the 25th Amendment may improve:

Here, arguably, was the central issue of the Trump presidency, informing every aspect of Trumpian policy and leadership: He didn’t process information in any conventional sense. He didn’t read. He didn’t really even skim. Some believed that for all practical purposes he was no more than semi-­literate. He trusted his own expertise ­— no matter how paltry or irrelevant — more than anyone else’s. He was often confident, but he was just as often paralyzed, less a savant than a figure of sputtering and dangerous insecurities, whose instinctive response was to lash out and behave as if his gut, however confused, was in fact in some clear and forceful way telling him what to do. It was, said [former deputy chief of staff Katie] Walsh, “like trying to figure out what a child wants.”

This is as troubling as it is unsurprising. For a couple of years, it has been apparent to anyone who cared to look hard that Trump was never mentally, emotionally or temperamentally fit to be president. Those who argued that character didn’t matter were both wrong and missing the point. Sanity matters. The book — at least from the excerpts — confirms what dogged opponents of his presidency have always said: He’s an unhinged man-child utterly lacking in the skill needed to be president.

[T]he book is utterly humiliating for the enablers, the deniers, the Trump-whisperers, the right-wing media and ultimately the voters who put this character in the Oval Office.

Willful denial explains part of it. But what’s the excuse, now that they know who he is, for allowing him to stay? The book should also inform how the press interviews him. We know he’s unhinged, so acting as his stenographer is not elucidating. Seeing what he knows, how much of a grasp of details he commands, how he reacts when challenged and the degree to which his short-term memory may be off is, it seems, where we should direct our attention.

One of Trump's defenders is Senator Lindsey Graham who once upon a time was a severe critic.  Why the change in course for Graham?  The whispers I have heard suggest that Trump may have the goods to "out" Graham as gay which would not go over well with the knuckle draggers in the South Carolina GOP base.

The second Washington Post column gets to the issue made famous by the Watergate investigations: what did the president [Trump] know, and when did he know it.?  Here are relevant highlights:

While President Trump’s allies often seem to be striking out randomly in all directions when defending him on the topic of Russia, the underlying theme of their arguments is that the whole scandal is, as the president himself often says, phony, made up, a hoax, fake news. Over time, this claim has grown weaker and weaker.

Two items released today show how much harder it’s going to get for them, because they cast light on a Trump campaign acting like it knew it was doing something wrong.

The first and more colorful one comes from the Guardian, which obtained a copy of a soon-to-be-released book by Michael Wolff based on extensive interviews with Trump associates. Unlike most Trump allies, Stephen K. Bannon makes no excuses for the meeting that Donald Trump Jr., Jared Kushner and campaign chairman Paul Manafort had in June 2016 with a group of Russians who had offered up damaging information on Hillary Clinton:
The meeting was revealed by the New York Times in July last year, prompting Trump Jr to say no consequential material was produced. Soon after, Wolff writes, Bannon remarked mockingly: “The three senior guys in the campaign thought it was a good idea to meet with a foreign government inside Trump Tower in the conference room on the 25th floor – with no lawyers. They didn’t have any lawyers.

“Even if you thought that this was not treasonous, or unpatriotic, or bad s–t, and I happen to think it’s all of that, you should have called the FBI immediately.”

Bannon hasn’t confirmed or denied that he said that rather explosive thing to Wolff, although Breitbart, the website he runs, has reprinted that excerpt without objection.  . . . . Bannon also seemed to believe the scandal was going to get much bigger — and keep in mind, he was telling Wolff these things last summer.

Bannon also identifies money laundering as a key area of vulnerability for the Trump family, which is indeed one of the prime areas of focus for special counsel Robert S. Mueller III’s investigation. When they start asking about money, “They’re going to crack Don Junior like an egg on national TV,” Bannon told Wolff.

If Papadopoulos was blabbing about what he had learned [about Clinton emails stolen by Russian intelligence] to an Australian diplomat, the chances he hadn’t told his superiors on the Trump campaign (whom he was obviously desperate to impress) are probably close to zero. . . . If he did tell his superiors, that would mean the Trump campaign learned Russia was hacking Democrats as early as April 2016 and didn’t inform the FBI. Nor did the campaign inform the FBI in June 2016 when Russians who had been presented to them as representing the Kremlin asked for a meeting to pass on damaging information on Hillary Clinton.

If you’re a Trump partisan, you might explain the campaign’s behavior with the ignorance defense: Perhaps they were so stupid and naive that they didn’t realize there was a problem seeking help in their campaign from a hostile foreign government. Or you might argue, as some have, that because there is no specific crime called “collusion” (even though collusion with Russia very well may have violated one or more of a number of statutes), the campaign did nothing wrong and therefore there was no need to alert the authorities about what Russia was attempting.

The trouble is that when the story of the Kushner/Trump Jr./Manafort meeting broke in the press in June 2017, the president and those closest to him attempted to cover it up. President Trump personally dictated an absurdly misleading statement for Trump Jr. to release to the press . . . . The coming Trump/Bannon feud should be entertaining, but to wrap this all up, I’ll refer you to something else Bannon told Michael Wolff, about the meeting with the Russians:

“The chance that Don Jr. did not walk these jumos up to his father’s office on the twenty-sixth floor is zero.”

Bannon is guessing here, because he wasn’t there at the time. And he could be wrong. But it’s hard to believe that Trump Jr., who expressed his excitement about meeting the Russians, wouldn’t have kept his father abreast of developments. That matters a great deal, because in the end the most important political question will be the old one from Watergate: What did the president know, and when did he know it?

We don’t know the answer yet, and I’m pretty sure President Trump is hoping we never find out. 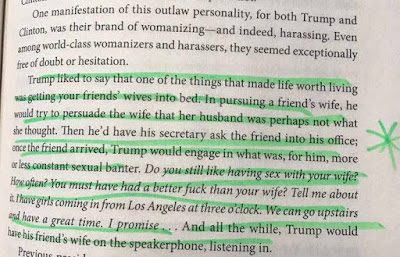 Posted by Michael-in-Norfolk at Wednesday, January 03, 2018