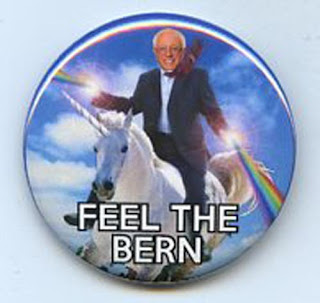 Bernie Sanders edged out Hillary Clinton in the Wisconsin primary yesterday, but in an interview with the New York Daily News editorial board he stumbled and revealed that in some ways his approach to reform is akin to that of Donald Trump - vague generalities and few details.  Indeed, when Sanders strays from a few of his standard talking points, he has difficulty explaining how he would implement the list of benefits that are attractive to his followers.  This phenomenon is one of the reasons I have not been able to get on board the Sanders bandwagon.  Talking Points Memo looks at the near disastrous interview.  Here are highlights:

Sen. Bernie Sanders (I-VT) struggled to detail how he would break-up the big banks and move toward a "moral economy" during an interview with the New York Daily News editorial board published Monday.

A member of the editorial board asked Sanders what authority he would have as President to break-up banks like JPMorgan Chase and Bank of America.
Sanders answered:

Well, by the way, the idea of breaking up these banks is not an original idea. It's an idea that some conservatives have also agreed to. You've got head of, I think it's, the Kansas City Fed, some pretty conservative guys, who understands. Let's talk about the merit of the issue, and then talk about how we get there.

Right now, what you have are two factors. We bailed out Wall Street because the banks are too big to fail, correct? It turns out, that three out of the four largest banks are bigger today than they were when we bailed them out, when they were too-big-to-fail. That's number one. Number two, if you look at the six largest financial institutions of this country, their assets somewhere around $10 trillion. That is equivalent to 58% of the GDP of America. They issue two-thirds of the credit cards in this country, and about one-third of the mortgages. That is a lot of power. And I think that if somebody, like if Teddy Roosevelt were alive today, he would look at that. Forgetting even the risk element, the bailout element, and just look at the kind of financial power that these guys have, would say that is too much power.

"OK," an editorial board member responded, according to a Daily News transcript, before pressing Sanders for more specifics about the policy plan.

"How you go about doing it is having legislation passed, or giving the authority to the secretary of treasury to determine, under Dodd-Frank, that these banks are a danger to the economy over the problem of too-big-to-fail," Sanders said.

If the banks were to be broken up, the editorial board asked, what would happen to the hundreds of thousands of employees who would be affected?

The senator also suggested the Justice Department was not forceful enough in prosecuting Wall Street executives.

"I'm saying, a Sanders administration would have a much more aggressive attorney general looking at all of the legal implications," he said.

When pressed for specific statutes that could be invoked to bring charges, Sanders couldn't answer.

"Do I have them in front of me, now, legal statutes? No, I don't," he said. "When a company pays a $5 billion fine for doing something that's illegal, yeah, I think we can bring charges against the executives."

Don't get me wrong.  I like some of Sanders' concepts, but without a semblance of a plan of how he would get legislation passed, his promises end up akin to Donald Trump's slogan that he'd "make America great again"   while offering no details  or policy positions.
Posted by Michael-in-Norfolk at Wednesday, April 06, 2016