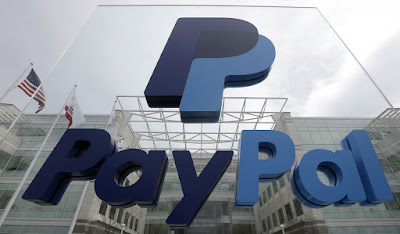 The anger being unleashed by corporate America in the wake of that state's passage of a bill that repeals all LGBT non-discrimination protections statewide is truly epic.  What is almost laughable is how unprepared the Republican nitwits who rammed this bill through have been to deal with the fury that they have unleashed.  A small amount of research and consideration of the Supreme Court ruling in Romer v. Evans would have suggested to remotely sentient individuals that HB 2 was a very, very bad idea - at least outside of spittle flecked, knuckle dragging Christofascist circles.  One can only hope that Virginia Governor Terry McAuliffe is burning up the telephone lines contacting the businesses that are announcing plans to cancel expansion in North Carolina and soliciting them to move to Virginia.  The opportunities would seem to be numerous between the corporate announcements and conventions being cancelled and/or relocated.   Fist, here are highlights from Paypal's announcement that it is cancelling plans for a global operation in Charlotte:

Two weeks ago, PayPal announced plans to open a new global operations center in Charlotte and employ over 400 people in skilled jobs.  In the short time since then, legislation has been abruptly enacted by the State of North Carolina that invalidates protections of the rights of lesbian, gay, bisexual, and transgender citizens and denies these members of our community equal rights under the law.
The new law perpetuates discrimination and it violates the values and principles that are at the core of PayPal’s mission and culture.  As a result, PayPal will not move forward with our planned expansion into Charlotte.
This decision reflects PayPal’s deepest values and our strong belief that every person has the right to be treated equally, and with dignity and respect. These principles of fairness, inclusion and equality are at the heart of everything we seek to achieve and stand for as a company. And they compel us to take action to oppose discrimination.

But Paypal is not alone in rethinking expansion in North Carolina.   Marketing concern Red Ventures is rethinking a 500 person expansion as well.  Here are highlights from Fox 46 News:

Red Ventures is also considering pulling out of their 500 person expansion in 2016 after HB2 was passed.

"HB2 does not reflect the values of our people, our state or our democratic process. The speed with which it was passed and lack of constituent input enabled a select group of North Carolina representatives to ignore their responsibility to represent the whole state and, instead, eviscerate the civil rights of North Carolinians," The CEO

Elias said as a CEO who is committed to expanding our Charlotte presence by 500 people in 2016 and thousands after that, I am forced to seriously reconsider adding more jobs in a state that tolerates discrimination.

The largest threat to North Carolina's economy, however, comes from the specter of lost federal funding.  Here are excerpts from the Washington Post:

At least five federal agencies are weighing whether to withhold funds from North Carolina in response to a recently enacted state law that blocks protections for gay, lesbians and bisexuals, and prohibits transgender individuals from using bathrooms that are not the same as the gender they were assigned at birth.

The ongoing reviews at the Education, Transportation, Labor, Housing and Urban Development, and Health and Human Services departments are not yet complete, and it is unclear how much federal money might be involved. But the Obama administration’s decision to scrutinize what White House press secretary Josh Earnest described as “both policy and legal questions that are raised by the passage of this law” suggests that the measure signed by Gov. Pat McCrory (R) last month could have major implications for his state.

Earnest said that “individual agencies are undertaking” the review, and the White House had not issued specific guidance on how to proceed. But he emphasized that President Obama said that “ensuring that individual Americans are not discriminated against because of who they love is something that the president feels strongly about,” and he was not surprised that North Carolina officials “are feeling some pressure” on the issue.

David Stacy, government affairs director for the Human Rights Campaign, noted that a host of federal laws — from Title IX in the Education Amendments of 1972 to the Affordable Care Act and Violence Against Women Act — have anti-discrimination language that suggests North Carolina could stand to lose funding on a range of fronts.


Personally, I want to see North Carolina crucified.  Ditto for Mississippi which just enacted an even more heinous and expansive law granting special rights to Christofascists.