What Donald Trump's Popularity Reveals About the South 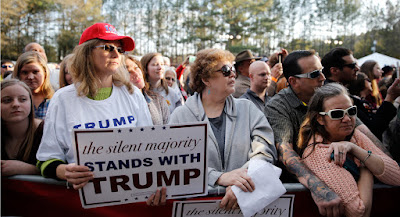 At this point I have lived the majority of my life in the South, including four years in Alabama.   While the Hampton Roads area of Virginia is less and less part of the South due to the influx of people from Northern states, there remain pockets that are very Southern when it comes to claimed religiosity, racism and hypocrisy.  The South can display charm and supposed hospitality, but depending where you are, beneath the veneer of graciousness lucks a would be KKK supporter.  As a column in Politico notes, the rise of Donald Trump's popularity in the South has done much to display the reality that while much has changed, the stain of racism and a fear of modernity and those who are different is still alive and well.  Folks may sit in the pews on Sunday morning, but they make a mockery of the Gospel message the rest of the week.  Here are excerpts:

The Republican South so far has rallied behind Donald Trump, a northerner without any of the grassroots evangelical credibility that is supposed to bind conservatives here—a candidate whose main appeal, in fact, has been coded appeals to the same hatred that drove [Dylnn] Roof to pick up a gun.

Make no mistake, Trump’s embrace by millions of people in my region isn’t solely about economic angst. It is also about the kind of pent-up fear—made up of barely submerged racism and profound ignorance—that a reader in Myrtle Beach, South Carolina, expressed to me shortly after Barack Obama’s election: “I think he’s gonna enslave us,” he said. “Look what we done to ya’ll.”

Trump was, in many ways, the optimal antidote for that fear, and the racism behind it. It was Trump who more than anyone kept “birtherism” in the mainstream through the first term of Obama’s presidency, feeding belief in the deep South that this oddly-named president was not even American. And now it is Trump who has brilliantly exploited and drawn out the racism that the civil rights movement drove underground 50 years ago, but which is now resurfacing.

All this has thoroughly removed the scales from my eyes. I grew up watching the South become more tolerant. My son will have far more opportunities here than my father did. But I now know just how deeply the region is stuck in our ugly past. I now realize that little boy I saw 26 years ago more likely than not grew up to harbor the same racial hatred his parents did. I’m not forced to sit on the back of the bus; I’m not restricted from swimming in some parts of the Atlantic. But too often, that overt progress has been used as an excuse by residents to pretend that further civil rights gains would be “giving” minorities something they don’t deserve.

Trump’s rise in both South Carolina and throughout the South proves why celebrating that change—the removal of a flag that should not have been flying—was in many ways premature, if not misleading.

There’s little reason to pretend, as some are, that the anger Trump has tapped into in the South, which has propelled him to a near sweep of Southern states and to the top of Republican polls, is primarily about white Southerners’ anger about their changing economic fortunes. If that were the case, Southerners would also be embracing Bernie Sanders, another candidate seen as a political outsider running on a populist economic message.

Instead, while Sanders eagerly touts his civil rights past, Southerners—including those who long claimed the principles espoused by their conservative Christian faith influence their every decision—have picked the one presidential candidate who claimed (at first) he didn’t know enough about the Ku Klux Klan to have an opinion about it—the one candidate the Klan has said it is using as a recruiting tool.

They picked the one candidate who initially excused two white men who beat up a homeless Hispanic man, saying they were following Trump’s lead.

They picked the one candidate sued by the Justice Department in the 1970s for telling employees to avoid renting property to black people.

They picked the one candidate who stoked the fires that helped lead to five young black men in New York being falsely accused and convicted in the Central Park jogger case in 1989.

They picked the one candidate who proudly said out loud what they’ve been saying throughout the entire Obama era in email chains and private discussions after Sunday morning church services: That the nation’s first black president isn’t a real American and needed to prove he belonged in a way no other president, or presidential candidate, ever had to do.

According to widely-cited exit polls and other surveys, 70 percent of Trump supporters in South Carolina wanted the Confederate flag to keep flying, compared with 31 percent of South Carolinians overall. Twenty-one percent of his voters in the state either believe whites are superior or aren’t sure; 20 percent don’t like the Emancipation Proclamation.

But none of that can detract from the fact that Trump’s supporters also include white nationalist groups like the American Freedom Party and American Renaissance whether he wants them to or not. To them, Trump has come as close to sounding like former Klan wizard and Louisiana Rep. David Duke that a politician can—and still potentially win high national office. That should give pause to the millions of other Trump supporters, or would-be supporters, who are ignoring his bigotry because they are so desperate to see a political sea change. Too many of us have been convinced that quiet equals peace. That’s the one good thing about the loudmouth that is Donald Trump. It’s hard to remain silent in the face of the ugliness he has highlighted like no other politician has in quite some time.

He isn’t Dylann Roof, deliberately targeting a single African-American church. No, he’s potentially more dangerous because he targets the vulnerable wherever they are. There aren’t enough Americans, in the South or the Republican Party, primarily motivated by hate to have fueled his rise. His presence on the national stage is scary because too many otherwise good people—the kind who would give comfort to a black orphan or pray for a sick Hispanic friend—are turning a blind eye to his peculiar brand of bigotry and angrily following his lead.
Posted by Michael-in-Norfolk at Monday, April 04, 2016