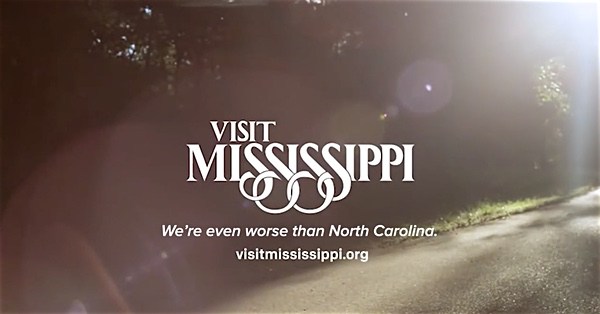 Seemingly having learned nothing from the experience of Indiana last year and the current tumult surrounding Georgia and North Carolina, Mississippi Republicans just enacted a pro-Christofascist law that makes the abortion passed in North Carolina pale in comparison.  The Bill, House Bill 1523, prevents state and local government agencies from taking action against state employees, individuals, organizations and private associations that deny service based on religious beliefs.   The bill is so broad that businesses can discriminate against heterosexuals as well if they believe the straigh customers are "living in sin."  A piece in the New York Times looks at the shocking special rights granted to right wing Christians in Mississippi.  Here are highlights:

The divide between social conservatives and diversity-minded corporations widened Tuesday with developments in Mississippi and North Carolina related to the rights of gay, lesbian bisexual and transgender people in both states.

Mississippi’s governor signed far-reaching legislation allowing individuals and institutions with religious objections to deny services to gay couples, and the online-payment company PayPal announced it was canceling a $3.6 million investment in North Carolina.

The measure signed by Gov. Phil Bryant of Mississippi allows churches, religious charities and privately held businesses to decline services to people if doing so would violate their religious beliefs on marriage and gender. Gov. Nathan Deal of Georgia, under pressure from business interests, two weeks ago vetoed a similar bill passed by the state Legislature.

Gov. Pat McCrory of North Carolina and Mr. Bryant join a list of Republican governors who are being squeezed between the business groups that have formed the core of their support and conservative state lawmakers pushing back against recent gains made by advocates of gay rights and same-sex marriage.

In Mississippi, objections have been raised by companies such as Tyson Foods, MGM Resorts International, Nissan and Toyota, all of whom are major employers in the state.

Email ThisBlogThis!Share to TwitterShare to FacebookShare to Pinterest
Labels: Christofascist embrace of ignorance, license to discriminate laws, Mississippi Republicans, religion as a justification for evil, special rights for Christofascists