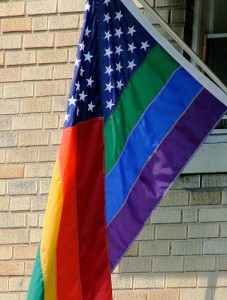 After the euphoria of last years Supreme Court marriage ruling in Obergefell v. Hughes, the recent successes of the Christofascist in pushing their tawdry whore-like supporters in the Republican Party to enact anti-LGBT laws that grant special privileges to animus motivated "conservative Christians" has been frightening.  Indeed, but for its Republican governor, Virginia would be saddled with a heinous license to discriminate law.   Longer term, however, these successes may be paving the way for the ultimate defeat of Christofascist backed candidates.  Two pieces look at the possible longer term loss on the part of Christofascist forces.  One appears in The Daily Beast.  The other is in The State, one of South Carolina's largest newspapers.  The State piece is interesting because (i) it shows GOP Governor Nikki Haley arguing that a North Carolina-like law is not needed in South Carolina, and (ii) looks at the Spartanburg Chamber of Commerce's plan to actively campaign against and anti-LGBT Republican.  Here are excerpts:

S.C. Gov. Nikki Haley said Thursday that a proposed law to limit the bathrooms that transgender people can use is not needed.

Haley said her office has not received any complaints about the issue, adding South Carolinians are respectful to people of different backgrounds.

“I don’t believe it’s necessary,” the Lexington Republican told reporters. “There’s not one instance that I’m aware of.

“When we look at our situation, we’re not hearing of anybody’s religious liberties that are being violated, and we’re again not hearing any citizens that are being violated in terms of freedoms,” she said. The S.C. Chamber of Commerce will campaign actively against state Sen. Lee Bright, a Spartanburg Republican seeking a third term this year, chamber president Ted Pitts said Thursday. The chamber had concerns about Bright’s Senate performance before he introduced his transgender bill, Pitts said. Bright has three GOP primary challengers.

“Sen. Bright is trying to create a political crisis that doesn’t exist to save his political career,” said Pitts, a former chief of staff to Haley. “Meanwhile, our state has real issues we need to address, including crumbling roads and a (workforce) skills gap. We’ll be working on electing serious senators next year who will be focused on addressing the state’s infrastructure and workforce needs, and limiting government’s role in our lives.”

Haley also questioned whether Bright’s proposal, introduced Wednesday, could win passage in the Senate before the May 1 deadline for a bill to cross over to the S.C. House for consideration. “Nothing is going to happen with the bill this year.”

Frankly, it sounds as if Haley is positioning herself to veto the bill if it becomes necessary.  The piece in The Daily Beast expands on the blow back to Christofascist/Republican overreaching.  Here are highlights:

North Carolina’s Republican legislature and governor used what they thought would be their best tactic to repeal anti-discrimination ordinances, one that that worked in Houston and elsewhere: that pro-LGBT laws would let men use women’s restrooms.

And yet, the only way North Carolina could pass the law was in a bizarre special session, passing a bill that no one seems to have read. The bill was so overbroad, it was like putting out a match with a fire hose. And it was passed like a midnight massacre, suddenly and taking everyone by surprise.

This may seem like a victory, but in the long run, it will go down as a loss. The reaction has been swift, from Fortune 500 companies to religious leaders to celebrities. (Among others, PayPal just canceled plans to expand in the state.) The law has been widely condemned, and Gov. Pat McCrory is on the defensive. What he presumably hoped would help shore up his base now threatens to alienate the moderate voters he needs to win reelection this year.

But their defeat goes even further: Even within their own false context, they’re losing. This is not the way trans advocates wanted to have a public conversation about gender identity, but here the conversation is, and, not unlike same-sex marriage, trans people are persuading people simply by telling the truth.

There are little transgender girls out there, kids like Coy Mathis who were born biologically male but who have dressed like girls, played with “girl toys,” and understood themselves to be girls since as long as they could talk. And there are butch transgender men like the bearded, country-boy-looking James Sheffield, whose Twitter post to Gov. McCrory—“It’s now the law for me to share a restroom with your wife”—has gone viral.

Thanks to North Carolina’s odious, ignorant law, these folks are now able to tell their stories to wider audiences. And when they connect, on a human level, with reasonable people willing to listen, they are their own best advocates.

The second tactic of the Right has been to talk about religion.  The Christian right can no longer directly demonize gays and transgender people, so it has to lie and even the lies are backfiring.

In the wake of last year’s loss on same-sex marriage, the Christian Right has begun to act tactically, attacking what it perceives to be the LGBT equality movement’s weakest links. And yet amazingly, this strategy is backfiring. Not only is the right failing to make their easiest cases, they are hardening opposition in those very cases, losing key battles in the areas of transgender rights and religious freedom.

Under clear First Amendment precedent, no church could ever be compelled to host any wedding of any sort. The government can’t make an Orthodox synagogue host an interfaith wedding, and it can’t make a Catholic church host a gay wedding. This is how it is, how it should be, and how it’s going to stay.

But the Right’s attempt to move out from there to include for-profit businesses (bakers and otherwise) has run into trouble, most recently in Georgia, where the Republican governor, Nathan Deal, vetoed a “religious freedom” bill that would have enabled businesses to discriminate for religious reasons, under heavy pressure from dozens of large corporations including the National Football League.

Ultimately, though, what the left has that the right doesn’t have is truth. I’m not naïve enough to think that’s enough to win every battle but it certainly does help. Just as gay men are not getting married in order to more effectively recruit youngsters to homosexuality, trans women are not transitioning in order to spy on the ladies room. There are actually facts of the matter, and they’re almost all on one side.

That, I think, is why these tactics are backfiring. For an ostensibly religious movement, they’re awfully cynical maneuvers. And sometimes, lying to folks is a bad idea.

Sadly, the most common trait of the "godly folk" is their willingness to deliberately lie and their hatred towards anyone the deem "other" - a list that includes blacks, Hispanics, LGBT individuals, non-Christians, etc., etc.  Indeed, the hate just about everyone but their fellow extremists.