Conservatives Suffer Huge Loss at the U. S. Supreme Court 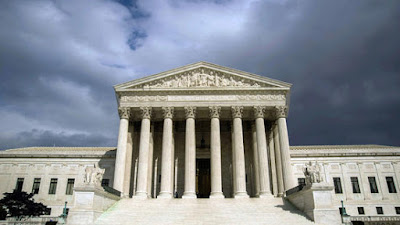 One of the consistent themes and agenda items of the Republican Party and those who euphemistically call themselves "conservatives" rather than racists or white supremacists has been to disenfranchise minority voters wherever possible and, as was attempted by plaintiffs in Texas, to skew voting district apportionment to favor Republicans.  With the white percentage of the overall population falling and the GOP make no effort to be more welcoming to those who are not angry, greed driven, racist whites, about all the GOP has to grasp onto is limiting and/or diluting the minority vote of all stripes.  Today, in Evenwel v. Abbott, the Supreme Court by a unanimous ruling killed for now an attempt to dilute the vote in urban and heavy minority districts.  A column in the Washington Post explains why the ruling is important.  Here are highlight:

The Supreme Court issued a decision Monday on the widely anticipated “one person, one vote” case, unanimously ruling that states can draw their voting districts based on total population as opposed to just the number of people who can vote.

The case, Evenwel v. Abbott, featured arguments on a pair of state Senate districts in the Dallas area. Because Texas draws its districts based on total population — including non-citizens who are not eligible to vote — some voters in the suburban districts argue that their votes are “diluted” compared with those of neighboring urban districts that are home to many immigrants.

The case essentially revolved around who should be represented by our lawmakers, and there was a lot at stake. If the Supreme Court ruled that drawing districts according to total population was unconstitutional — thereby mandating that virtually all states redraw their districts —experts projected that Republicans would have gained a signification advantage in state elections throughout the country.

Conservatives in Texas argued that only eligible voters should be relied upon when redistricting, claiming the U.S. Constitution forbids counting immigrants, children, and prisoners, who are not legally eligible to vote.

"The plaintiffs alleged the Texas legislative map effectively diluted the representation of citizens in rural, Republican-leaning areas in favor of Democratic-trending cities like Houston, where the population includes immigrants and children who are ineligible to vote," the Wall Street Journal reports.

"As the Framers of the Constitution and the Fourteenth Amendment comprehended, representatives serve all residents, not just those eligible to vote," Justice Ruth Bader Ginsburg who authored the decision, wrote.

“As history, precedent, and practice demonstrate, it is plainly permissible” to use total population for state redistricting, Justice Ginsburg added, as Buzzfeed notes.

I am not a lawyer, but it seems to me that this was an exceptionally scummy attempt by the Republican reactionaries to overturn the "one man one vote" decisions of Baker v. Carr and, particularly, Reynolds v. Sims (1964), which held that "Legislators represent people, not trees or acres. Legislators are elected by voters, not farms or cities or economic interests."

Sadly, this was not embraced unanimously by the Supreme Court justices, a couple of whom felt that it was perfectly fine for the votes of some people to be worth many times more than the votes of other people, an idea that before the advent of the Roberts court, decent people throughout the world, and even formally if not in practice totalitarian regimes, had cast in the landfill of history.

Somewhat separately, I am somewhat surprised that Justice Uncle Clarence Thomas has not yet called for the reinstitution of Plessy v. Ferguson.