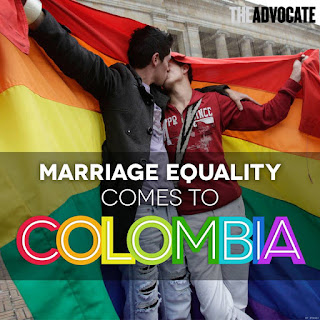 Even as Republicans in the USA try to turn back time and give special rights to Christian extremists, other parts of the world are moving to embrace modernity and modern knowledge of sexuality.  A case in point is Columbia - for knuckle dragging Christofascists, Columbia is a nation in South America - whose top court ruled 6-3 in support of marriage equality.  It's telling when nations once viewed as backwaters and/or third world are now more modern and progressive in their laws than US states, especially those in the American South.  Here are highlights from The Advocate  on this development:

The decision was not wholly unexpected, as the court had long been considering a case filed by four same-sex couples who argued that the state was required to provide equal marriage rights for same-sex couples.

Colombia becomes only the fourth Latin American nation to fully embrace marriage equality. Same-sex couples have been able to wed in Argentina since 2010, and in Brazil and Uruguay since 2013. Several Mexican states have embraced marriage equality — beginning with Mexico City in 2010 — and that country’s high court has ruled those marriages must be recognized nationwide.

Moments after the court’s decision was made public, equality advocates gathered outside the Palace of Justice, which houses the court, in Bogotá. Wearing rainbow flags and carry pro-equality signs, demonstrators chanted “Iguales en impuestos, iguales en derechos,” according to video (below) from Colombian newspaper El Espectador. The chant translates to: “Equal in taxes, equal in rights!”

There are some who try to claim that Christianity has improved mankind's existence.  I beg to differ. The concepts of equality, logic, reason and knowledge are Enlightenment values, not a result of Christianity.  Indeed, the more deeply "Christian" states and nations are, the more embracing they are of ignorance and bigotry.  It's not a coincidence that the level of education steeply declines as one moves from liberal Christian denominations downward to the most fundamentalist denominations. Religion is the enemy of knowledge, modernity and equality.
Posted by Michael-in-Norfolk at Friday, April 08, 2016