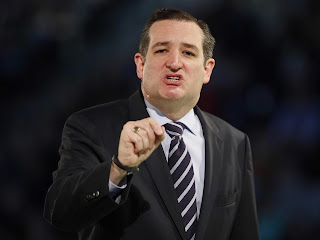 While I find all of the Republican presidential candidate to be frightening (Kasich is just as extreme as Cruz and Trump, but knows when to shut his mouth), perhaps the scariest is Ted Cruz, a true extremist who seemingly is every bit as insane as his lunatic father, Rafael Cruz, an anti-gay extremist extraordinaire.   With the GOP establishment literally many years too late in recognizing the whirlwind it created by welcoming Christofascists, white supremacists and know nothings into the party, Cruz is threatening a revolt of the swamp fever afflicted party base if either he or Donald Trump are not crowned as the party nominee.  A piece in Mother Jones looks at Cruz's threat. Meanwhile, a piece in The Advocate looks at the insanity and extremism that has enveloped Cruz under the tutelage of his nutcase father.   First, these highlights on Cruz's threats to the party establishment:

Ted Cruz, campaigning in Wisconsin ahead of Tuesday's primary, says that if the Republican Party establishment were to anoint a candidate other than the two leaders in primary and caucus voting—Cruz and Donald Trump—at the party convention this summer, the GOP base would "quite rightly revolt."

Talking with reporters in the basement of a Masonic Center in Madison, Wisconsin, shortly before recording a town hall with Fox News in the auditorium upstairs, Cruz dismissed the concept of a new candidate like Ryan entering the fray. Currently, the Republican National Convention's Rule 40 mandates that a candidate must win a majority of the vote in at least eight states in order to get his or her name nominated at the convention, effectively preventing anyone other than Trump or Cruz from being placed in contention. Cruz rejected any suggestion that the convention would scrap Rule 40, as has been widely speculated.

"Both Donald and I have been very clear," Cruz said. "We shouldn't be changing the rules because Washington is unhappy with how the people are voting."
He added, "The rules are the rules."

Still, should party leaders attempt to nominate a third candidate, Cruz painted a dark vision for how that would go down. "This fevered pipe dream of Washington, that at the convention they would parachute in some white knight who will save the Washington establishment, it is nothing less than a pipe dream," Cruz said. "It ain't gonna happen. If it did happen, the people would quite rightly revolt."

Cruz's concept of a revolt sounds far more peaceable than the rioting Trump has envisioned if he wins the voting but loses at the convention. Cruz said that if a convention selects a third candidate, "the voters would naturally say, 'To heck with you, we're staying home.'"

Personally, I can't summon a shred of sympathy for the so-called GOP establishment.  They made this entire catastrophe happen.  They are now reaping what they sowed.   As for Ted Cruz's sinister extremism and dangerous mindset, here are excerpts from The Advocate:

“Rafael Cruz is an extremist,” Chuck Smith, CEO of Equality Texas, tells The Advocate. “He is the senator’s role model. Rafael Cruz spoke at the World Congress of Families event in Utah with a gay-bashing lineup of hateful speakers, and he is Ted’s surrogate traveling across the country on the campaign trail bashing gay people. Like father, like son.”

Ted Cruz, for instance, calls the Supreme Court’s marriage equality ruling “lawless” and “fundamentally illegitimate,” but his father says it’s the work of the devil. “The devil overplayed his hand with that decision on June 26,” Rafael Cruz said in a speech last August, predicting that godly Americans will rise up against it.

Among Rafael Cruz’s other antigay greatest hits: At the World Congress of Families event last November, he said gay people want to legalize pedophilia, starting with an effort to strike down age-of-consent laws. Indeed, he has frequently described LGBT people as sexual predators. He has also said marriage equality is part of a government plot to “destroy the concept of God” and establish socialism in the United States.

Rafael Cruz seems to have long believed his son was destined for great things. “Essentially his father groomed him for this moment,” conservative Iowa radio talk show host and Ted Cruz backer Steve Deace told The Boston Globe in January, as father and son were campaigning in the state.

“By the time Ted Cruz was 9, his father was providing heavy doses of conservative Christian politics at the dinner table,” wrote Globe reporter Tracy Jan. “By 13, the younger Cruz had memorized the Constitution and through high school toured the state of Texas, delivering speeches on free market economics and the Constitution.”

[H[e [Refael] now touts himself as an ordained minister. His theology goes beyond traditional evangelical and fundamentalist views. He “is an advocate of Christian dominionism, which essentially holds that fundamentalist Christians should take over, well, just about everything,” David Corn wrote in a February Mother Jones article.

Corn described Rafael Cruz as a “freelancing evangelical,” and that pretty much sums it up. He has claimed to be a pastor at a church in Dallas, but there is no record of such an affiliation, according to a Washington Spectator investigation. That investigation also found that the Bible college he claims to have attended doesn’t exist.

However, the conservative Christian crowds he draws apparently haven’t questioned his credentials, and religious right leaders see him as an asset to his son’s campaign. “He’s a clarifying check that Ted’s the real deal,” antigay Iowa activist Bob Vander Plaats told the Globe.

The lack of distance between father and son shows how dangerous a Ted Cruz presidency would be, Smith tells The Advocate. He “lets his father say all the fiery gay-bashing rhetoric, but Ted Cruz will implement that rhetoric in his policies and appointments,” Smith says. “He is the worst candidate in the race, and I have no doubt he will discriminate against gay and transgender people all over the United States if he is elected president.”

“While Donald Trump is disturbing, Ted Cruz is dangerous, . . .

One thing I have noted over the years as I have watched and kept an eye on the batshitery of the far right Christians: nowhere else other than in Christofascist circles can one get away with peddling outright lies about one's credentials and claim to have attended non-existent  "bible colleges" and it simply doesn't matter.  It speaks volumes about oth Cruz's and those who support them.