American Allies on an Execution Spree 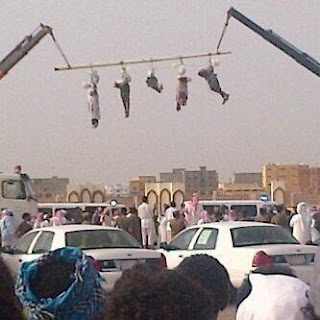 Once again we see America turning a blind eye to horrific human rights abuses under the guise of "fighting terrorism" by putative allies who have less than clean hands themselves when in comes to sponsoring the very terrorism that they claim to oppose.  Among the worse offenders?  Saudi Arabia, of course, where there is no religious freedom and a new jihad has been launched against LGBT individuals.  As noted in prior posts, Saudi Arabia is the number one funder of Islamic extremism worldwide.  Along side of Saudi Arabia is another false ally, Pakistan.  A piece in The Daily Beast looks at the foul regimes that America is propping up and squandering money on.  Here are excerpts:

Phony terrorism strategies employed by some of America’s key counter-terror partners are at the heart of a shocking surge in death penalty usage, which has reached its highest level in a quarter of a century.

Amnesty International recorded 1,634 state-sanctioned executions in 2015—more than 50 percent higher than in the previous year.

The regimes in both Pakistan and Saudi Arabia—where the increase has been starkest—have used false claims about fighting terrorism to justify a dramatic increase in the execution of prisoners convicted of conventional crimes. The U.S. has given Pakistan more than $13 billion in military aid since the invasion of Afghanistan but seems to exert little influence over the nation’s counter-terrorism strategy.

“They [the U.S.] should speak out about a country like Pakistan using a counter-terrorism justification for the horrific scale of executions,” Audrey Gaughran, a director at Amnesty International, told The Daily Beast. “Very few of the executions in 2015 were for people who’d been convicted of terrorism-related offenses. The reality of who is being executed doesn’t match up with the rhetoric.”

By the end of the year, 326 people had been put to death—the highest number of executions Amnesty International has ever recorded for Pakistan, putting it third in the world behind Iran and China.

Joining them in the 2015 top five—with the U.S.—was Saudi Arabia, where there has been another huge surge in executions under the guise of a crackdown against terrorism.

Saudi Arabia executed 158 people last year almost twice the 2014 figure, and more than any other year since 1995.

“The on-going surge of executions is deeply uncomfortable for Saudi Arabia’s Western allies who collaborate so closely on intelligence and security issues,” said James Lynch, Amnesty’s deputy director for the Middle East. “The Saudi Arabian authorities suggest that these executions are carried out to fight terror and safeguard security but it’s clear that they are also using the death penalty in the name of counter terror to settle scores and crush dissidents.”

The vast majority of those executed in Pakistan were not convicted of terrorist offenses, or had terror charges added to their cases with little or no justification. Many of those on death row had no resources to fund an adequate defense, and those executed included people with mental and physical impairments and juveniles. Under international law, executing minors is not permissible.

One of those put to death in Pakistan last year was Muhammad Afzal, who was 16 when he robbed and killed someone. In his final words before he was hanged, he said the police told his family to pay a 60,000 rupee bribe or they would add a bogus terrorism charge to his rap sheet. That is equivalent to only $600, but his family had no means to pay.

“We’re very concerned that this is happening,” said Gaughran. “The death penalty is being portrayed as a way that the government looks like it’s doing something about terrorism.”

Sadly, as it has done so often in the past, America is supporting despotic governments and making a mockery of its alleged concerns about human rights.  When these regimes fall, it shouldn't come as a surprise that the new regimes will be anti-American.

Posted by Michael-in-Norfolk at Wednesday, April 06, 2016