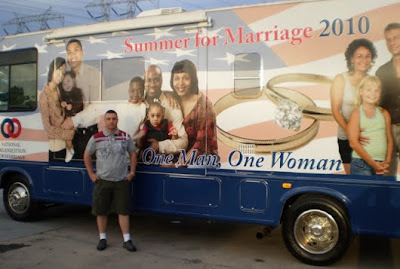 Jeremy Hooper at Good As You first broke the story of how Louis J. Marinelli (shown in the photo above) who coordinated the National Organization for Marriage's national bus tour last year and who had maintained NOM's Facebook page has left that organization and issued a statement that he now fully supports civil marriage for same sex couples. If you read his statement on his blog which can be found here, two things stand out.
*
The first is that by meeting same sex couples (who typically far out numbered NOM supporters at tour stops) on the bus tour Marinelli, was forced to face the reality of our lives and the fact that we are real people with real lives and not some faceless propaganda construct with an alleged agenda of destroying society. To me, this statement underscores just how critically important it is for LGBT individuals and couples to not hide who they are. Yes, it can be unnerving - even down right scary - at times to be true to who you are, but it is critical to put real faces on what it means to be LGBT. Time and time again, I have found that when confronted with living, breathing fellow humans, many people simply find it impossible to continue to cling to the stereotypes and negative depictions disseminated by the professional Christian hate groups. One of my clients, for example, is a case in point and he will admit that knowing me and other gay professionals forced him to totally rethink old prejudices. Here's what Marinelli said about meeting LGBT couples on the tour:
*
Having spent the last five years putting all of my political will, interest and energy into fighting against the spread of same-sex marriage as if it were a contagious disease, I must admit that it is hard for me to put the following text into words let alone utter them with my own voice. . . . the one thing that is for sure is that I have come to this point after several months of an internal conflict with myself. That conflict gradually tore away at me until recently when I was able to for the first time simply admit to myself that I do in fact support civil marriage equality. If there is an issue of shame, it is a result of acknowledging the number of people I have targeted, hurt and oppressed.
*
Even though I had been confronted by the counter-protesters throughout the marriage tour, the lesbian and gay people whom I made a profession out of opposing became real people for me almost instantly. For the first time I had empathy for them and remember asking myself what I was doing.
*
I really came to understand that gays and lesbians were just real people who wanted to live real lives and be treated equally as opposed to, for example, wanting to destroy American culture. No, they didn’t want to destroy American culture, they wanted to openly particulate in it.
*
The second thing that is striking about Marinelli's conversion is his recognition of the hate basis of NOM's anti-gay propaganda and the dehumanization of other citizens that is its core. I've noted before the parallels between the Nazi dehumanization of Jews and the Christianists' efforts to dehumanize gays. Here's what Marinelli says about the hatefulness of NOM's propaganda:
*
In December I came out in support of the repeal of Don’t Ask, Don’t Tell. I also removed the admins I had delegated my moderating duties to for my Facebook page.
*
Having done that, I had to pick up where they left off. I was largely taken aback by the fact that the page I created had become such a hateful place. My comments and rhetoric paled in comparison to what that place had turned into. I began to understand why the gay community was out there claiming opposition to same-sex civil marriage was all about hate.
*
I soon realized that there I was surrounded by hateful people; propping up a cause I created five years ago, a cause which I had begun to question.
*
Marinelli also goes on to embrace a point about which I and others have long argued: the fact that civil marriage and religious marriage and that the former in no way threatens the latter:
*
Lastly, I came to understand the difference between civil marriage and holy marriage as in the sacrament of the Catholic Church. Let me rephrase. I understood that but either willingly chose not to accept it or just didn’t see it. Regardless, I see it now and the significance of that is as follows:
*
Once you understand the great difference between civil marriage and holy marriage, there is not one valid reason to forbid the former from same-sex couples, and all that is left to protect is the latter. . . . My name is Louis J. Marinelli, a conservative-Republican and I now support full civil marriage equality. The constitution calls for nothing less.
*
I applaud Marinelli's candid self-reprimand for his past deeds. Not surprisingly, the hate merchants at NOM are doing a great deal of fast singing and dancing trying to distance the organization from Marinelli. Jeremy Hooper has details on this disingenuous charade here and here. As always, when Maggie Gallagher's and Brian Brown's lips are moving, it's a safe bet that they are lying.
Posted by Michael-in-Norfolk at Saturday, April 09, 2011

Good on him. That took a lot of courage!