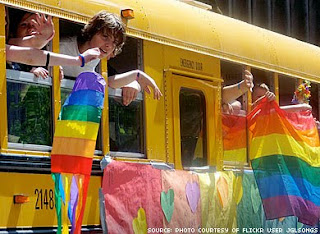 The hatred of gay people remains palpable among Christianists and members of the GOP with one foul example after another bubbling to the surface with each passing day. The "godly Christian" set want the unfettered right to bully and abuse LGBT kids and teens - often driving them to suicide as in the local York County case I've mentioned frequently - and the crazies (or perhaps simply abject political whores) within the GOP seem only too ready to jump on board the let's stigmatize and denigrate gays band wagon. One of the latest sick examples is Rhode Island Republican state representative Dan Gordon. While disingenuously saying he's not anti-gay, Gordon supports the withdrawal of state funding for schools with GSA's which he refers to as "sexual meet-up groups." One can only hope that on Judgment Day Gordon to his horror discovers that God is either a black lesbian or really pissed off gay male. The Advocate has coverage on this bigotry. Here are some highlights:
*
A Rhode Island state representative has received a barrage of criticism since posting comments online last week saying that a high school gay-straight alliance in his district is a venue for students to get “sexed-up” and should cause the school to lose state funding.
*
Club founder Cynda Martin, a senior, was quoted as saying, “With the bullying that goes on in schools today, especially for gay kids, it seemed appropriate to have a safe haven for them and their allies.” She added that she hopes to show that gays are not “horrible people.” The article also included complimentary quotes from a teacher and an administrator.
*
Republican state representative Dan Gordon. . . . said . . .if sexual meet-up groups are being promoted in our schools rather than improving test scores, that school is failing. Is it really more important for our children to get ‘sexed-up’, than learning advanced math?”
*
A war of words ensued between Gordon and other commenters on the site, with most of them defending the GSA and pointing out that the club is designed to offer students support and acceptance, not facilitate sexual hookups.
*
Gordon went on Providence radio station WPRO Thursday to explain his stance further. He said he is not antigay . . . Gordon made no apology for his statements, but he offered to attend a Tiverton GSA meeting — something about which the members have mixed feelings. Brown University radio station WBRU carried a story on the matter Sunday; listen here.
Posted by Michael-in-Norfolk at Tuesday, April 05, 2011